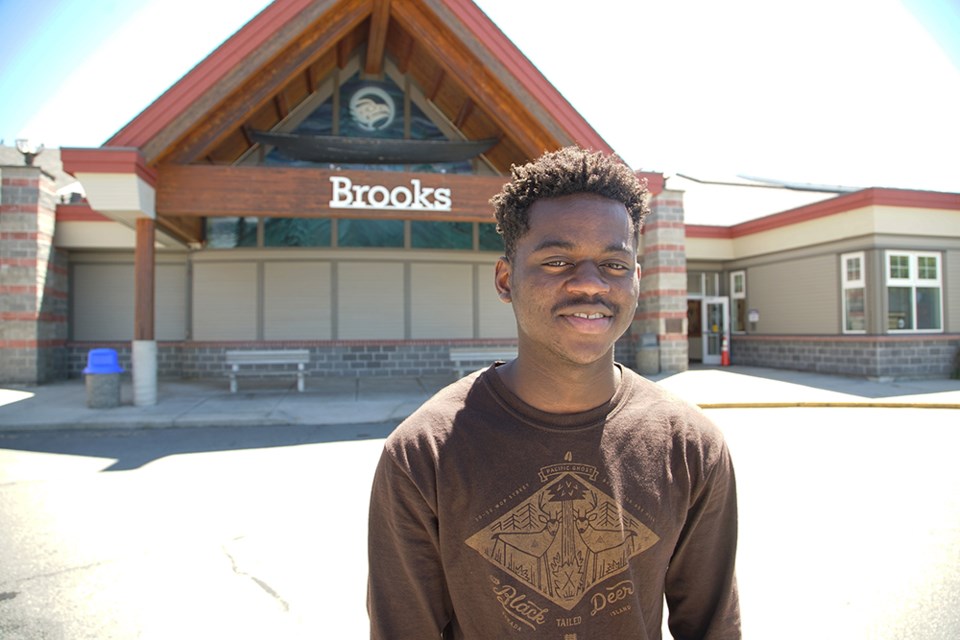 PROMISING STUDENT: Useni Mgeni will be graduating from Brooks Secondary School with a $40,000 scholarship. He wants to study engineering in a BC post-secondary institution. Paul Galinski photo

A graduating Powell River student has won a $40,000 scholarship to pursue his post-secondary education aspirations.

Useni Mgeni, a grade 12 student at Brooks Secondary School, has won the Beedie Luminaries Scholarship, which recognizes promising BC students who have faced life challenges and adversity with determination and resilience.

Mgeni came to Canada when he was 15. He is originally from the Democratic Republic of the Congo; he and family members were sponsored by Hands Across the Water, a Powell River organization.

Mgeni arrived in Powell River in 2018 and started school in grade 10 at Brooks, taking academic courses. It was an adjustment from his schooling in the Congo.

“It was tough at first making friends because, of course, it’s a big change moving from there to here, but after making connections and knowing who to talk to, it became easy,” said Mgeni. “The kids I surrounded myself with were really friendly so it made it easier to adjust.”

His intention is to become a civil engineer. He said he had been thinking about the field of architecture in his career planning.

“I’ve been interested in that field for quite a while,” said Mgeni. “When I grew up and moved here, I realized it was one of the choices I’ve always wanted to go into. When I came here, I thought it might be a great choice for my studies.”

Mgeni said he enjoys studying in the scientific disciplines that will serve as a prerequisite to his career aspirations. He said he tries as hard as he can to complete the homework that needs to be done.

“I keep myself on my toes all of the time,” said Mgeni.

To further his education, Mgeni has applied to Simon Fraser University and a couple of colleges. He hasn’t heard from Simon Fraser yet as they are awaiting transcripts. He has been in touch with Camosun College, trying to find out more about the program he wants to go into.

Mgeni has also looked into British Columbia Institute of Technology because it has an architecture program. At Camosun, he is thinking about the engineering transfer program, which would allow him to transfer into university.

“I’ve been trying to maximize all of my chances so I have various choices of where to go,” said Mgeni. “I’m just awaiting word on whether I am accepted.”

In terms of the Beedie Luminaries Scholarship, Mgeni said Hands Across the Water member Liz Brach was browsing through the internet and stumbled onto it. She suggested the scholarship as being a great choice and that it might be good to apply.

“I thought it would be a great idea to do it,” said Mgeni. “Also, [school counsellor] Jim Palm talked to me about it. After finding out more about this scholarship, I applied for it, putting in all of the required documents.”

Mgeni applied about three months ago and found out recently that he was accepted.

“I was really thrilled,” he said. “When I realized I had the scholarship, I realized how much of a burden it took off of my family and me. It’s something I really appreciate. It will cover a good portion of my expenses.”

The scholarship looked at more than academics. Mgeni said when he applied, he outlined what he had done in the community.

He has worked in addition to staying on top of his studies. He was employed at Pacific Point Market initially and now is working for Panago Pizza.

Mgeni has developed a connection with the community. He has been playing soccer, which he started playing at age 10. When he turned 17, he started playing for Powell River Villa and said he enjoyed the competitive spirit, prior to COVID-19 shutting the league down.

In terms of family, Mgeni said he has three brothers and two sisters and all came to Canada. He said his family is pleased and proud of him for securing the scholarship. Both of his older brothers have graduated from university in the Congo. His family is dedicated to higher education, he added.

Mgeni’s intention is to start university in September. He said many people in university have been participating in online classes during the pandemic but he looks forward to an opportunity to participate in an actual classroom setting, which will make it easier for him.

Mgeni said he wanted to express his gratitude to everyone who has been helping him in his academic pursuit.

“I want to thank the community of Powell River for accepting us and helping us settle in,” said Mgeni. “It was a really big change. The kindness of people in Powell River made it easier for us. It was a big adjustment.