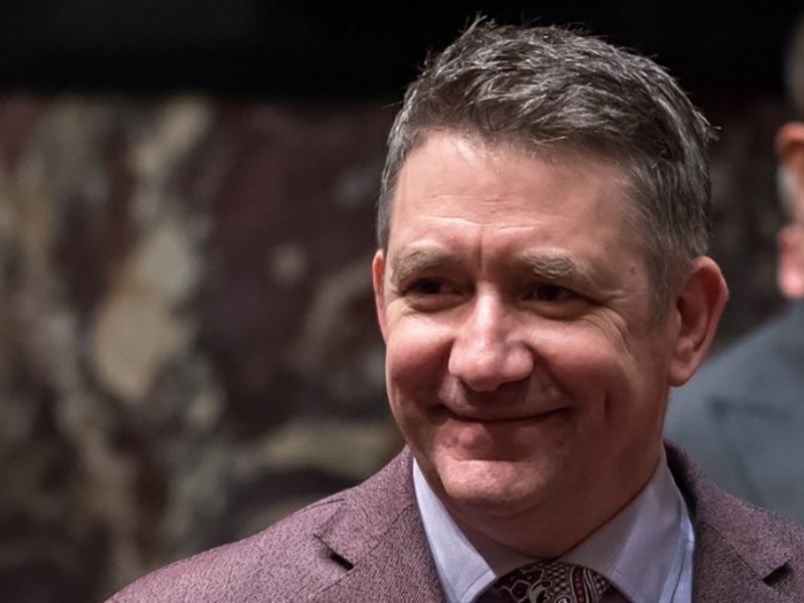 The following interview with Powell River-Sunshine Coast MLA Nicholas Simons was conducted on Tuesday, February 11, the day of the throne speech prior to the start of the fifth session of BC’s 41st parliament.

Peak: What did you make of the recent Wet’suwet’en solidarity protests outside the BC Legislature and elsewhere, and how do you feel the government has handled the situation in Wet’suwet’en?

NS: It’s really sad to see that there’s division, that people have this important issue that’s dividing people. People are motivated by, I think, important values, which are protecting the environment, protecting the rights of Indigenous people, so I don’t fault people for feeling strongly about what they believe is an important cause. I just know that it’s complicated and a complication partly due to actions of previous governments.

I do think that maybe there needs to be some more talks. My understanding of the previous court rulings, Delgamuukw [1997 Supreme Court ruling] in particular, was that the hereditary chiefs were in fact recognized as the people who needed to be talked to in particular, and at same time I recognize that elected councils were chosen by the people in those communities affected, impacted, so it’s really complicated, it’s really troubling and I don’t think it’s as simple as some of the headlines seem to say it is.

On February 13, Simons sent the following additional statement after learning further details about the protests outside the Legislature:

NS: I was very surprised and disgusted by the actions of many of the protestors and question their motivation, as they do more harm than good.

Peak: Do you think the BC Supreme Court injunction against the hereditary chiefs is compatible with the protections of UNDRIP (United Nations Declaration on the Rights of Indigenous Peoples)?

NS: I think that we have basically the conflicts of laws coming together and we haven’t figured all those things out. On first blush, they would seem to raise concerns at the very least. I think those kinds of things need to be figured out in court.

Peak: What do you make of the government’s recent announcement that ICBC will be switching to a no-fault style system?

NS: I think that when we saw how bad the problem was, when we discovered the mess that ICBC was, I think our government actually made every effort to find ways of addressing the financial situation of the crown corporation, and I think this is probably the way that will best serve the public interest. I think the Opposition might have trouble finding fault with the enhanced-care system. I was pleased with this announcement. The public will ultimately benefit.

Peak: What do you think of the announcement in the throne speech that survivors of domestic violence will be entitled to five days paid leave from work?

NS: I’ve worked with families who have undergone challenging situations and I know that when decisions are made that cause great disruption, and there’s violence involved, we want to make sure that the domestic partner is safe and the person is in a place where they can find the safety, security and support that they need in order to get past that particular part of their life. I think if you’re involved in the criminal justice system and you’ve been a victim then time to address the immediate needs I think is important without the additional burden of losing your wage.

Peak: Why was there no mention of the $400 renters’ rebate in the throne speech?

NS: I don’t know what happened to that rental rebate idea. I hope that our people are looking at the options that are available to try to make rental life more affordable. The intent in providing relief to renters is still an important part of our goals.

Peak: What are your thoughts regarding the BC Seniors Advocate’s recent report, which suggested for-profit care homes are underpaying staff and overspending on buildings?

I agree that it’s an important issue that we need to talk about, especially when it comes to service levels for seniors, and why is public money going to hands and pockets of private operators? So, fundamentally, the profit comes out of something. The recommendation the advocate made will go a long way towards exposing or at least providing accountability to how public funds are being distributed. We need to protect the workers, we need to protect the standards of care and we need to make sure that money that’s provided for direct care goes to direct care.