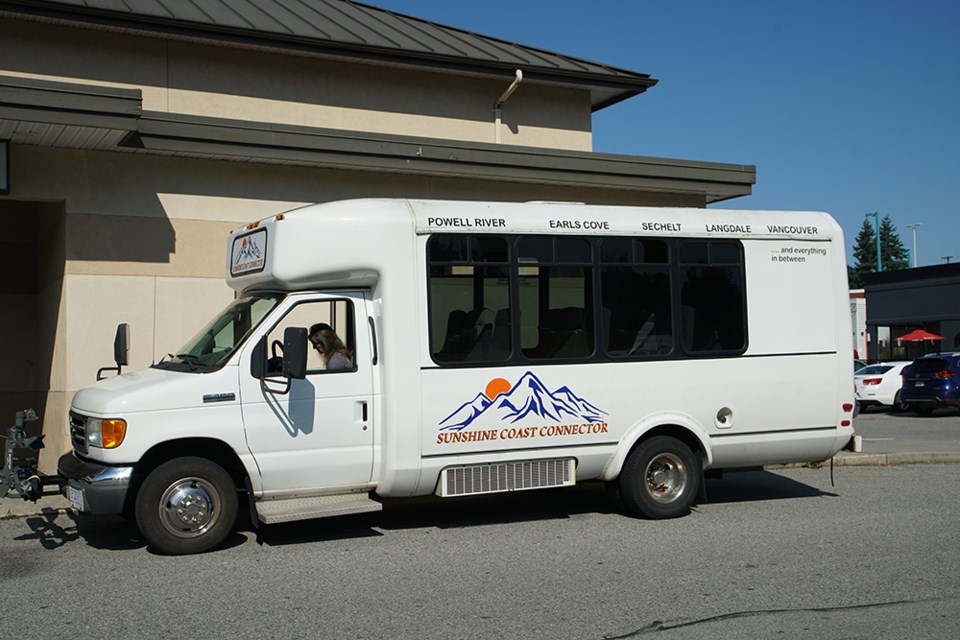 CONCERNS RAISED: Bus service to the Lower Mainland has been intermittent, with the Sunshine Coast Connector only operating on a seasonal basis. A petition in Powell River collected about 5,000 names, requesting that a full-time bus service be instituted.Peak archive photo

A petition with approximately 5,000 names has been dropped off at Powell River-Sunshine Coast MLA Nicholas Simons’ office advocating for bus service between Powell River and the Lower Mainland.

Rae Fitzgerald, one of the organizers of the petition, said she took pages and pages of signatures to Simons’ office and they were scanned to be sent to Victoria. Also turned in was a letter of the many stories that were heard when Fitzgerald and other seniors collected signatures at a table outside of Canadian Tire for the bus service petition.

“There were many stories we heard while we were sitting there about how the lack of bus service has affected so many people’s lives, both here and relatives in the city that would be coming here to visit their kids or grandkids,” said Fitzgerald.

She said she has spoken with Simons and he wanted to hear the stories as well as receive the petition.

“I can’t do any more and now I just have to hope it will work,” said Fitzgerald. “It shouldn’t be so difficult to make something happen that is so necessary on the upper and lower coast.

“I guess we didn’t appreciate it enough when we had it before, where you would get on the bus and it would take you all of the way to the airport, and if you timed your flight right, you would come out at that big airport and there would be the bus ready to bring you home.”

Fitzgerald said if the bus service can’t work as a private entity, the powers that be should arrange for the same service to be done in a subsidized way.

“I’m really not a political person – all I want is a bus,” said Fitzgerald.

She said she is pleased with the support she has received in terms of creating a substantial petition. Fitzgerald said she wanted to thank all of the people who signed it.

“We sat out there in the cold and the rain and the hail and the wind,” said Fitzgerald. “It was a terrible month of weekends but the support we got from people was tremendous. Sometimes, after the picture came out in the newspaper, people would actually park their cars and come over to the table with a pen because they actually wanted to sign it.”

She said, however, that she’s done.

“We fought for this a year and a half ago and we’re fighting for it again now,” said Fitzgerald. “I can’t do any more.”

Fitzgerald said she has heard that on the Sunshine Coast, there were regional boards, local governments and first nations governments involved, plus BC Ferries, looking at the issue of bus transportation between the qathet region and the Lower Mainland.

“I’m thinking if all of those people and organizations were looking into it, how long does it take?” asked Fitzgerald. “But again, I don’t understand how it all works and patience is not one of my strong points at all. It shouldn’t take a bunch of senior, white-haired ladies sitting at a table in the winter weather to prove it’s necessary. Somebody else who knows more than we do, who has more expertise, should deal with it now. Stop talking about it.”

Fitzgerald said when people have to go to Vancouver, as sometimes happens, there has to be a way to get there. She said driving or flying isn’t an option for everybody.