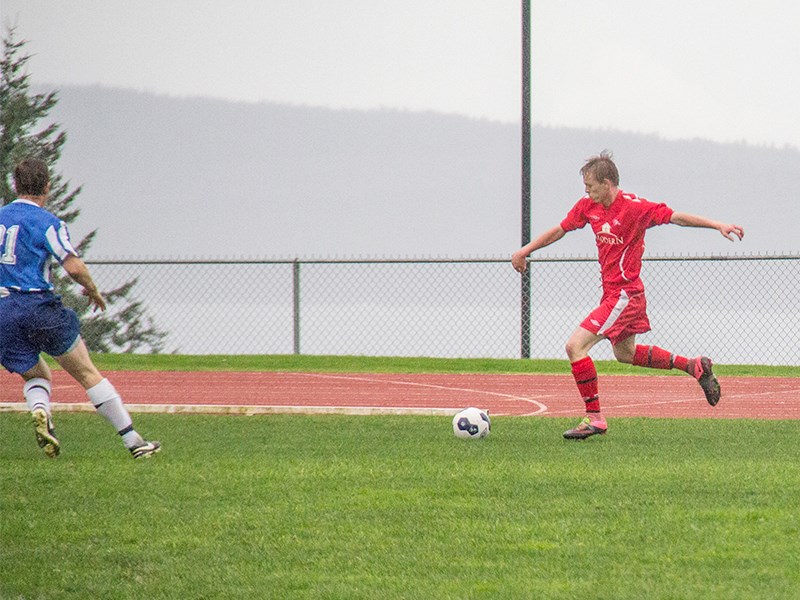 STRIKER SCORES: Rookie striker Cullen Buholzer’s goal on a penalty kick late in the game gave Powell River Villa a tie and one point on the weekend. Buholzer is one of the club’s three new players. David Brindle photo

For the first time in weeks, Powell River Villa did not go down to defeat in Vancouver Island Soccer League Division 2 action.

Although it was not a win for the local soccer club over Sooke’s Fred Milne Park Rangers, it was not a loss either.

In a game played under miserable, rainy and windy conditions at Timberlane Park, Villa played to a 1-1 tie, which moved the club up a point in league standings into seventh place.

The club had not registered a point since October 23. The result improved its record to one win, six losses and two ties, with seven goals for and 16 against.

According to McDonough, another positive is the addition of three permitted youth players brought in by Villa. Striker Cullen Buholzer, 16, and attacking midfielders James Timothy, 15, and Chris Fisher, 15, joined the roster. All three attend Brooks Secondary School.

Buholzer played the entire game for Villa and scored the tying goal on a penalty shot in the 80th minute, said McDonough.

“Timothy came in with about 20 minutes to go,” he said. “He created some chances that helped generate that goal to tie the game.”

McDonough said the new players definitely played up to the league’s level. Fisher did not enter the game.

“We want youth soccer players to know that you can make your way into Villa and play against university level players,” said McDonough. “Over the years, Villa has sent dozens of players on to universities. We want players to know this is a viable path for them.”

According to McDonough, it is unlikely that Villa will add any more new players this season.

“Ideally, we’d like to get a couple of guys every year moving up and old enough to play at this level,” he said.

For Villa’s next game on Sunday, November 27, against Vantreights FC in Victoria, McDonough said he believes a couple of the rookie players will be available.