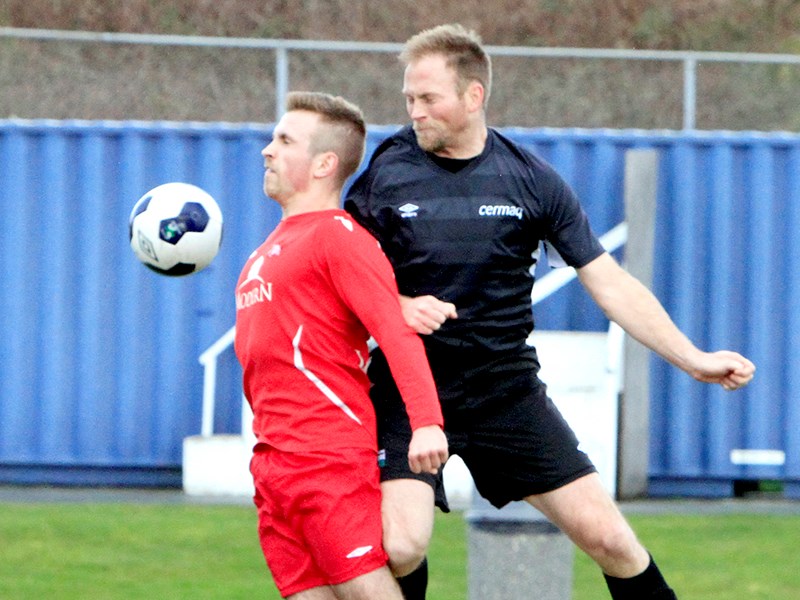 STEPPING UP: Powell River Villa’s Jeremy Prosser steps in front of an opposing player to receive and settle the ball during a game against Vancouver Island Soccer League Division 2 leaders Cermaq City Wave from Campbell River on Sunday afternoon at Timberlane Park. The game ended in a 1-1 tie. Alicia Baas photo

Powell River Villa took a first-half lead and held on to tie Vancouver Island Soccer League (VISL) Division 2 leaders Cermaq City Wave at Timberlane Park on Sunday, March 6. The visitors from Campbell River have clinched the division title, resulting in a promotion to Division 1 next season.

“It was a good result for us against the top team in the division,” said Villa head coach Chris McDonough. “We’re happy with that; and it puts us up a bit in the standings.”

Villa moved into seventh position in Division 2, tied with Sooke Loggers and one point ahead of Victoria’s Castaways FC.

Villa holds one game in hand over each club and, with one regular-season game remaining, is safe from relegation to a lower division.

“Our goal was to stay in division two after being promoted from division three last year,” said McDonough. “We’ve accomplished that and hope to improve on it next year.”

Despite still missing several regular rosters players due to injuries and only having two substitute players available on the bench, Villa controlled play to start the game, which lead to a breakaway 30 minutes from kickoff for attacking midfielder Braxton Leask.

“Braxton cut off a pass from one of their defenders and beat the keeper with a nice goal to put us up 1-0,” said McDonough.

Cermaq City picked up the pace after falling behind, but were unable to equalize before halftime. The division leaders poured on further pressure after the break.

“We had a few chances of our own, but they had the better of the second half,” said McDonough.

With 15 minutes remaining in the game, a cross from the right side found the head of Cermaq City’s striker at the far post; the resulting header tied the score 1-1. The teams traded chances before the final whistle and settled for one point each.

The coach praised Leask, goaltender Cory McCracken and the centre-back pairing of Dean Thorsell and Nick van’t Schip for their strong play throughout the contest.

“Braxton played well,” he said, “and Cory made some big stops, especially in the second half to keep us in the game.”

With the season’s second-to-last game in the record books, one contest remains on Villa’s schedule. Saanich’s Prospect Lake Lakers provide the opposition for the season finale 1:30 pm on Sunday, March 13, at Timberlane Park.

“We are looking to call up a few youth players, to get them some experience at this level and take advantage of not-too-high pressure of a situation for them,” said McDonough.

Lakers are currently one point ahead of Cowichan Untied and two points in front of Lakehill United.

“They are in second place fighting for promotion to division one; it should be a big game for them,” said McDonough. “We hope to have a good showing and pick up three points.”