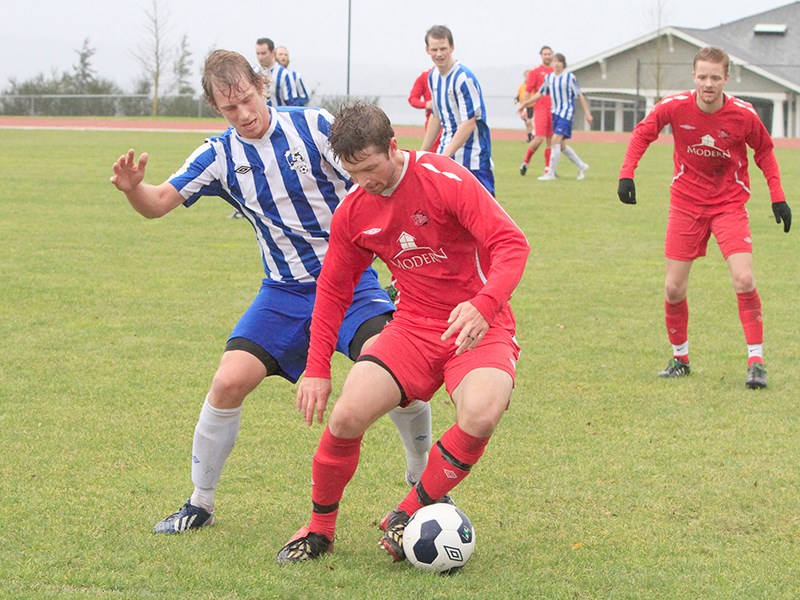 With the 2015/2016 season now complete, Powell River Villa soccer club shifts its focus to the future. After a seventh finish in Vancouver Island Soccer League (VISL) Division 2 standings, one goal set at the start of the season was accomplished.

“Staying in Division 2 was the number one priority and we did that; it was something we talked about at the beginning of the year,” said Villa coach Chris McDonough.

Another goal set by management and players was to place among the top four teams in the division, but circumstances, including player turnover throughout the year and a youthful roster, led to a change in expectations as the season went on.

“We had a lot of young players this year; the core of our team is under 25 years old,” said McDonough. “Our personnel changed a little bit, but we’re happy with how we finished. Seventh is not too bad, but obviously we would like to have placed higher.”

Villa avoided relegation to Division 3 by finishing with a record of three wins, seven losses and six ties within the 10-team division.

“We could have been higher in the standings with some better performances; there were a lot of opportunities missed,” said club president Jamie Zroback. “This is a league where ties kill you; one point for the draw and three for a win, so when you tie a lot of games, it really hurts.”

Filling the roster is always a challenge, with younger players moving away for school and players who join the team while attending college in Powell River only being available for four to five months.

“There was turnover from last year, too; we probably lost 10 players,” said McDonough. “We brought in some new players and some short-term guys from Camber College; we won’t get them back, but hopefully it can be a source of personnel for us moving forward.”

The organization continues to focus on developing younger players through youth teams in Powell River, with hopes that some will become regulars on Villa’s roster in the near future.

“We have a pretty good eye on who is coming up through the system and what players might be able to fit into our team,” said McDonough.

Despite remaining at the same level, Villa’s competition will change by 40 per cent next season, as two teams promoted from Division 3 and two relegated from Division 1 will join Division 2, presenting a challenge for coaching staff and players as they face unfamiliar opponents. A veteran group of experienced players including Dean Thorsell, Kye Taylor, Rob Devlin and Daniel Paul will help in that area.

“Those guys have been with the club a long time, 10 years-plus for most of them,” said McDonough. “Then we have a younger core of guys like Nick Van’t Schip, Matt Liknes and Braxton Leask.”

With the core of the team returning and, according to McDonough, continually improving, Villa’s challenge will be to fill gaps created by departing players with new recruits and retain as deep of a pool of available talent as possible.

When necessary, the club utilizes alumni players now based on Vancouver Island and former players who play for the mid-Island U21 team.

While losing players to Vancouver Island teams is a regular occurrence, the opposite happens on occasion. Rookie Curtis Denniston moved to Powell River from Nanaimo prior to the season; the son of former Powell River Kings and Powell River Regals hockey player Heath Denniston became an important fixture on the roster.

“Curtis was probably one of our top players last year,” said McDonough. “He will be a focal point for our team the next couple of years.”

“We hope to have a few more rookies next year, local guys who can hopefully jump up a level to play with us,” said McDonough.

Looking into the future, McDonough said the club’s on-field, long-term goal is to eventually earn Division 1 status again, while the immediate goal is a top four finish next year. It has been a decade since Villa last played in the top VISL flight.

McDonough added that the team is aiming to challenge for the top of Division 2 next season.

“We had moments and glimpses this year, but consistency from week to week was something we had challenges with; we’re pushing to get better and improve,” he said.

Off the field, recruiting of another sort is at the forefront of planning for the coming season. With financial obligations to the league to meet for each season, the club is always on the lookout for more assistance from an organizational standpoint.

“We can always use help, it’s been the same people every year for the last while,” said Zroback. “We’re going to be looking at bringing more people on
board for next year.”

The field at Timberlane Park continues to be another challenge for the club. An inconsistency of where and when home games are played has directly affected revenue resources.

“Since the track was put in, we haven’t played a full season [at Timberlane],” said Zroback. “The city is figuring out why the grass is not rooting, so it is uncertain if we’re going to be on Timberlane, or back to Cranberry next year.”

The club previously played at Brooks Secondary School for a season and postponed or cancelled several games at Timberlane this and last season due to weather conditions. While wind resulting in ferry cancellations cannot be controlled, having a dependable, regular field to play on is essential. Its current backup field is the former elementary school is Cranberry.

“It’s just having the same option available, because on a Thursday night you’ve already advertised in Wednesday’s paper,” said Zroback. “If Timberlane closes Thursday night and then you move to Cranberry, a lot of people don’t know where the game is; it is not the best scenario.”

The club hopes to have field-related issues sorted out in time for next season.

“The city was great; they made Cranberry available to us,” said Zroback, “but we’re hoping to play the whole season at Timberlane next year.”

After a one-month break, training for players resumes in May. VISL regular season play begins in September.