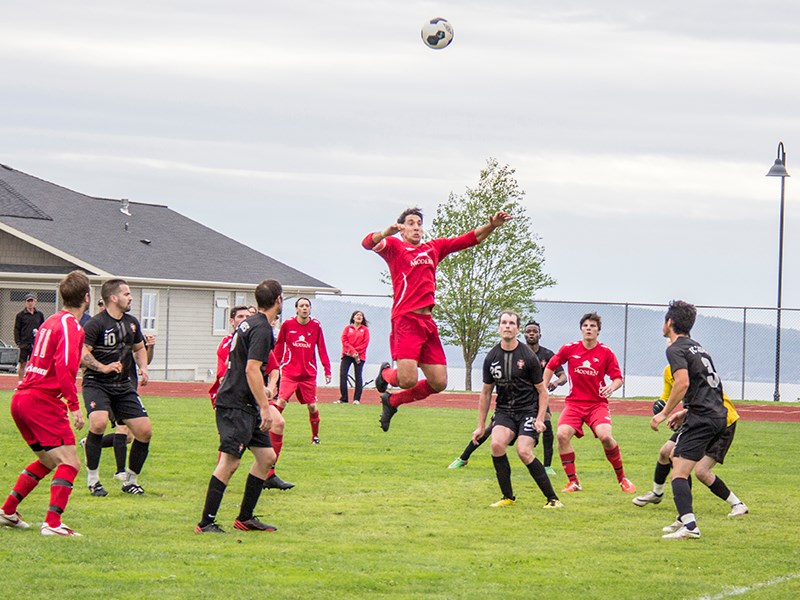 HEADS UP: Powell River Villa team captain Kye Taylor goes for a header on one of his many scoring chances during Villa’s 3-1 win over Victoria’s FC Sagras last weekend. Taylor scored once in the team’s season opener. David Brindle photo

Powell River Villa soccer club accomplished something on Sunday, September 10, that the team did not do much of last year: it won.

Jake Kenmuir scored Villa’s first goal early in the first half off a penalty kick. Team captain Kye Taylor followed it up by breaking in behind Victoria's defence at the midway point of the half and scored what proved to be the winning goal on a low and hard shot into the right corner of the net.

“Kye was battling with their defenders all game long,” said Villa coach Chris McDonough. “He had a great game and was involved in most of the goals and created a few chances. He'll be very important for us going forward and I'm hoping he's top of the league in scoring.”

Taylor has moved up to striker after a number of seasons as a midfielder for Villa.

“For years I played in the midfield and I get pretty banged up in there,” said Taylor. “I'm excited about the new position and will hopefully put some more balls into the net.”

Victoria scored its lone goal right at the end of the first 45 minutes of play. Kurtis Dennison scored the insurance goal for Villa in the second half.

“That third goal was a result of a great attacking play by Daniel Paul who broke down the left side, beat a couple of guys and got a nice cross into Kurtis Dennison, who slotted the ball into the bottom corner,” said McDonough.

Villa was relegated to Division 3A for this season after finishing at the bottom of the Division 2 standings in 2016/17 with a record of one win, 14 losses and three ties. Playing in the lower division will allow the team to carry a bigger roster and give younger and less experienced players more time to develop.

“There's quite a few new faces,” said Taylor. “Jarek Long on the back line had a really good game, Julius Ulrich in the centre-midfield and a few others coming up are promising.”

Villa will play at the highest level possible, despite being in Division 3A, according to McDonough.

“We'll be one of the better teams in third division, so we'll definitely get more wins than last year,” said McDonough.

Approximately 150 fans cheered on the home team and McDonough said it was positive for the team to reward the crowd with some goals and a home win.

“What we're striving for is to play entertaining ball,” he said. “ We want to create chances and be an attacking team.”

Villa’s next game is Saturday, September 16, in Victoria against Bays United FC.