Soccer team travels to Victoria with roster of young talent
Sep 20, 2017 8:00 AM By: David Brindle 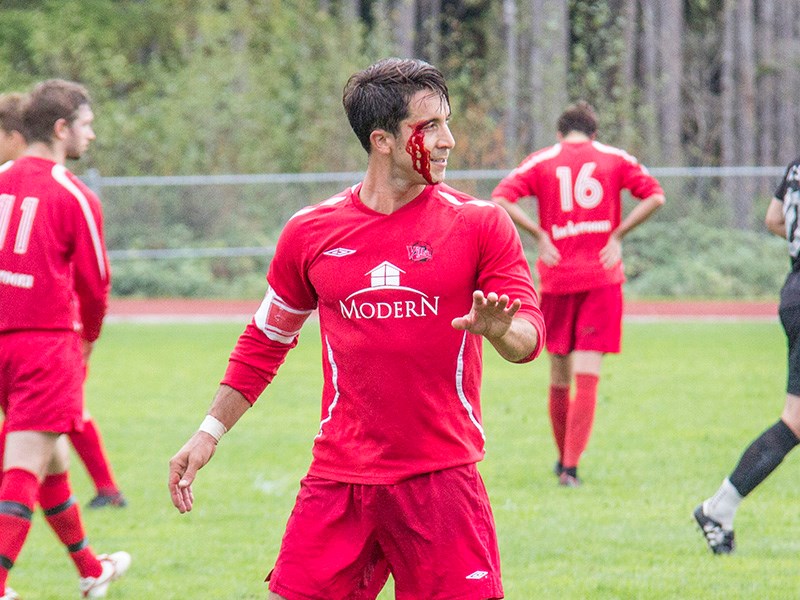 With a 2-0 win over Bays United in Victoria on September 16, Powell River Villa posted its second win and is undefeated to start the Vancouver Island Soccer League (VISL) Division 3A season. Villa defeated FC Sagras to open the season one week earlier.

Villa travelled to Victoria without eight of the players on its roster for the season opener. Head coach Chris McDonough said it was a young team that included three youth players, two 16-year-olds and a 17-year-old, in the lineup on permit.

“Quite a few changes injected a lot of speed and youth into the lineup,” said McDonough. “James Timothy, who trains with Villa regularly, and Cullen Buholzer are both from Vancouver Island Premier League, and goalie Kevin Kissinger is from Victoria’s Lakehill Soccer Association Under 21 team.”

Kissinger was injured with about five minutes left in the first half; McDonough had to replace him with midfielder Kurtis Dennison.

Jake Kenmuir scored both Villa goals in the road win. The midfielder was fouled inside the penalty area and scored on a penalty kick 15 minutes into the first half. The score stayed 1-0 until the final minutes of the game when Kenmuir scored on a breakaway.

McDonough said it was a great road win for Villa. The team defended extremely well against a tough and technically sound Bays United team that put on a lot of pressure in the final 20 minutes, he added.

“The last 15 minutes of the first half we had some breakdowns that led to opportunities for them,” said McDonough. “We fade out in games sometimes, so maybe it's our focus and ironing out those things. We're just two games in and we have a lot of new faces, so we're still gelling as a team.”

Villa captain Kye Taylor was unable to play due to injury suffered against FC Sagras.

“Kye is still a little beat up from that last game,” said McDonough. “He suffered a concussion and had stitches. He has taken the week off and maybe another week depending on how he feels.”

Villa’s next game takes place at 1:30 pm on Sunday, September 24, at Timberlane Park against Gorge Us-Guys. Villa and Gorge are currently tied for first place in Division 3A with six points each.