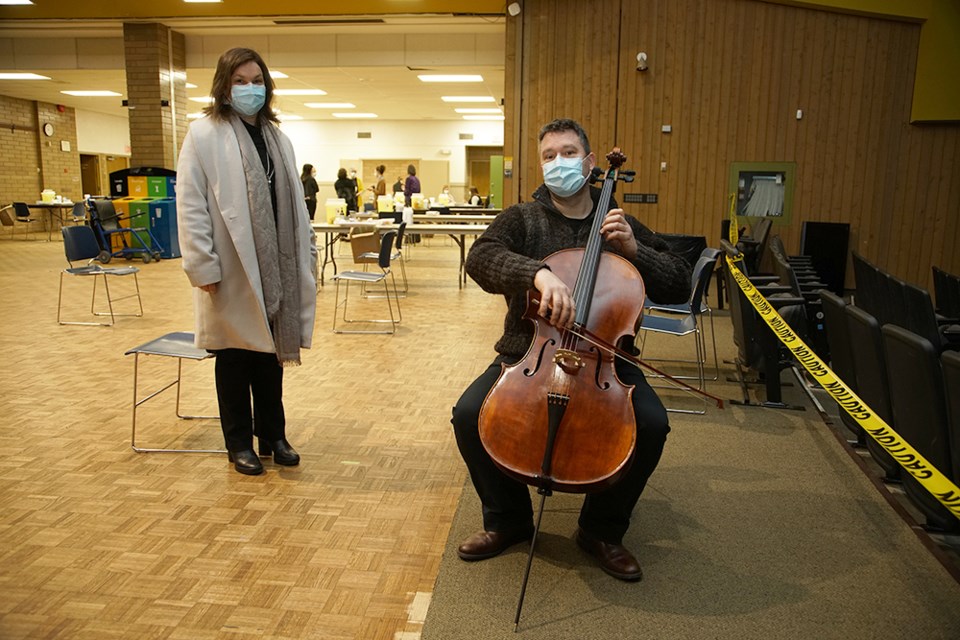 HELPING OUT:  Conductor and cellist Arthur Arnold, with Mélie de Champlain, Vancouver Coastal Health director Powell River community of care, has been playing music for people preparing for their COVID-19 vaccinations at the Powell River Recreation Complex. Arnold appeared before City of Powell River’s committee of the whole indicating that PRISMA’s plans for this summer have been modified due to COVID-19.Paul Galinski photo

At the May 4 City of Powell River committee of the whole meeting, PRISMA artistic director Arthur Arnold said the organizers believe, with the current travel restrictions, that students cannot be invited to Powell River.

“We had planned for and accepted 21 students with the goal to teach them here, but we will teach them through Zoom and other technologies,” said Arnold. “We just feel there is a risk of bringing in 21 students to our isolated community now that there is a third wave.

“I did not expect it and I feel very frustrated about it but this is the only right thing we can do.”

Operations and engagement director Misty Oakes said it’s important to note it was not an easy decision to come to but it’s not a cancellation and PRISMA did not want to be an organization that finds loopholes.

“We want to do the right thing but we also want to continue to bring the arts to the community,” said Oakes. “We just think it is so important to translate all of the emotions that we’re constantly going through. People need to be enlightened and transformed through music. That is our core belief.”

Arnold said he has been playing cello regularly at the vaccination clinic at Powell River Recreation Complex and there is so much positivity.

“People stay longer and they yearn for music,” said Arnold. “It’s wonderful to be able to do that and to bring a little bit of music into our community.”

He said he has also been doing PRISMA for kids and has been in schools and a lot of classes outside. He said he wanted to share with councillors some comments from Kelly Creek Community School kindergarten students. He said they have a classroom in the forest and were sitting on tree stumps, as was he, when he played music for them.

Other comments included: “I was the most calm I have ever been.”

“I was a bit sad and happy at the same time.”

“When I closed my eyes, all I could feel was music.”

Arnold said there were students sitting with their eyes closed and he asked them why and they said they want to be with the music.

He said the teacher wrote she’s always amazed how young children can feel and respond to music.

“This is a little bit of a testimonial how important the music is for all of us,” said Arnold.

Mayor Dave Formosa said he was sure that the chief financial officer could bring councillors a report.

“We have to keep it (PRISMA) alive, otherwise we might lose it,” said Formosa.