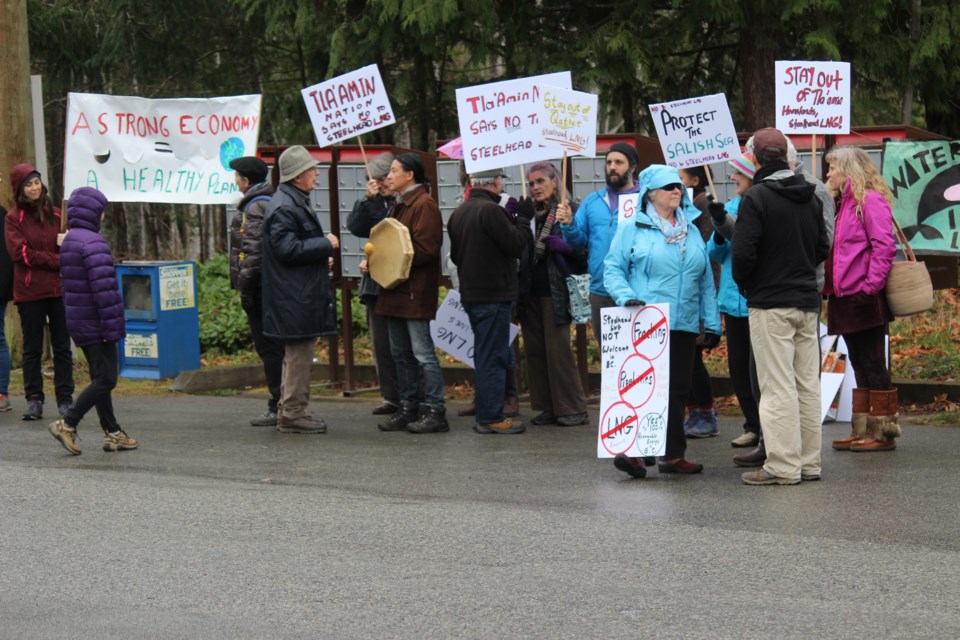 PIPELINE PROTEST: Steelhead LNG and Huu-ay-aht representatives were at Tla’amin Nation government house for a presentation on a proposed pipeline. David Brindle photo

Steelhead and Huu-ay-aht are co-managers of a proposed Kwispaa LNG export facility on the west coast of Vancouver Island. One proposed pipeline route would begin from Chetwynd to Williams Lake area, through the Coastal Mountains, southwest to Powell River and 31 kilometres subsea across the Strait of Georgia. It would end at the Kwispaa LNG floating export facility on Huu-ay-aht land at Sarita Bay, at the southern end of Alberni Inlet, 42 kilometres southwest of Port Alberni.

The protestors, a group of Tla’amin citizens and people from Powell River, are opposed to the pipeline going through Tla’amin traditional territory and criticize the lack of transparency by leadership over discussions with Steelhead.

“They've kept us in the dark,” said protestor and Tla’amin citizen Koosen Pielle. “I think that is where most of the outrage is coming from. How can you have been talking to these people for so long and we now just know about it?”

Tla’amin hegus Clint Williams said leadership has been open about any communication with Steelhead.

Williams said there was a general assembly for community members last summer and Huu-ay-aht was invited to come and introduce the project.

“They showed up and just had a talk with our community, why they're interested in this Kwispaa LNG project, and they just wanted to introduce it to our people,” said Williams.

During that visit, Pielle said representatives of the Kwispaa project got a 15-minute platform to explain the project.

“But everybody was dumbfounded and caught off guard that they were even there and they kind of just let them in with a different meeting,” said Pielle. “Nobody knew how to handle it.”

She added that Thursday’s information session was the first time a meeting was held specifically to inform the community.

Williams said he was frustrated that the protestors outnumbered Tla’amin citizens who were put off attending the meeting that was intended as an opportunity for Steelhead and Huu-ay-aht to meet with Tla’amin before engaging the broader community in the Powell River region.

Pielle said the protestors did not disrupt the meeting and were invited inside government house. She said Williams should take responsibility for the low attendance by community members because there was a lack of communication between leadership and the community.

Williams said the only way Tla’amin would participate in a gas line coming through the nation’s territory would be through referendum.

According to Steelhead communications manager Matt Skinner, the company and Huu-ay-aht initiated early engagement last year with indigenous groups to introduce the project along the conceptual corridor for pipeline on a nation to nation basis.

“Steelhead LNG will continue to engage with Tla’amin Nation leadership and citizens to build relationships and are committed to ongoing and meaningful consultation,” said Skinner.