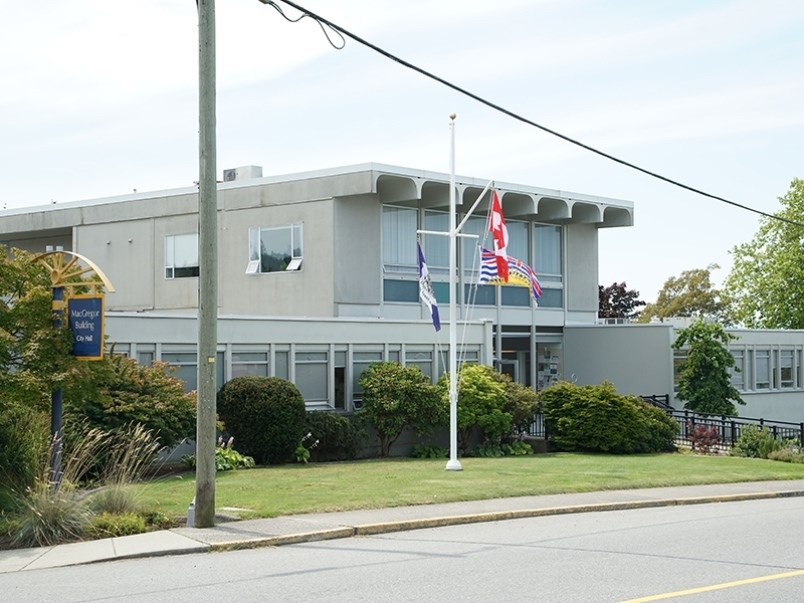 Townsite Ratepayers Society outlined concerns about the prospect of a proposed composting facility for their neighbourhood during a recent meeting at Powell River City Hall.Peak archive photo

Townsite Ratepayers Society has expressed concern about the prospect of the proposed composting facility on the waterfront lands of Townsite.

At the February 16 City of Powell River committee of the whole meeting, councillors heard from ratepayers society president Diana Collicutt and past president Stephen Miller with regard to the project.

Miller said they were speaking about the recent composting announcement by the provincial government, where it was outlined that a grant had been given to build and operate a composting facility on the waterfront lands of Townsite. On January 14, the ministry of environment and climate change strategy announced that Tla’amin Nation would build a $1.15 million facility on land adjacent to the Catalyst mill site in Townsite, with two-thirds funding from a federal-provincial grant.

Miller said to be 100 per cent clear, the society is adamantly opposed to a composting facility in Townsite on lands in the middle of their neighbourhood and very near to their residences.

Collicutt said the Townsite neighbourhood and commercial area are located within one kilometre of the proposed compost facility. She said when she and her husband moved here in the early 1990s, Townsite was a “rundown neighbourhood.”

“The kraft mill and the mill’s primary clarifier were in operation, polluting the air and creating terrible offensive odours,” said Collicutt. “Residential properties were not selling, the commercial core was empty and businesses had deserted the neighbourhood. Investment in the community was virtually nil.

“Fast-forward to the present and Townsite is now a thriving residential and commercial neighbourhood that supports and contributes to the outside appeal of the entire Powell River region.”

Collicutt said there is talk of a compost facility on the waterfront lands in the residential neighbourhood. She asked if any councillors have researched the negative health impacts this facility might cause. She outlined information from the Canadian National Collaborating Centre for Environmental Health, January 2018, regarding harmful effects of the composting process.

“A compost facility constructed on the Townsite waterfront has the very real potential to set us back to the situation of the ’80s and ’90s; a situation that could decrease property sales and assessments and jeopardize the economic viability of the residential and commercial sectors of the community,” said Collicutt. “Imagine tourists participating on a guided walking tour, or sitting outside at one of the restaurants, with bad odours fanning from the compost facility? Do you think they will come back?

“Decision makers need to be aware, if the economic prosperity of Townsite begins to fail because odour is a problem, the negative impacts will not only affect Townsite, but they will spill over across the entire region. Because odour may be the landmark feature of Powell River’s waterfront compost facility, along with potential odour emanating from the five acre-plus sewage plant a short distance away, this may become the prevalent characteristic, not only of Townsite, but our so-called Coastal by Nature community.

Miller said at some point around 2017, a series of events took place that did not involve taxpayer consultation. He said the old mill lands were split up and the city chose to place a consolidated liquid waste plant on 20 acres. He added that Tla’amin ended up with 3.5 acres, most likely eliminating any authority the city would have over use of the land, where the proposed composting facility is to be located.

“If the city really cares about Townsite and doesn’t consider it the dumping ground for all dirty industry, then they could take a proactive stance in protecting our neighbourhood and our investments,” said Miller.

Councillor George Doubt suggested the ratepayers make a similar presentation to qathet Regional District (qRD) also, because it has put out a request for proposals for a composting facility so organics can be composted locally. He said a lot of people are calling for the city’s organics pilot project to be expanded and it makes more sense to process the organics locally than transport the materials for composting outside of the regional district. He said qRD will be reviewing those requests for proposals over the next little while.

Doubt said the ratepayers had seen a news article about the Tla’amin processing facility, and be that as it is, he doesn’t know anything about what the Tla’amin proposal is for a composting facility. He said he’s sure it will be coming to the regional district for discussion.

“I take your concerns seriously,” said Doubt. “Obviously, when a composting facility is talked about for anywhere, odour is the first item that comes up. I’m sure that will be taken into account when the regional district reviews it.”

Miller said the Townsite ratepayers are not opposed to a compost facility, but they are opposed to a facility close to their homes.

Councillor Rob Southcott said he appreciates the comments of Formosa and Doubt, which infer jurisdiction. He wondered if staff could speak to the matter of jurisdiction as far as Tla’amin lands in Townsite go.

Chief administrative officer Russell Brewer said the lands were Tla’amin-owned within the city’s jurisdiction currently, but the intention is for them to become treaty settlement lands at some point. He said Tla’amin is working on the matter with the province.