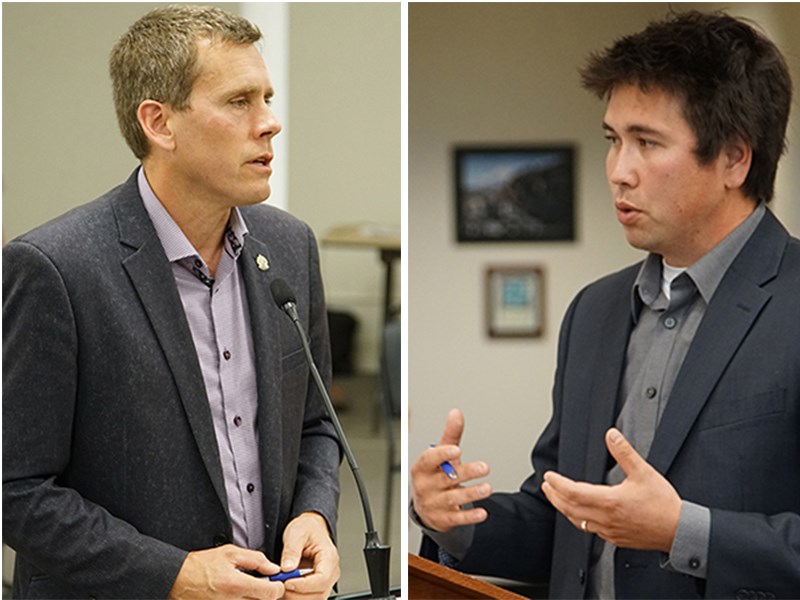 Two City of Powell River administrators faced an extensive list of questions while appearing at a meeting of the Westview Ratepayers Society.

Chief administrative officer Russell Brewer and chief financial officer Adam Langenmaier spent nearly an hour and a half fielding questions from the ratepayers, on topics such as property assessment and taxes, residential tax rates, the approval process for major expenditures, new services and costs to ratepayers, the consolidated wastewater treatment plant, plus economic development issues.

At the January 14 online ratepayers meeting, the first question asked was about the relationship between the increase in assessed value of a property and property tax.

He said when he builds a five-year plan, he does not take into consideration the changes in assessed values because he doesn’t have any control over that factor.

“What control the city has is the tax rate that is charged on the assessed value,” said Langenmaier. “When we saw big increases in assessments in 2018, in the 20 per cent range, we didn’t see property taxes go up by 20 per cent. If your home changed by that average amount, you’d have a property tax change near the five per cent range.

“What I do factor in is the overall tax increase year over year in the five-year plan. The city forecasts the cost of operations and over the next five years I factor in what we are going to need to do for increases to balance the budget.”

“Forecasting the expected tax change on a single-family dwelling, I like to keep it at five per cent or less as the target goal,” said Langenmaier. “I don’t want to have tax years where you have an eight per cent increase, and the following year, one per cent. Consistency helps.”

Another question stated that long-term debt discussed at a finance committee meeting last November indicates that Powell River ranks 124 of 162 BC communities with a per capita debt of $946 per person. It is forecast that by December 31, 2022, Powell River will rank 150 of 162 communities with an accumulated debt of $2,193 per person. The ratepayers wanted to know if there was a limit to the amount of debt the city can take on, and whether it had evaluated the impact on residential taxpayers if the Paper Excellence/Catalyst mill no longer pays its taxes.

Langenmaier said Powell River will have a higher debt per person than other communities. He said this is in part because the city owns and operates the water system, sewer system, marinas and Powell River Recreation Complex. He said in many other communities, these systems are shared and the cities don’t own them because they are owned and operated by regional districts. He said the debts in these instances would not show up in the city’s books.

Langenmaier said there is a limit to how much debt can be taken on. The current theoretical maximum debt that could be taken on by the city at current interest rates and maximum (30-year) amortization is $114 million more in debt, according to Langenmaier. He said this amount already includes the authorized $27 million loan for the wastewater treatment plant.

The ratepayers wanted to know about layoffs of city workers since the onset of COVID-19. Brewer said none of the full-time staff have been laid off. He said a number of part-time staff at the recreation complex were affected.

“There’s still lots of work for the full-time workers to do,” said Brewer. “There was reduced programming, of course, but there was still some programming being offered. There was lots of required maintenance and this was an opportunity to get on top of some maintenance that needed to be done. Where there was a need to move folks around, they were redeployed.”

There was a question about the forecast increase in property taxes to pay for the wastewater treatment plant. Langenmaier said the total change for an average home will be $159.26 over 2020 taxation levels and the loan will be amortized over 30 years.

A question was then asked about the cost of automated curbside collection of garbage. Langenmaier said the change is expected to be cost neutral. Currently, a house pays $79 for garbage services, he said, bringing in about $450,000 a year to the city. The $2 garbage tags bring in about $185,000 per year. With the automated system, the idea is to remove the tags because there is no longer going to be a person looking at the bags to verify if there is a tag.

Langenmaier said to bring in the same amount of money expected to be needed to operate the garbage system, the tag revenue would have to be recovered. This means a house would be paying $110 per year rather than $79 a year, but there would be no garbage tags.

Langenmaier said comparatively, Campbell River garbage fees are set to be $223 in 2021.

Readers interested in seeing the full set of questions, with written responses from the city, can email Westview Ratepayers Society president Ron Woznow at wrppr2020@gmail.com for the list.