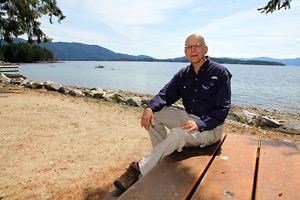 Powell River resident Ron Woznow, who has owned property on Hardy Island since 1995, said the islanders’ links for schools, medical attention and shopping are all in Powell River. Travel to the Lower Sunshine Coast for these services and amenities is impractical given current transportation links and the expense.

In 1995, when he bought into a development on Hardy Island, Woznow became part of a group of 16 landowners who owned 850 acres on the island. Woznow became the project manager for the Blind Bay area’s property development. Woznow said during that process, people in the ownership group were asking why they were part of the SCRD rather than the PRRD. For example, the contractors were working on the project were all from Powell River.

Woznow said residents on Nelson Island, adjacent to Hardy Island, feel similarly about their inclusion in the SCRD.

In light of the pervasive opinion on both islands, Woznow spoke with PRRD Chair Patrick Brabazon, and Al Radke, chief administrative officer.

“I asked them what they thought,” Woznow said. “Patrick very appropriately said ‘before you date us, you have to have a separation from down south.’”

Additionally, Woznow has had “long conversations” with the provincial ministry responsible and they agreed that Brabazon and Radke were pointing the islanders in the right direction.

“The first step in the process is to get the SCRD to agree to initiate a process,” Woznow said.

The provincial officials advised it would be a long process, involving consultations, and ensuring the majority of Hardy Island residents are onside. The two regional districts also have to be in agreement.

Woznow said that if somebody on Hardy Island wanted to run for a seat on the SCRD board of directors, the logistics of attending meetings would be onerous.

“There’s no way that you can really be involved in your own governance,” he said. It’s much simpler to take a short boat ride to the Powell River region, whether it be to Saltery Bay or other docking points, and drive to the regional district office, he said. “Our natural linkages are with Powell River.”

It is a common sense initiative and that is exactly the way that Woznow has positioned the issue with Gary Nohr, chair of the SCRD.

Woznow guessed there are 10 full-time residents on the island. He said there are probably 80 or 90 lots, so there is a larger seasonal population. He believes the majority of Hardy Island residents are onboard with the transition.

Woznow wrote a letter pertaining to secession from the SCRD that was discussed at the corporate and administrative services committee on June 25.

The letter, in part, said Woznow was writing to initiate discussion on the process that would move Hardy Island from the SCRD to PRRD.

“As mentioned, Patrick Brabazon, your counterpart at the PRRD, and Hope Preston, in the local government division of the ministry of community, sport and culture, concur that discussions should start with you,” Woznow stated in the letter. “As a landowner on Hardy Island since 1995, I have heard from many different parties that since the owners of property and the residents of Hardy almost exclusively use community services provided for or in the PRRD, it would make sense that Hardy fall within the PRRD.”

Woznow said he understands the process normally takes about three years if it was to come to fruition. He informed Nohr he would like to meet with him to begin the process.

The SCRD corporate and administrative services committee recommended that the correspondence Woznow sent be received.

Brabazon said Hardy Islanders approached this regional district with regard to whether the PRRD would be willing to accept them as part of this community.

“The answer was: you have to go away and talk to the Sunshine Coast Regional District and when you’ve completed discussions with them, and you still want to do it, and they want you to go, then we’ll talk,” Brabazon said.