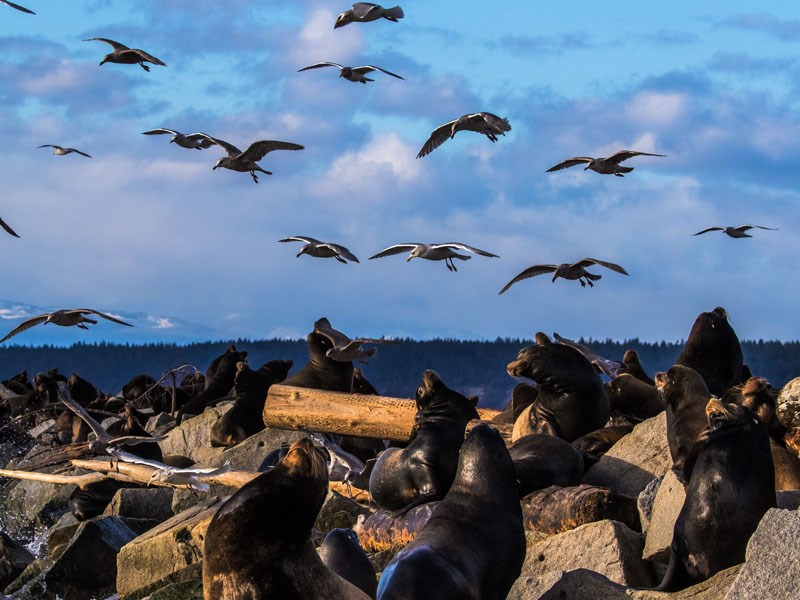 Powell River residents are enthralled by the arrival of hundreds of sea lions that have taken up temporary residence at Second Beach near Catalyst Paper Corporation’s mill.

According to UBC professor and director of marine mammal research unit Andrew Trites, these are adult male sea lions from California. Only the males come here in the fall and winter.

Since their sudden arrival, the sea lions are definitely leaving an impression on Powell River.

“When they arrive it's something like the biker gang that's just shown up for its annual convention and there is no advance warning,” said Trites. “They just show up.”

“I wonder at times if they don't bark in their sleep,” said Trites.

The constant barking might be annoying to some residents of Townsite, the neighbourhood above where the animals have made their flophouse, but their presence in Powell River is a sign, according to Trites, that there is a healthy ecosystem supporting large numbers of marine mammals.

Their presence is a sign that the waters near Powell River have something quite abundant for the sea lions to be drawn here, he added.

“There's something good for them to be eating and if you are a sea lion, there is nothing better to eat than herring,” said Trites, “so there's probably a good herring population there.”

That is a very possible hypothesis, according to Fisheries and Oceans Canada regional herring officer and lead special use herring resource manager Victoria Postlethwaite.

“There are reports of the herring arriving,” said Postlethwaite. “The season is starting shortly. We usually see the largest abundances by the end of February.”

According to Trites, anchovies have also been reported to be in the Salish Sea, which sea lions feed on.

Trites said in many places around the world a person would have to spend a lot of money to get near a sea lion, such as travelling to see a related species in the Galapagos Islands, California or Mexico.

“Just think, they're right there on your doorstep in Powell River and it's not costing you a penny to have that wildlife experience,” said Trite.

Once these male sea lions become big and buff, they will head back to California.

“They are going to leave and they will go back south,” he added. “You just don't know when.”

Trite said sea lions are polygamous breeders, which means one male is going to defend a territory and mate with as many females as he can entice to stay within his territory.