Soccer club wins big but loses important player due to injury
Oct 25, 2017 8:00 AM By: David Brindle 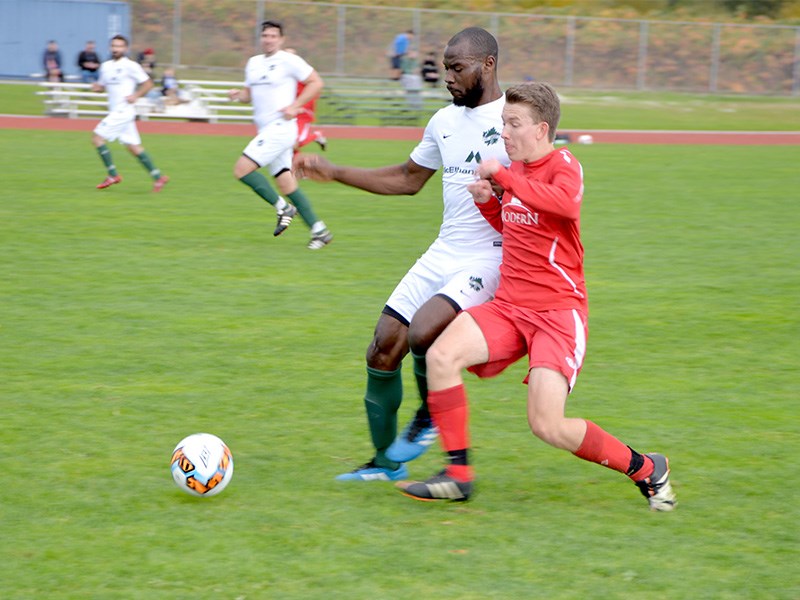 Near the end of the first half, Taylor went up for a header at about the seven-yard line and collided with Victoria’s goalkeeper. Everyone at Timberlane Park, including players from both teams and spectators, heard the result.

“It was really ugly,” said Villa head coach Chris McDonough. “I could hear their heads hit from the sidelines.”

McDonough would not speculate when or if Taylor will return to the lineup.

In Villa’s season opener against FC Sagras on September 10, Taylor sustained a head injury in an almost identical manner. He jumped up to challenge for a header, collided with the opposing goalkeeper and missed Villa’s next two games.

Losing its star striker will affect Villa’s offensive power. With four goals on the season, Taylor was tied for fourth in division scoring. Against Victoria, he scored three times before leaving the game; his hat-trick came off the header that caused the injury.

Nick Van’t Schip scored two of Villa’s six goals and Julius Ulrich scored the most impressive goal of the year after playing keep-away with the opponents, according to McDonough.

“He eluded the goalie and the defender and they were chasing him around,” said McDonough. “It was entertaining.”

Taylor was named Villa’s most valuable player for the game.

Villa has scored 19 goals in its last three games, while allowing its opposition only three. With 25 goals for and only six against on the season, the team has the highest goal differential, 19, in its division.

McDonough said scoring is coming from all over his lineup.

“Our player personnel has been really strong the last few weeks; we've had a really good team to pick from,” he said. “There are lots of options and guys are scoring. We’re not having trouble putting goals in right now.”

Villa sits in third place with five wins, one loss and one tie for 16 points, two back of both Gorge and Bays United.

Villa travels to Victoria on Saturday, October 28, for a rematch against FC Sagras. The next home game takes place Sunday, November 5, at Timberlane Park against Bays United. Game time is 1:30 pm.