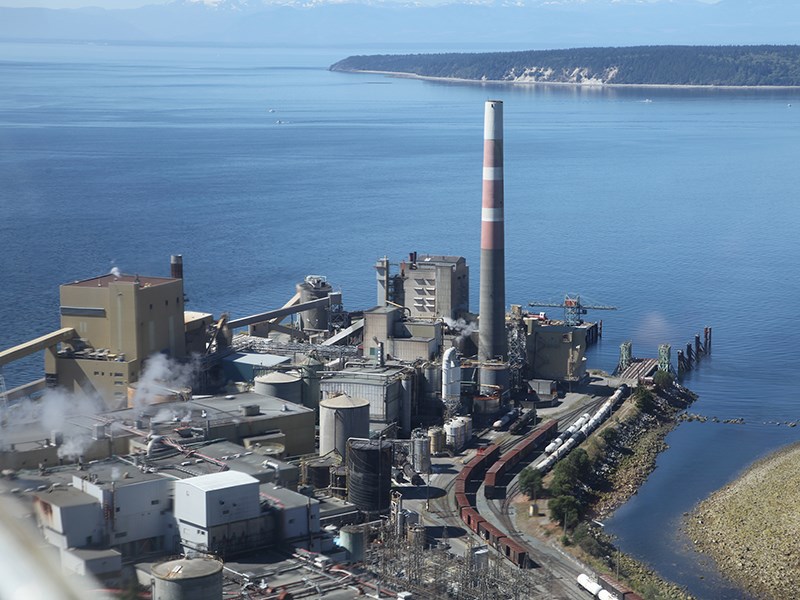 City of Powell River’s committee of the whole has decided not to take any action on correspondence regarding its revitalization tax exemption program with the Paper Excellence/Catalyst paper mill.

At the December 15 committee of the whole meeting, councillors reviewed correspondence from resident George Orchiston, who stated that the revitalization tax exemption with the mill is not in compliance with the Community Charterand is invalid.

According to the city’s revitalization tax exemption bylaw, the city does not charge the fully assessed property tax amount to the mill. The current bylaw, signed October 30, 2020, provides for an annual tax bill of $3.2 million for a three-year period, waiving $8.4 million in taxes over the term of the bylaw.

Mayor Dave Formosa said the matter had been dealt with on a number of occasions. He added that legal opinions had been sought on the same question, resulting in the same answer.

“This letter has a little bit of a different twist to it,” said Formosa. He said the letter’s assertion was that the city had given Catalyst a revitalization tax exemption beyond its powers over a three-year term.

“We went and asked our lawyers twice and they came back and said the city has done this correctly, having worked with the chief administrative officer,” said Formosa.

He said Orchiston’s letter asks what the city got in return for granting a revitalization tax exemption.

“It says Port Alberni got $13 million worth of investment and what did you get?” said Formosa. “I think that’s what part of this correspondence is referring to. My answer to that is I did call the president of Catalyst and had a chat with him.”

Formosa reported later in the meeting during his community engagement report that in his conversation with vice president of paper and packaging at Paper Excellence Patrick Corriveau, the company remains committed to Powell River.

The committee voted to note and file Orchiston’s correspondence.

Orchiston, in his letter, stated in the years from January 1, 2011, to December 31, 2020, the city has granted Catalyst cumulative property tax relief in the amount of more than $20 million.

“I note that after the provision of all the property revitalization tax exemptions, it is the Powell River paper mill which remains idle, while the mills in Port Alberni and Crofton are in operation,” stated Orchiston. “Clearly, the city’s utilization of the revitalization tax exemption program provisions of the Community Charterhave not resulted in a favourable outcome.

“The taxpayer is sensitive to the positive economic role the local paper mill has played in our community and I would support addressing, on a more permanent basis, a reduction of the mill’s municipal property tax. Over the past 10 years the city has demonstrated that it can balance its budgets while at the same time significantly reducing the mill’s annual property tax bill.”

According to a provincial document called Revitalization Tax Exemptions: A Primer, on the provisions in the Community Charter, dated January 2008, Section 226 of the Community Charterprovides authority to exempt property from municipal property value taxes. According to the primer, revitalization tax exemptions are a tool municipal councils may use to encourage various types of revitalization to achieve a wide range of environmental, economic or social objectives.

The city’s revitalization tax exemption bylaw specifies that council’s objective for the tax program in the major industry area is to support investment and revitalization of an industry to secure the future economic and social health of the city. It also states that council is of the opinion that the revitalization tax exemption program will stimulate the rejuvenation of the major industry area and thus achieve council’s objectives to promote economic activity and employment in the city. The specifics of how this might be done are not outlined in the bylaw.

Orchiston, after the meeting, said the Community Charterprovides that council has the authority to provide a revitalization tax exemption to a property (land and improvements) for the purpose of encouraging revitalization/future positive change.

“On December 4, I wrote to city council and asserted that the granting of a property tax exemption to Catalyst Paper under Revitalization Tax Exemption Program Bylaw 2631 was not in compliance with the Community Charterin that neither the bylaw nor the public notice provided the public with any information as to the nature of any revitalization Catalyst was prepared to undertake to secure employment at the mill,” said Orchiston. “My letter was included on the agenda of the December 15 committee of the whole meeting. Given the seriousness of my assertion and the $8.4 million in waived property tax by the city, I am extremely disappointed that not a single councillor nor staff member wished to discuss this critical subject at the meeting in an open and transparent manner.

“No member of city council or staff was prepared to point to any revitalization planned or committed to by Catalyst and identified within the bylaw and agreement. Council simply resolved to file my letter along with the noisy rooster letters.”

“Neither the mayor’s nor Corriveau’s comments, however, pointed to any provision in the revitalization tax exemption bylaw or the agreement with Catalyst describing any revitalization that the company is to carry out at the Powell River mill,” said Orchiston. “There is no agreed to quid pro quo here; the city simply agreed to provide Catalyst Paper an $8.4 million property tax break for nothing.”

Orchiston said one has to seriously question any intention on behalf of Catalyst to restart the paper machines at Powell River as some employees have made it known they have been offered jobs at other Catalyst operations. He added that on November 28, the Catalyst mill at Crofton announced the restart of its number three paper machine, creating 58 jobs, while on December 10, a $13 million investment at Port Alberni was announced.

“I continue to assert that the city’s Revitalization Tax Exemption Bylaw 2631, 2020 is invalid for the reasons stated in my December 4 letter,” said Orchiston, “and that when the 2021 property tax year arrives, the city will be providing financial assistance to Catalyst Paper in violation of Section 25 (1) Assistance to Business, of the Community Charter.”