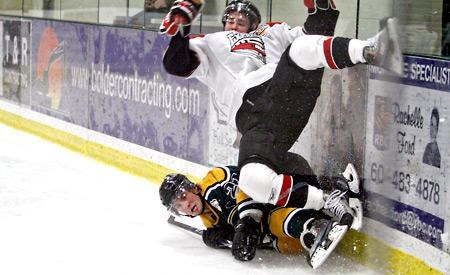 Powell River Kings overcame a collective bout of the flu last week to beat the Alberni Valley Bulldogs 4-2 on Tuesday and Coquitlam Express 5-2 on Friday.

Powell River residents also suffered from the seasonal virus but circumstances such as shared water bottles, the close quarters of a dressing room and a bus made recovery from a bug bite much more difficult for the Kings.

“You isolate people when this happens,” explained Kings’ doctor Steyn Naude, “but it is more difficult with a team and it becomes a little bit of a good luck-bad luck situation. If you have the stomach bug you get dehydrated and fatigued, and it takes a lot of guts—no pun intended—to play when you feel ill.”

Four players were too sick to play against the Bulldogs on Tuesday and at least that many were feeling the effects of the virus but gave it their all.

To add to the Kings’ infirmary woes, on Tuesday Justin Dasilva was unavailable to play as he sat out the first of a two-game suspension imposed after an illegal hit in the game against Langley

The short-staffed Kings called up affiliate player Brandan Smith from the Victoria Cougars to fill the gap and he, along with the rest of the Kings, pulled out a big win against the Dogs.

December’s player of the month, Teagan Waugh, led the Kings with a pair of goals and Brenden Forbes and Mike Sones added singles in the 4-2 win.

“I felt good in the offensive zone,” said Waugh who, after struggling earlier in the year, has found his touch around the net. “I felt like I had more time than I usually do in games so I’m trying to make the most of it.”

Considerably healthier on Friday night, the Kings had more jump against the Express and exhibited what just might be the key to their success year.

Five different scorers from three lines contributed to the win with Waugh, Andrew Pettitt, Chad Niddery, Carter Shinkaruk and Cohen Adair all chipping in with a goal.

If the Kings have struggled at all this year, it’s against the weaker teams but coach Kent Lewis said later, “Sometimes you’ve just got to punch your ticket and go out and do little things well. We know what we need to do and when we did that tonight we got goals.”

The players get that message but sometimes it’s lost between the dressing room and the ice.

“We don’t take anyone lightly,” said defenceman Chris Williams, “but we have to play our game and we didn’t play it tonight. You can tell by the first three shifts how the game is going to go and it is tough to turn it around. We understand we didn’t play a good first period, and we could have played a better second and third, but it’s something we’ll correct in practice this week.”

Other teams should be so lucky as to lament a 5-2 win while outshooting their opponent by a wide 44-16 shot margin but that is the high standard the Kings set for themselves.

Kings host Surrey Eagles at 7:30 pm on Friday, January 14 and then make a quick trip to Victoria on Saturday, January 15 to play the Grizzlies.

Excessive cost and lack of support has forced the league to cancel the All Star game normally held at this time of year. Michael Garteig, probably one of the Kings who would have played in that game, has committed to Quinnipiac University for 2011-12.