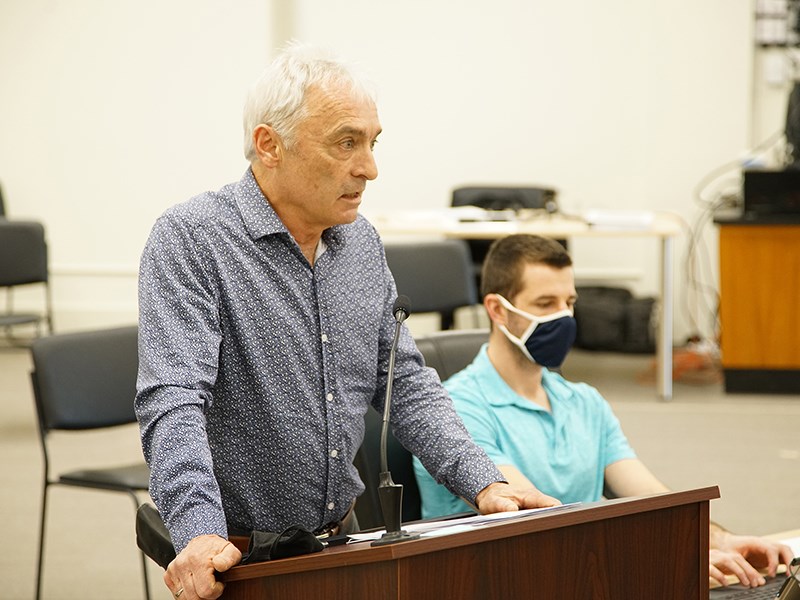 PROVIDES UPDATE: City director of infrastructure Tor Birtig provided a detailed report to the city’s finance committee of progress being made on the consolidated wastewater treatment plant. Paul Galinski photo

City of Powell River’s finance committee was given an update on the consolidated wastewater treatment plant at its February 25 meeting.

Director of infrastructure Tor Birtig said as the committee is well aware, the city was successful in its grant application for the plant.

“Our submission of $76 million was accepted,” said Birtig. “With respect to where we stand, to date, the estimated budget for our pieces of equipment was just over $11 million and those pieces came in at just over $10.6 million, so it was more than $400,000 under the estimated cost.

“We have also committed on this project more than $7.3 million, and that includes two oversight contracts, with Associated Engineering, as well as Colliers International.”

Birtig said the major construction tenders component of the treatment plant closes in the middle of March. He said at that point he would be better positioned to provide a more firm financial situation. Construction on the plant itself is anticipated to begin this spring, ending in early 2023, according to Birtig.

Conveyancing tenders will be issued in April, which is another large component of this project. This is for piping required for the project. Birtig said construction is slated to start this summer and end in the summer of 2022.

He said to date, two main construction contracts have been awarded. One is for clearing and grubbing of the site. That, for the most part, has been complete, according to Birtig. Some work has to be completed in March after heavy rains abate, he added. That contract is coming in under budget.

With respect to the outfall construction, it is behind schedule, said Birtig. The land portion of the work has been ongoing but the marine portion has been delayed. The city has just received a decision by Fisheries and Oceans Canada (FOC) with respect to the city being able to work under what’s called a letter of advice. The city can no longer follow the letter of advice and has to go through a full authorization through FOC, according to Birtig.

“That process would likely take more than six months,” said Birtig. “That is going to delay construction of the outfall, given that the next fisheries window happens between December of 2021 and February of 2022. We are currently working on the contractual impacts of this delay.”

Birtig said some of the other items the city has confronted is the conveyancing work. The city has had to revise alignment of it to avoid an archaeological site. Birtig said that will add some construction as well as engineering costs, estimated at an additional $500,000.

It means the city has more work to do on directional drilling, involving larger equipment and a larger project to avoid the site, said Birtig. The area of concern is located around the Willingdon Beach campground.

The city also undertook some extra geotechnical and site investigation, and there were some extra design and investigation costs, which will result in savings for extra cost during construction, according to Birtig.

Payment for contractors is reviewed and approved by Associated Engineering, said Birtig. There are design and construction oversight consultants reviewing payments to Associated for its oversight, which is reviewed by Colliers International.

Birtig said Colliers are project management consultants. After that, payments are reviewed and approved by city staff in engineering and finance departments. All expenditures are regularly reported to the province and subject to auditing by the provincial and federal governments.

The detailed design for the plant has been reviewed by a third party, said Birtig. The review concluded the design was robust and only required some minor changes.

A risk registry was also created. The eelgrass issue, the risk of COVID-19 onsite and the performance risk of the general contractor were ranked high in the matrix.

To mitigate performance risk, the city went through a prequalification process for general contractor bids. Bids received from seven interested parties were all highly qualified contractors experienced in similar projects, said Birtig. Seven were shortlisted to three and they have committed to provide their most qualified personnel to the project, he added.

Birtig said this project is advertised to local contractors, trades and suppliers, and the city has liaised with subcontractors and suppliers interested in bidding on the project.

Councillor Cindy Elliott said it appears in terms of the costs, the city is under on equipment and over on the site. She asked if the over/under is not in the city’s favour.

Birtig said the city was pretty much on its estimated value to date, but the major component is going to come with bids from the general contractors in March.

Birtig said it appears it does not but that is where the city is reviewing contractual obligations of having two contractors onsite.

“Our preference was to have the outfall contractor come in and complete the job, remove themselves from the site and then the general contractor for the consolidated site would come in following that,” said Birtig. “In this case, we could have two contractors on site. We just have to define it in the contract.”

Doubt said where there is the estimated extra $500,000 to revise the conveyancing, there is a contingency built into the budget. Birtig replied that was the case.

The finance committee voted to accept the report.