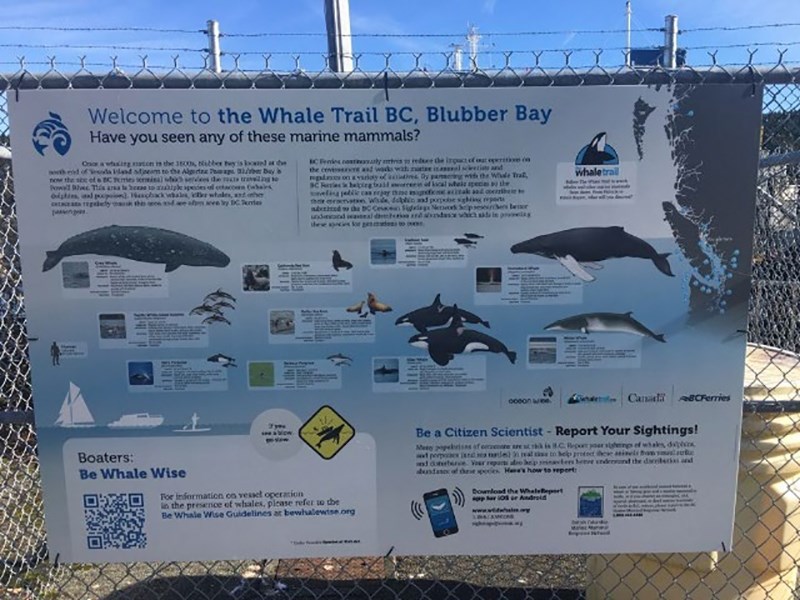 Blubber Bay terminal on Texada Island is one of the latest additions to BC’s Whale Trail.

BC Ferries made the announcement on February 19, two days before World Whale Day.

“Expanding the Whale Trail BC is another way to embrace conservation, research and environmental stewardship,” stated Corrine Storey, BC Ferries’ vice president and chief operating officer. “We support initiatives that foster awareness and appreciation for the marine life in our coastal waters.”

In partnership with the Whale Trail, Fisheries and Oceans Canada and Ocean Wise, BC Ferries installed interpretive signs at Blubber Bay and Campbell River terminal.

While viewing the new terminal signage, BC Ferries is reminding customers that wearing non-medical masks or face coverings is a requirement at terminals and while on board ferries.

BC Ferries joined Whale Trail BC, a series of shore-based sites to view marine mammals along the Pacific Coast, in 2020. Three initial locations are at Tsawwassen terminal in Metro Vancouver, Little River terminal in Comox and Langdale terminal on the Sunshine Coast.

The Whale Trail is a Seattle-based non-profit organization with a mission to inspire appreciation and stewardship of orcas, other marine mammals and the marine environment, according to a media release.

In 2015, BC Cetacean Sightings Network (BCCSN) – a citizen science program at Ocean Wise that collects whale, dolphin and porpoise sightings from coastal citizens to aid in conservation – partnered with the Whale Trail to expand the network of land-based whale watching sites into BC.

BC Ferries’ vessels have been regularly reporting sightings to BCCSN since 1975.