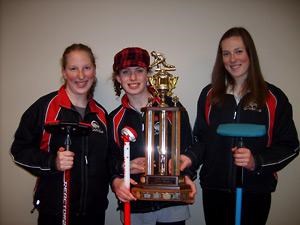 Brooks Secondary School girls’ curling team will be heading to provincials after winning the Vancouver Island finals, despite being down a player.

Playing in Mill Bay over the weekend the girls beat the only other team to enter in the first two games of a best-of-three final. Krista Cawley, skip, Michaela Douglas, third, and Erica Cawley, lead, beat the other team 11-1 and 8-3 and will be heading to Richmond on March 11 for the provincials.

A boys’ team from Brooks also competed but missed the finals by one game. Kyle Gareau, skip, Jason Smith, third, Graham Hanson, second and Ethan Balzer, lead, won one game and lost two. Coach and Brooks’ teacher Gerry Anderson said the boys had a great time regardless and that the experience they gained this year will be a big advantage for next season.

Anderson said the girls are excited to compete in Richmond and he hopes to see them continue in their success.