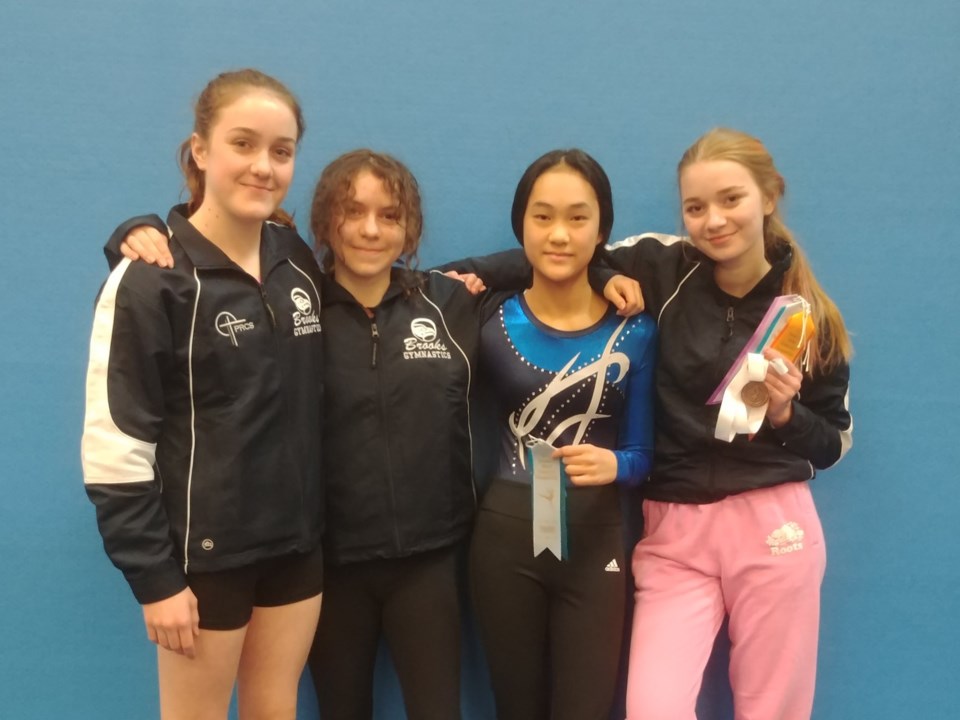 A gymnastics team from Brooks Secondary School has earned a top 10 placing at the recent BC Secondary Schools Championships, hosted by Inspire Sports in Victoria earlier this month.

“Khang’s best event was the beam where she won the bronze medal with a score of 9.1, helping her to place 17th all-around out of 43 athletes in her Level 1 Junior division,” wrote Bailey. “English’s best event of the day was the floor where she placed 11th with an all-around placing of 13th for Level 5, the highest and most difficult level of high school gymnastics.”

Mackenzie was the “Star Athlete” of the meet, added Bailey. “Mackenzie’s best event was the vault where she won the bronze medal, also with a score of 9.1, helping her to the bronze medal all-around out of 32 athletes in her division of Level 1 Seniors.”

Joining the Brooks team for the trip was Partners in Education athlete Trinity Jacques. “Jacques earned a spot in the provincials just weeks after rejoining gymnastics following some time away from the sport.” Her best event was vault where she earned fifth place out of 43 athletes in Level 2.

Also joining in the trip was Madison Belyea from Powell River Christian School. “Belyea earned bronze on the uneven bars with a score of 9.425, fourth place on vault for a sixth place all-around out of 43 athletes in her division, Level 2,” stated Bailey.

As a team, combining their best scores, Brooks placed 10th in the province out of 80 teams.