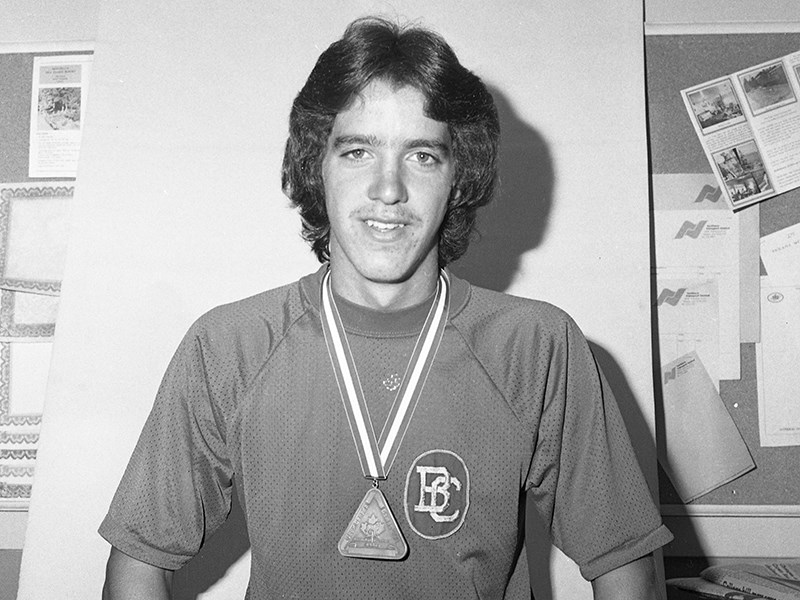 NATIONAL CHAMP: Soccer player and coach Drew Ferguson is being inducted into Powell River’s inaugural Sports Hall of Fame. He is seen here returning home with a gold medal from the Canada Summer Games, where he was a standout with the BC soccer squad in 1977. Powell River Historical Museum and Archives photo

In its inaugural year, Powell River’s Sports Hall of Fame will induct one team and eight athletes who have had a lasting legacy. In the weeks leading up to the gala, taking place June 15 at Hap Parker Arena, the Peak has been profiling the inductees, giving more insight into their accomplishments and contributions to the fabric of the community.

“I started playing when I was six or seven years old,” he said. “Somewhere along the line I guess I was fairly good.”

The beautiful game was not the only sport Ferguson excelled at. He did well in volleyball, basketball, and even set a record in track and field.

“I ran the fastest mile for a 10-year-old in the world: 5:33.34,” said Ferguson. “I always joke that that was more important than anything I did in soccer.”

As a boy growing up in a soccer family, he dreamed of making the sport his career.

“By the time I was 10, I'd made up my mind that I was going to be a professional soccer player,” he said. “Back then I followed what was then called the English First Division. I'd have magazines sent over from England and follow the soccer players.”

At 15 he participated in a soccer camp and the guest coach was one of his idols.

“His name was Jackie Charlton,” said Ferguson. “He played in the 1966 World Cup, which England won.”

During one of the sessions, Charlton noticed Ferguson’s soccer skill.

Days later, Ferguson found himself in the United Kingdom apprenticing with Leeds United, a professional association football club based in West Yorkshire.

“I lived with Jackie Charlton and his family,” added Ferguson. “That would be like a young Canadian kid saying ‘I went and lived with Wayne Gretzky.’”

The experience of apprenticing for a major team involved everything from laundering uniforms and cleaning boots to training with top-ranked coaches and players.

“It was like another world because they were one of the biggest teams in Europe at that time,” he said.

After returning to Powell River, school and normal life, Ferguson went on to sign his first professional contract with the Vancouver Whitecaps at 18.

“That was the best time,” he said. “As a kid you dream of being a fireman, policeman, hockey or soccer player. The fact that my goal was to be a professional soccer player when I was 10 and I made it at age 18, that was very rewarding.”

Over the next 11 years, Ferguson played in Canada, the United States and England. His former teams include the Edmonton Drillers, Burton Albion, Buffalo Stallions, Cleveland Force, New York Cosmos, Chicago Sting, Hamilton Steelers and Cleveland Crunch. During this timehe was named MVP on three occasions.

During the 1977 Canada Games he scored in the championship game. In addition to representing his province, from 1985 to 1991 Ferguson was also a member of the Canadian national team.

“Representing your country is probably the biggest thing you can do in your life,” he said.

He made his first appearance with the team at age 27 in a 2-1 win over Trinidad and Tobago.

Ferguson’s coaching career began while he was still playing with the Kitchener Spirit. During the 1990/1991 season he undertook the role of player/coach/general manager.

“I retired after the ’91 season and moved back to Powell River,” he said. “To me, this is one of the greatest places in the world.”

In addition to coaching, Ferguson has delivered coach education courses, was a selector for a provincial representative team, general manager and head coach of Powell River’s soccer academy and technical director of the Powell River Youth Soccer Association. He is a member of the national coaching certification program and was a contributing member to the development of the long-term player development model for athletes with disabilities in Canada.

Ferguson has beenhead coach of Canada’s National Para Soccer Team since 2005. During his time with the program he has guided the team through the rankings to its current world position.

“There are 76 countries that play in the para program,” he said. “We're ranked 10th in the world, so we've come a long way.”

Players have cerebral palsy, a neurological condition that affects body movement and muscle coordination, or have had a brain injury or suffered a stroke.

“I've seen these kids mature as players, but more importantly build confidence and mature as people,” he said. “I just love what I'm doing. People say ‘when are you going to retire?’ but I don't know that I want to.”

Next up the team will compete in the Para World Cup in Seville, Spain, this July. Before that, Ferguson said he is looking forward to attending the Powell River Sports Hall of Fame ceremony in June.

“It's an honour for sure, and I'm going in with high-quality athletes,” he added.

Travelling the world has made Ferguson aware that Powell River is unique in the calibre of coaches and athletes it has produced, he said.

“We're from this little teeny town and we have professional football and hockey players, Olympic athletes; for a small town it's amazing,” he added. “We all had unbelievable volunteer coaches [growing up here] and none of us could've gotten where we are without that.”