How the NHL’s COVID-19 protocol failed the Canucks 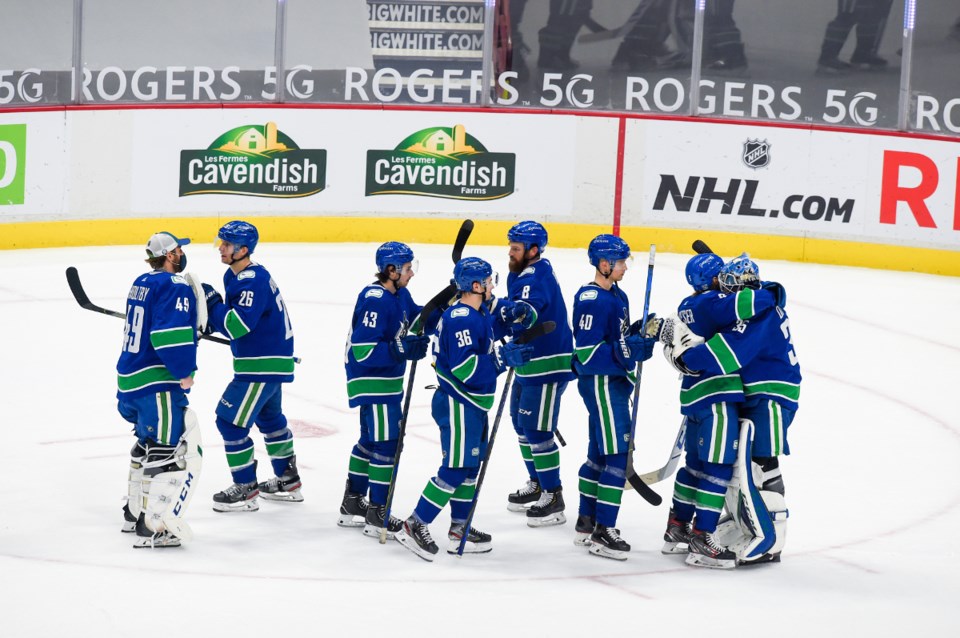 For most of the NHL season, the all-Canadian North Division has managed to avoid significant COVID-19 outbreaks. Now, Vancouver is hosting the biggest outbreak the league has seen this year.

The Canucks’ outbreak started quietly, with just one player testing positive for the coronavirus on Tuesday. Then it was one more player and a coach on Wednesday. From there, it steamrolled until there were more than 21 COVID-19 cases between the Canucks players and coaching staff by the end of the weekend.

While the outbreak likely could not have been prevented — the community spread of COVID-19 and the highly transmissible P.1 variant in B.C. made it almost inevitable that someone from the Canucks would contract the coronavirus — it’s possible that the spread could have been mitigated.

Adam Gaudette was the first player to test positive for COVID-19. When his result came back from Monday’s daily test, Gaudette was immediately pulled off the ice but the Canucks kept practicing.

Then, on Wednesday, the Canucks acted as if it was business as usual, taking their typical morning skate as if it was any other game day.

“We’re preparing to play, we haven’t been told otherwise,” said Canucks head coach Travis Green after they took the morning skate. It was only when they got Wednesday morning’s test results back — expedited so they’d be ready before game time — that Wednesday’s game was postponed and the Canucks’ players and coaches went into isolation.

There were two key decisions made by the Canucks that look highly questionable now: continuing practice on Tuesday and taking Wednesday’s morning skate. But it’s not just hindsight  — there were many voices questioning why the Canucks were taking their morning skate together just 24 hours after a player tested positive for COVID-19.

At the same time, it’s hard to place the blame on the Canucks. The team may have exercised bad judgment but it never should have been a judgment call in the first place

There was one thing that Green repeatedly emphasized on both Tuesday and Wednesday: the team was following the NHL’s COVID protocol.

“We've been following NHL protocol and we're getting ready to play a game tonight,” said Green after Wednesday’s morning skate. “We’ve tried to just stay focused on that task and let the people in charge that advise us on the protocols let us know if there’s anything else changing.”

For Green and the players, their focus has to be on the game itself. What let them down are the people who advise them and the protocol they were following.

Why isn’t it part of the NHL’s COVID-19 protocol for teams to wait for the previous day’s test results before starting practice? Why doesn’t the protocol demand that teams immediately cancel a practice when a positive test result is received? Why are there not more stringent requirements for a team to return to the ice after a positive test?

Ultimately, it’s because the NHL’s COVID protocol is a compromise.

No quarantine for close contacts

The protocol does not require close contacts of people who test positive for COVID-19 to quarantine, something PITB identified as a red flag back in December when the protocol was first released. Only those who are deemed “high risk” close contacts need to isolate.

Evidently, practicing with teammates on the ice without masks is not considered “high risk.”

The issue is that if all close contacts needed to quarantine, then entire teams would need to isolate as soon as a single positive test result came back because all players are close contacts on the ice. It would cause a scheduling boondoggle, as games would be getting postponed all the time, even more than they are already.

So, the compromise. Daily testing, all sorts of masking and social distancing requirements off the ice, and a whole lot of hope that if and when a player does contract the virus, they don’t pass it on to too many of their teammates and opponents on the ice when they’re in close quarters, maskless, breathing heavily from the exertion of playing one of the most cardio-intensive sports on the planet.