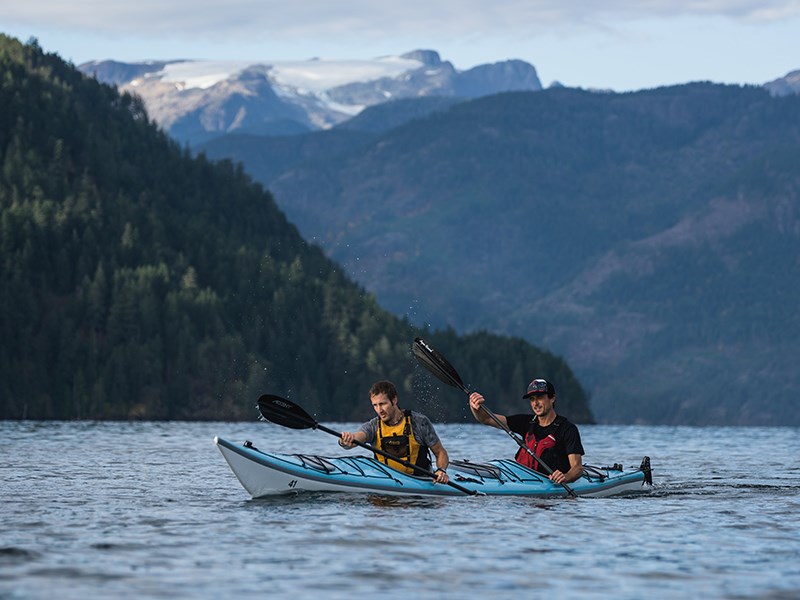 Powell River was well represented once again at the recent Mind Over Mountain Adventure Race (MOMAR). Graham Cocksedge and Nygil Goggins topped the podium for the second year in a row in the endurance competition taking place on Comox Lake September 29.

Close to 700 racers participated in the 19th annual event, which offers a 50-kilometre enduro course and 30-kilometre sport course.

“Racers crossed the finish line with fatigue but very satisfied smiles, just the way we like it,” said race director Bryan Tasaka.

Cocksedge and Goggins completed the race, which includes mountain biking, paddling, orienteering and trail running over rugged terrain, in 4:41:12. The multisport sprint involves navigating to a series of checkpoints within an eight-hour time limit.

“It’s always treated as fun until you’re in the midst of it and you remember ‘oh yeah this is really intense, really painful and it’s long,’” said Cocksedge. “But still it’s fun in its own way.” Cocksedge said a team from Powell River including Lucien Ervington and Chris Bratseth have participated in the event for many years, last year winning as a team of four. When the other team members were not able to join this time, he and Goggins still took part.

“This year we went to a team of two and again it went super well,” said Cocksedge.

Goggins, now based in Cumberland, graduated from Max Cameron Secondary School and still has ties to Powell River.

“Nygil grew up here so it’s kind of great to bring him back into the fold,” added Cocksedge.

Although they do not train specifically for the event, all competitors are involved in a variety of outdoor sport and activities.

“Lucien, Chris and I all work in the district school system so we’re always active with the kids,” said Cocksedge. “We have them out hiking, mountain biking or running.”

MOMAR has staged 39 races in BC over 19 race seasons and Cocksedge said the local team will definitely be involved in future events. He encourages others in the community to take up the challenge as well.

“It would be nice for other people from Powell River to form up teams,” he said. “It's always great to race with people who are from your hometown.”

For more information go to mindovermountain.com/momar.