Nicolas Ouellet won over an opponent from Quebec via submission in the first round
Jun 14, 2021 4:15 PM By: Vanessa Bjerreskov 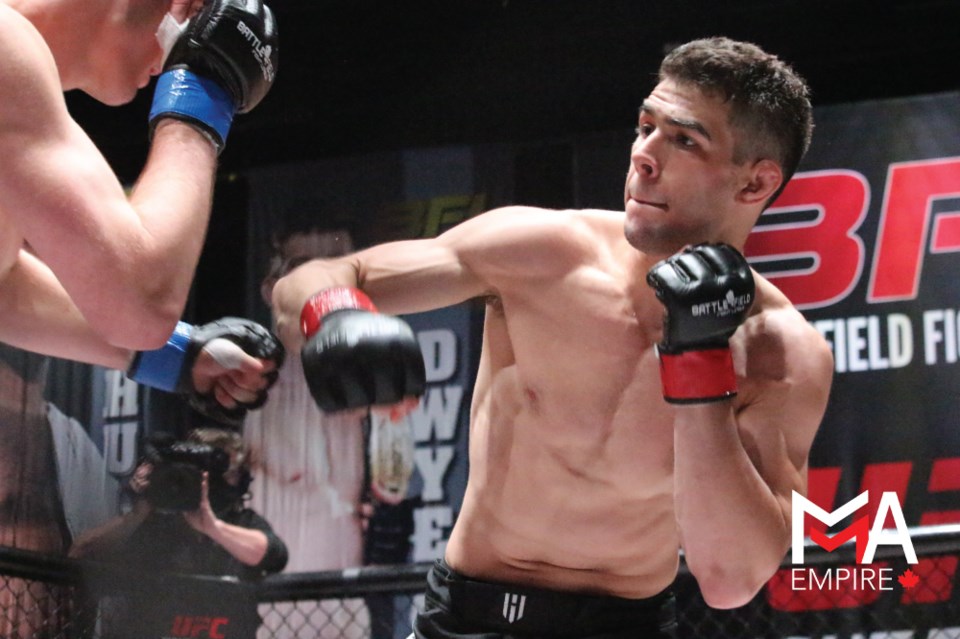 “It’s a great feeling to win my first pro match,” said Ouellet, who owns, coaches and trains at Powell River Brazilian Jiu Jitsu. “Even though there were no spectators in the venue because of COVID, there were lots of people watching on UFC Fight Pass, and the support from people back home on social media was fantastic. It’s overwhelming, and makes me very grateful.”

Ouellet was undefeated in his amateur career, and received Battlefield Fight League’s amateur lightweight belt in 2019.

“I was training to defend my belt when COVID hit,” he said. “I was planning on spending a bit more time in amateur before going professional, but only professional matches are being offered right now, so that made the decision to jump in a bit easier.”

“The match went exactly the way I planned,” said Ouellet, “I was able to bring it to the ground and get a submission pretty quickly with a triangle kimura. It’s pretty hard to come out of a cage fight uninjured, but I told my mom I’d come back pretty, so I did my best to keep that promise.”

Ouellet and Popowich-Bastien fought in a 150-pound catchweight class, between 145-pound featherweight and 155-pound lightweight. For Ouellet, who normally weighs in the mid- to high-160-pound range, making weight before the fight took planning and dedication.

“My partner Dee helped me with portion sizes and diet, but I had to do a water cut for the first time ever,” said Ouellet. “We did a lot of research on how to do it safely and properly. I dropped 10 pounds for weigh-in, and after that I hydrated like crazy.”

Ouellet had a lot of support, both locally and across the province, in preparing for the match.

“I have to thank the Powell River Brazilian Jiu Jitsu team and my brother Raphaël Ouellet for helping me train and get ready for this match, and also my coach Andrew Thistle and my partner Deidra Cathcart for all their support and advice,” he said. “My sponsors have also been amazing, so a big shout-out to Tla’amin Lake Contracting, Nimbus Hemp Company, Avid Fitness, Epiphanic Entertainment, Mayet Massage Therapy and Studio 101 for all their help getting me to where I am today.”

“It was a good experience all in all, even with some of the COVID differences, like no spectators in the arena,” he added. “This was a great start, and I’m looking forward to the next match, whenever that will be.”