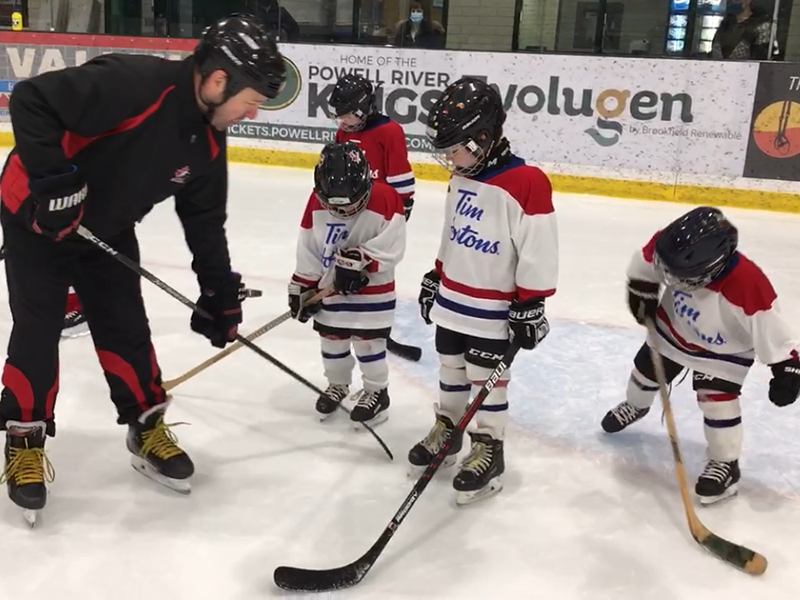 GAME-READY SKILLS: Powell River Minor Hockey coach Joe Caldarone has been working on core fundamental skills with young players in order to continue their development while COVID-19 protocols, which do not allow for games to be played, remain in place.Contributed photo

“We’re up, we’re healthy and we’re running,” said Hopper. “Virtually during this whole pandemic time, we’ve managed to keep our programming going, and that hasn’t been an easy task because things have changed so dramatically.”

Current province-wide restrictions state youth sports must follow phase two of viaSport’s Return to Sport, meaning games, tournaments and competitions are temporarily suspended. However, drills and training activities are permitted with enhanced safety protocols, including physical distancing and a ban on spectators.

In practical terms that has meant operating a program that resembles a hockey school, said Hopper.

“The programming we’ve done does not look like what traditionally you would see in minor hockey,” he added. “Typically, kids are put onto teams and they’re playing games and they’re travelling to other communities and all that kind of stuff, and they’re going to tournaments or hosting tournaments, and it’s fairly vibrant.

“But we’re still managing to get the majority of our kids out skating and participating in hockey. There’s so many different things you can work on in hockey.”

While minor hockey games within associations were temporarily allowed to take place last fall, Powell River Minor Hockey (PRMH) was only able to play a handful of games before new orders restricted travel to and from the local health region.

PRMH belongs to the Vancouver Island Amateur Hockey Association, but falls within the jurisdiction of Vancouver Coastal Health, meaning players could not travel for games against other teams within the association, which are part of Island Health.

“We were kind of in a unique situation where our cohort was on Vancouver Island, and that’s the association we play in, but because of our health region being the Lower Mainland, we got caught up in the rules that were coming out with them,” explained Hopper.

Nonetheless, Hopper said PRMH was able to quickly transition to a player development program in late September thanks to the training of coach Joe Caldarone, who completed the Hockey Canada Coaching Program in Calgary two years ago, and is in the process of obtaining certification as a Hockey Canada skills coach.

“I just thought it was really important for us to get a person like that,” said Hopper. “Well, this year, that position paid a huge dividend, because Joe has virtually run at least 50 per cent of our on-ice sessions.”

Caldarone said he has been working on core fundamental skills with the players, including skating, puck control, passing, receiving, shooting and checking.

“We’ve been progressively getting ready for if and when games will happen,” explained Caldarone. “It’s been a challenge because we practice to have game-ready skills, and we haven’t had any games this year, so it’s been tough that way.”

Caldarone added it’s been a tough year overall for the players, but that he tries to make practice sessions as fun as possible.

“I’m reminding them, at least we’re getting to get on the ice, and getting some exercise and being with our friends, and to stay positive that way,” he said. “I think when we do play games, they’ll have a greater appreciation to pull on the green and gold of the Kings’ colours, and actually play a game.”

Overall, Hopper said challenges of COVID-19 have benefitted PRMH as much as they’ve harmed it, noting the organization has been the only local minor sporting entity that has operated during the pandemic.

“That speaks to the strength of minor hockey, the fact that we got up and rolling in September,” he said.

While it’s difficult to gauge team morale without the pressure of team games and competitions, Hopper said he sees the positive impact on-ice training has in raising the players’ spirits.

“I’m on the ice quite a bit, and one thing I can say is I see some smiling faces and some kids with some sweat when they’re coming off the ice,” he added. “And you know they’re getting good physical activity, they’re doing it with like-minded kids.”

Amid the challenges of the past year, Hopper said PRMH is grateful for the support from City of Powell River, the community and local business sponsors.

“The city is a huge supporter of minor hockey. Our business community is second to none. We’ve always enjoyed some really good support from them with our sponsorship program, and this year is no exception,” said Hopper. “Last year we built a brand new sponsorship board in the warm room down at the arena, and that went really well. We got some sponsors on board for that, and many of them have returned this year and helped us out financially, which is fantastic.”