“We’ve been eating out of cardboard boxes for about two weeks now. The food has been very good so there are no complaints there.”
Apr 23, 2021 10:00 AM By: Desiray Fenrick 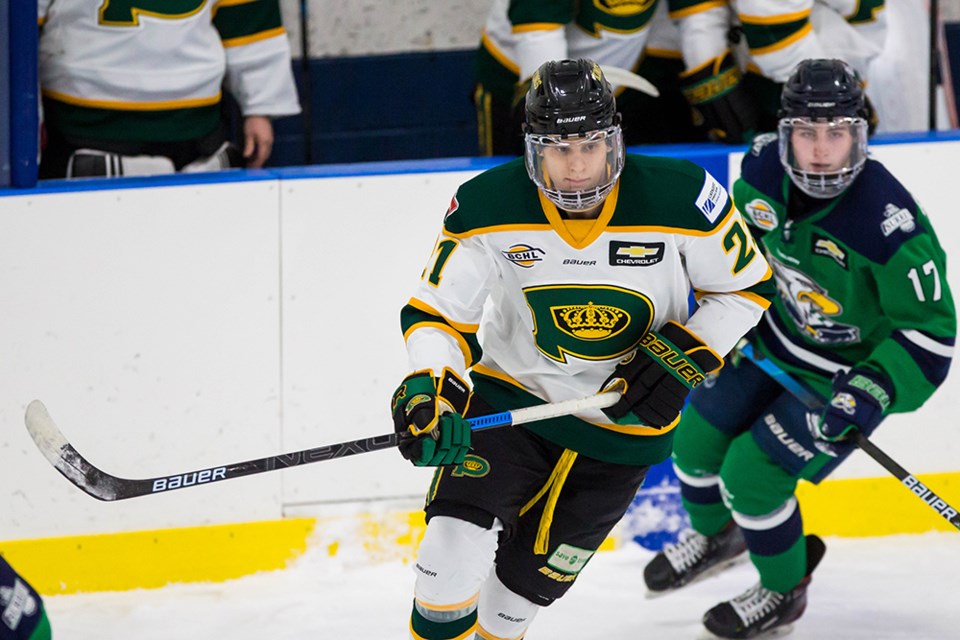 BURNABY BUBBLE: In order to complete a shortened 20-game season, Powell River Kings forward Caleb Parkhouse [above] and his teammates are sequestered in one of five BC Hockey League bubbles. All games are played at Scotia Barn in Burnaby against only Coquitlam Express and Surrey Eagles.Damon James photo

Powell River Kings are making the most out of a shortened BC Hockey League season and rookie forward Caleb Parkhouse is adjusting to life on the road. The Kings have been in a bubble with Coquitlam Express and Surrey Eagles since the season started on April 3.

“It’s been interesting; we met half our team pretty much at the start of the bubble here,” said Parkhouse. “Just going through the games and getting to know all these new players has been an experience like no other in such a short amount of time.

“We had pretty much a full team, then as the season got delayed over time, and as they pushed the season back month by month, guys started to drop out one by one.”

By Christmas there was only a core group of about 11 or 12 players who continued to practice with the hopes of there being some sort of season.

“That group became quite close, just because of how unique it was,” said Parkhouse. “Once we got to play it was on the management side to line up players who were willing to come down to the bubble with us.”

The Kings picked up most of their new players from the Kamloops Storm Junior B team, which competes in the Kootenay International Junior Hockey League, and a few others from around BC. Players quarantined for two weeks, had COVID-19 tests and as soon as the tests came back negative they headed onto the bus to travel down to Vancouver to play in the Burnaby bubble.

The BCHL is using five different bubbles to limit travel and exposure. COVID tests are done every two weeks. Powell River is in the midst of a 20-game schedule, facing only Coquitlam and Surrey. The 10 games against each opponent will most likely end up being the entire season.

“It’s been good; obviously it’s a lot different compared to every other season,” said Parkhouse. “Growing up in Powell River it’s always been sort of a dream of mine to play for the Kings and this is not like anything I dreamed up.

“That being said, it’s still been quite the season. I’ve met a lot of really cool guys. We’ve grown quite close just because of these strange predicaments. We’ve sort of been building a team around these abnormalities.”

Parkhouse rooms with forward Josh Kagan and describes life on the road and playing in the bubble as pretty routine.

Players are allowed to go for a walk. There is a park about 10 minutes away from the hotel but masks must be worn at all times and players follow social distancing measures.

“On a nice day where we have the day off, some of the guys will head over to the park and chuck the football around,” said Parkhouse. “Since restaurants aren’t allowed to be open in Vancouver right now there is a restaurant in the bottom of the hotel and they just cook for us and then put it in cardboard boxes; we’ll go down to the lobby and pick it up to bring back to our room.

“We’ve been eating out of cardboard boxes for about two weeks now. The food has been very good so there are no complaints there.”

Game days start with breakfast and a team walk to get the legs going and some fresh air, he added. This is followed by a video session to go over previous game tapes and discuss improvements for the upcoming game. Depending on game time, players will return to their rooms for some rest before a pregame meal.

“Depending on how I’m feeling I’ll try and get a nap in or maybe go for another walk before loading the bus around 5 to 5:30 pm, and then it’s off to the rink, headphones on just trying to get prepared for what’s ahead,” said Parkhouse. “Tensions get high, especially as games go on, and it’s becoming quite competitive. It should be interesting once we get towards that 15 to 20 game mark. It will be a bit of a bloodbath out there.”

Usually at this time of year arenas are full of playoff fans, however, with all the restrictions, the arenas, including Scotia Barn in Burnaby, are empty and home-ice is not a factor.

“It wasn’t too much of an adjustment process for me; I’ve never really played in a league where there was that huge of a fan base,” said Parkhouse. “It’s definitely disappointing, going to Junior A games as a kid and hearing that roar after a goal is something to look forward to that was kind of taken away. It’s been quite the year, but in a good way.”

Born and raised in Powell River, Parkhouse has been away on Vancouver Island for the majority of his hockey career. The opportunity to play for the Kings has been a welcome homecoming.

“I always miss home, especially right now with it being so late,” he said. “For me this is usually golf season. I’m usually on the course swinging a club but instead I’m in a cold arena. It’s with the times; we were lucky to get the opportunity to play so you just have to go out there and make the most of it.”

Parkhouse said living at home was a bonus while preparing for the season, the status of which was in limbo all winter.

“It’s something I haven’t done in awhile,” he added. “It was nice being able to see my family every day and my hometown friends along the way, as much as I could with restrictions and social distancing in mind.”

At the end of the season he will return to Powell River to work, golf and stay in shape for next year.

“[I’ll] get prepared for whatever next season is going to look like; hopefully it’s going to be not as much of a mental battle as this year was and they give us some leeway to have somewhat of a regular season, but who knows what’s going to happen,” said Parkhouse. “[COVID] is not so much a distraction. Once you’re on the ice it kind of just goes into the back of your mind and you just have that one task in front of you, which is to win a hockey game.

“Sports is actually kind of therapeutic for me. It’s that one time where nothing else matters and you can just get on the ice and everything else sort of clears and you just have hockey or golf or whatever that sport is to focus on.”

Powell River’s current record in the BCHL Burnaby pod is five wins and six losses. The team’s next game is April 23 against Coquitlam. Game time is 1 pm.