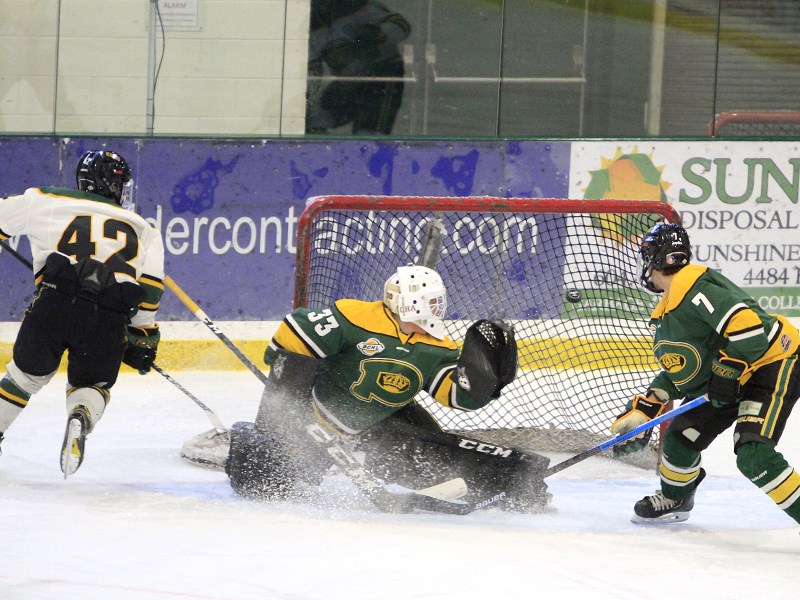 Jacob Silpec (Team White) and Ross Roloson (Team Green) watch as the puck goes over the shoulder of goaltender Nick Peters during a Powell River Kings intrasquad game at Hap Parker Arena on October 28. The BC Hockey League club is preparing for its first exhibition game off the season in Duncan next Sunday. Alicia Baas photo

While the BC Hockey League deals with its first confirmed case of COVID-19, Powell River Kings continue to prepare for their first exhibition game of the season.

The league announced on Sunday, October 24, that a member of the Surrey Eagles had tested positive for the virus and was placed in a 14-day quarantine. All other Eagles players and team staff were tested with negative results. One test had yet to be returned.

Surrey’s game against Langley Rivermen that day was postponed. Also postponed, out of an abundance of caution, was another October 24 game between Chilliwack Chiefs and Coquitlam Express. The Chiefs had played the Eagles two days prior.

Kings are scheduled to play in Duncan against Cowichan Valley Capitals on November 8. General manager Chad van Diemen said his players are following COVID-19 protocols set out by the league and provincial health officials.

"Everything is going well; we have our COVID check every morning,” said van Diemen. “A questionnaire goes out to the guys that they have to fill out and then we take their temperature before they enter the building, so we’ve been fortunate.

“Our guys are being pretty diligent with things and, knock on wood, we’ve been able to stay healthy. All we can do is follow the steps and I commend our guys for how they have been doing with that.”

van Diemen said by all accounts it sounds like Surrey went through all the right protocols and that the one case is isolated.

“All the players and everyone through the contact tracing was tested and fortunately everything is negative,” he added. “We’re just watching from a distance and hearing what they did and it sounds like they took all the right steps; we are pretty thankful for that and it is good news.”

Kings held an intrasquad game at Hap Parker Arena on October 28 as training camp ramps up.

“We’ve had a lot of practice time, so yesterday was our first scrimmage where we were able to video, and we’re able to use a lot of teaching points off that,” said van Diemen. “We’re going to analyze that and use it to get better. It was a nice trial run to go through all of our systems to make sure we are good to go for when exhibition play starts.”

In terms of on-ice play during the intrasquad game, van Diemen said there were a lot of positives and a lot of things exposed that the team still needs to work on.

“Our goal is to keep getting better every day, going through that part of the process and improving and teaching,” he added. “We have a lot of video to go over with the players.”

van Diemen said many of the players have November 8 circled on their calendars, eager to compete against non-teammates for the first time since March.

“It’s been so long since we’ve played hockey, so all the guys are just ready to get going; they are excited,” he added. “They are definitely chomping at the bit, especially the older guys who are in their final season.”

Three regionally-exclusive exhibition tournaments are currently underway on Vancouver Island, in the Lower Mainland and the Interior ahead of the December 1 tentative start date for the BCHL regular season. No fans are allowed in the rinks.

~ With files from Times Colonist