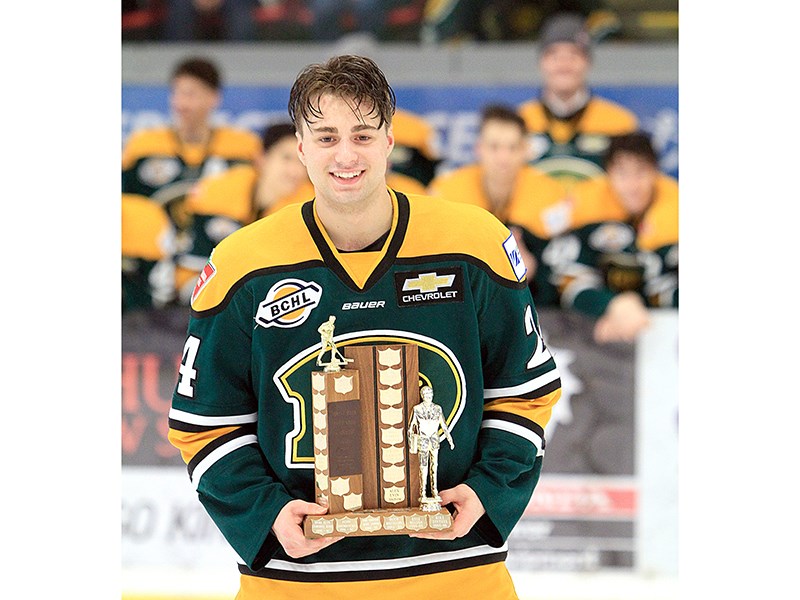 SEASON’S STARTING: Powell River Kings forward Nic Porchetta is looking forward to returning to BCHL play in Burnaby in April. Porchetta is shown with a trophy awarded last season to the Kings player who is most dedicated to his academic studies.Alicia Baas photo

With four Powell River players on the roster, Powell River Kings’ season will begin April 3 against Coquitlam at the Scotia Barn based out of Burnaby. The Kings will be in a pod with BC Hockey League teams from Surrey and Coquitlam.

Peters said he is pumped about the coming season. He said he has been practising since September with the team’s players who have remained in Powell River. He has not been on the ice for a while because he’s had to remain in quarantine in preparation for the move to Burnaby to play in the pod.

Peters said going directly into league play without any exhibition games is going to be tough but he is hoping that practice sessions before the season begins will help the team become cohesive.

Peters is 16 and this is his first season with the Kings. He said he would like to carry on with the team as his junior hockey career advances.

When asked about his strengths in net, Peters said he likes to stand calm in goal.

“Nothing really phases me and I like to be a little flashy at times,” said Peters. “I’m really good at moving the puck to my D-men or forwards up ice. I love playing the puck and making passes. It keeps me engaged in the game.”

Peters said he hopes to get some starting assignments during the shortened season. He said Thomas Wardle is going to get the majority of starts but Peters hopes to get a couple of games in.

Playing for the Kings will be a “cool experience.” Playing in the pod in the Lower Mainland is going to be a lifetime experience, he added.

“This will be the longest road trip in BCHL history,” said Peters.

Powell River forward Nic Porchetta said the new season has been a long time coming. This is Porchetta’s second year playing fully with the Kings.

“It’s been a year since I personally played a game,” said Porchetta. “We’ve been practicing since the end of September and I’m just really excited to get going.”

Porchetta said the team lost some players due to COVID-19 but he believes the current roster is really good.

“We’re fast, quick and there’s smart players on our team,” said Porchetta. “We’re going to surprise a lot of people. We’re trying to bring an exciting brand of hockey to the ice.”

Practices for the Kings have been “super intense.”

“There’s been lots of detail and Brock Sawyer, our coach, and Kyle Bodie, our assistant, have done a great job of teaching us to make us better hockey players,” said Porchetta. “We’re going to go into this pod and we are going to be full of energy and knowledge of the game.”

Porchetta expects with just two other teams in the pod, rivalries will develop quickly. He said Surrey and Coquitlam are not teams the Kings play regularly, but he’s positive that rivalries will not take long in the compressed schedule.

The team is expecting to have two or three practices before the season begins, said Porchetta. He added that the Kings have to be good off the mark.

Porchetta will be turning 19 and would like to play another season or two with the Kings. Playing in Powell River has been a big advantage for him, he said, especially with COVID-19.

Kings general manager Chad van Diemen said the Scotia Barn, where the Kings will be playing, used to be known as Burnaby Eight Rinks. He said the Kings will be facing their opponents 10 times each during the season so he expects rivalries to develop quickly.

There are intricacies to relocating the franchise to the Lower Mainland for 40 days so there are many logistics to making the season work, but van Diemen said everything is falling into place. He said testing for COVID-19 for the team has begun and once the negative results are in, the team will be relocating to a hotel in Burnaby on March 30. Currently, the team is quarantined.

The players are excited about getting back in action, said van Diemen.

“It’s been a long journey for them and they are ready to come out and get back on the ice,” said van Diemen. “I’m excited for the players and their families that they get to play hockey this year.

“I’m thankful for the opportunity. Our league has put in a lot of work. We’re fortunate and happy to be playing. It’s a big ask, relocating everybody to Burnaby for the season, but it’s definitely worth it. We wanted to do everything as an organization to get the players back on the ice.”

Fans can follow the games on Hockey TV on the internet. A great job will be done to put on a production and at Scotia Barn, they are working hard to get the broadcast as professional as possible, said van Diemen.