Former NHL hockey player to be inducted at inaugural ceremony
Apr 12, 2019 8:00 AM By: Sara Donnelly 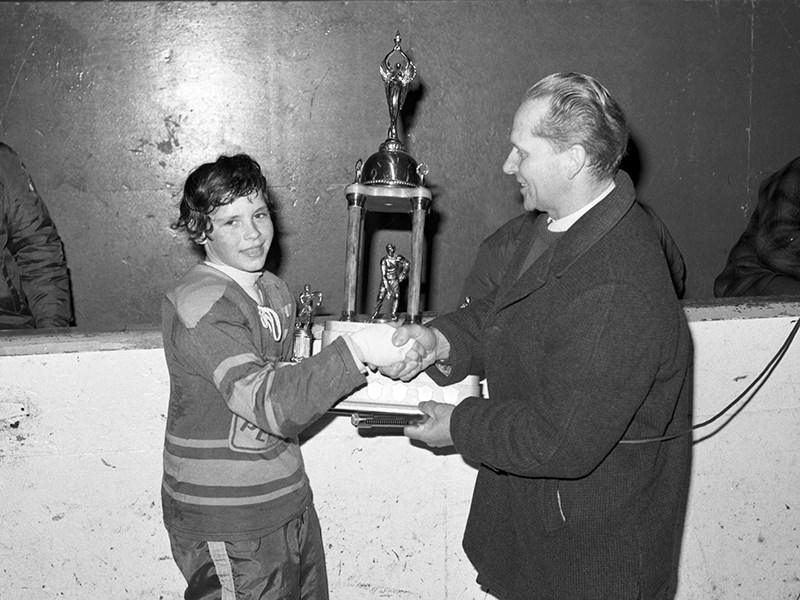 In its inaugural year, Powell River’s Sports Hall of Fame will induct eight athletes and one team that have had a lasting legacy. In the weeks leading up to the gala, taking place June 15 at Hap Parker Arena, the Peak will profile the inductees, giving more insight into their accomplishments and contributions to the fabric of the community.

First up is Gary Lupul.

Lupul was born in Powell River in 1959, the third of four children, to Vic and Jean Lupul, who had moved to the community from Alberta in 1952. Hockey was part of the family DNA, according to sisters Sandra Clark and Corey Martin. They, along with brother Terry, all still live in town.

“When our parents first moved here from Alberta, I think they were quite sad there was no arena,” said Clark. “Dad helped volunteer to build the old arena that was on the site by Willingdon Beach.”

When the facility was built, hockey became so popular the rink almost never closed.

“It was huge to the point that our dad would play and get off the ice at two in the morning and then the kids would leave the house at 5 am,” added Clark. “There was only two or three hours of dead ice in the middle of the night. You had to be a dedicated parent.”

At that time, there were enough children in most neighbourhoods to make up a decent street hockey team and young players, including Gary, would stream out of their houses for rousing road games whenever the weather was good, recalled Clark.

Gary showed athletic aptitude in his earliest years, excelling at any sport he tried.

“He was an athlete from day one,” said Clark. “Any sport he took up, he did well.”

He began playingminor hockey at age five and was soon getting attention.

“He was scouted very young; he was nine or 10 and he was being noticed,” said Clark. “People always think if you try hard you can make it, but you actually have to dazzle.”

By age 15 Gary had moved to Vancouver Island, first to play for the Nanaimo Clippers and then the Victoria Cougars. He excelled in both the BC Junior Hockey League and Western Hockey League, scoring 53 goals in the 1978/79 season.

“In junior he had a stellar career,” said Clark. “Some of his records stood for years and years and he ended up being picked up for Team Canada to go to the world juniors in Sweden.”

That same year, 1979, he signed a free-agent contract with the Vancouver Canucks. The organization decided to run its training camp in Powell River’s new recreation complex. Fans and spectators packed the bleachers in the arena for every practice, recalled Martin.

“It was so exciting to have all the Canucks here at our rec centre,” she added. “[The Canucks] had never seen anything like it, to have the fan support for just a plain old practice.”

At 5’9” and 175 pounds, Lupul showed his scrappy tendency, fighting fellow Canuck Gerry Minor during his first day at the training camp. During that first year, Lupul played for the Canucks’ farm team, the Dallas Hawks, and was called up to join the NHL team in Detroit, scoring in his first two NHL games. He went on to play seven seasons with the Canucks from 1979 to 1986. In 1982 he scored five points in 10 playoff games as the Canucks made it to the Stanley Cup finals for the first time in the history of the franchise. He scored a game winner in the second round against the Los Angeles Kings.

“People appreciated his style and work ethic when he was in the league,” said Martin. “He was a fast skater and he tried hard.”

Lupul had his best years in 1983 and 1984 playing on a line with Lars Molin and Dave “Tiger” Williams. Following retirement from professional hockey, he played a season in Brunico, Italy, in 1986/87 and Berlin, Germany, in 1987/88.

Lupul finished his career with the Canucks as a junior and college scout for the franchise in Ontario. He passed away suddenly in 2007 at age 48. Know affectionately as the “Pride of Powell River,” Lupul’s legacy lives on.

“It’s always nice for him to be recognized,” said Martin of her brother’s induction to the local sport hall of fame. “And it always seems sad to me because he’s not here anymore.”

Despite this, Lupul was able to play at a level that so many youth dream of, said Clark.

“It was always his dream, which is a lot of children’s dream,” she added. “He always said he was going to do it, and he was very lucky to have achieved that.”