Final score of underscores how tough opponents will be this season
Sep 30, 2019 3:00 PM By: Vanessa Bjerreskov 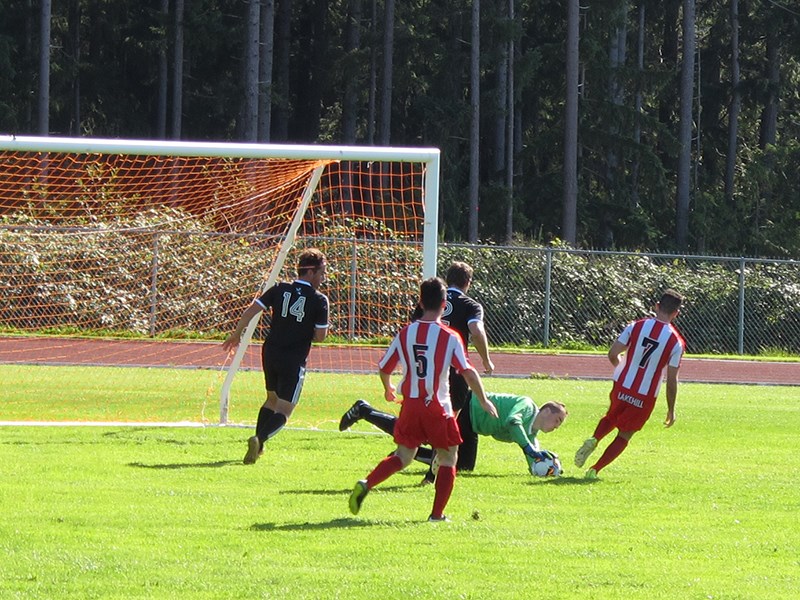 DIVING SAVE: Powell River Villa goalkeeper Scott McKenzie makes a save during a difficult game against Lakehill FC on Saturday, September 28, at Timberlane Park. Villa lost 9-1 to the Victoria team. Vanessa Bjerreskov photo

Villa Soccer Club lost at home to Lakehill FC by a score of 9-1 in a match held Saturday, September 28, at Timberlane Park.

“Everything that could go wrong in a game, did,” said Villa coach Chris McDonough. “We made a lot of mistakes all over the pitch, and Lakehill was able to capitalize on them. I know we’re better than we showed on Saturday, and we’ll take our lessons from this loss to focus on improving next week.”

Villa’s promotion to Division I this season put them in Vancouver Island Soccer League’s top division, playing some of the best amateur soccer teams on the west coast.

“This game was a wake-up call for us as a club,” said McDonough. “Against a good team like Lakehill, you have to come prepared to play your best game, and we didn’t. We have to be better from top to bottom, and we just weren’t good enough yesterday.”

Russell Pielle scored Villa’s sole goal in the game 38 minutes into the first half.

“This is Russell’s first year full time with the team, and he played very well yesterday,” said McDonough. “He intercepted a Lakehill pass, found himself in on the keeper, and was able to finish his chance with a goal. It’s good for him to get his first goal of the season against such tough opponents.”

Villa will focus on regrouping during practices this week in preparation for their match next weekend.

“We’ll take this week to get back to basics in practice and refocus on playing good soccer. We’ll put this loss behind us, and come out next weekend with a stronger effort.”

Villa plays Bays United on Saturday, October 5, in Victoria. Bays United currently leads the Division I standings with two wins and one draw.

Villa returns home for a Thanksgiving weekend game Saturday, October 12, against Nanaimo United FC. Kickoff is at 1:30 pm at Timberlane Park, and tickets are available at the gate.