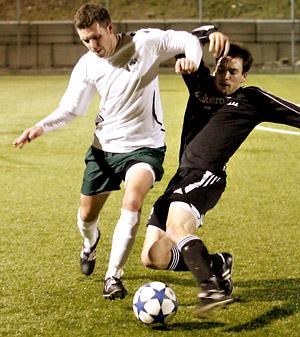 A good crowd turned out to watch the first Powell River Villa game held under the lights at Brooks Secondary School athletic field on Saturday night.

Given the positive reviews by both fans and players coach Jamie Zroback said, “I think we might do some more Saturday night games, it was great.”

If Vic West, a fixture at the top of Division 2 since the beginning of the year, expected Villa to lay down for the top seed, then they were sadly mistaken.

Villa actually set the pace early and were literally a pain in the neck all night with hard tackles and battles for every 50-50 ball.

In fact the opening 10 minutes produced a good run by Brandon Knox down the left wing that gave him a good shot that sailed just over the bar.

Another tic-tac-toe passing play at the 18-yard line ended with Dylan McLean getting a crack at Vic West keeper Tyler Laing, who made the save.

Play evened out for the next 20 minutes until a hard collision between defender Steve Orchiston who got a yellow card and a Vic West forward, who was awarded a penalty kick.

“I was going for the ball,” said Orchiston, “Clearly I elbowed the guy. When you jump up for a ball that’s just what you do to protect yourself.”

Keeper Cory McCracken guessed wrong on the shot and it took Villa a few minutes to settle down after the 1-0 setback.

When they did Orchiston put in a long ball to Knox who headed it just wide while McLean forced Laing to make a very good save from just 10 yards out.

Players were encouraged to keep pressing at the half and they gave as good as they got early in the second half before Vic West scored a controversial goal.

A shot was taken that went off a player who seemed to be offside but the misdirection fooled McCracken and the non call at 70 minutes resulted in a 2-0 lead for the visitors.

Although Villa’s McCracken was the busier of the two keepers the man he succeeded in Powell River, Laing, got the shutout against his old team.

“Not for awhile,” was his answer when asked about his last shutout, “but it feels good to get one at home.”

Laing, who is studying journalism in Victoria, credited his old teammates with a great work ethic and encouraged them to keep doing what they’re doing.

“I thought they were good and I think there is a lot of potential. Obviously, they are missing some key guys that would have made a big difference but they had a lot of energy and they were fighting all the way to the end which is good to see.”

Zroback also liked what he saw during the game saying, “The intensity that the guys played with tonight was incredible. If we can play like that for the rest of the year we’re not going to have a problem with relegation. Even though the result was 2-0,” he said, “I don’t think there’s been a game I’ve been happier with the entire season.”

From his position on the pitch Orchiston reported, “It’s the most heart I’ve seen in these young players so far. A big part of Powell River’s success in the past has been physical, hard play and playing for each other out there. If I go in hard for a tackle, you better be sure you’re going in hard behind me.”

Lessons are learned every game for the young Villa side and they’ll probably learn some more in their next league game, in two weeks, at 1:30 pm Sunday, February 20 at Cranberry Field against Gordon Head Blue.

The next game for Villa, however, is at 1:30 pm on Sunday, February 13 at Cranberry Field. This marks the first game of the Jackson Cup and Villa will play against Sooke Celtic.