OTTAWA — A Liberal MP is advising the Public Health Agency of Canada not to rely on legal advice from the federal Justice Department because it is not always right.
May 10, 2021 8:17 PM By: Canadian Press 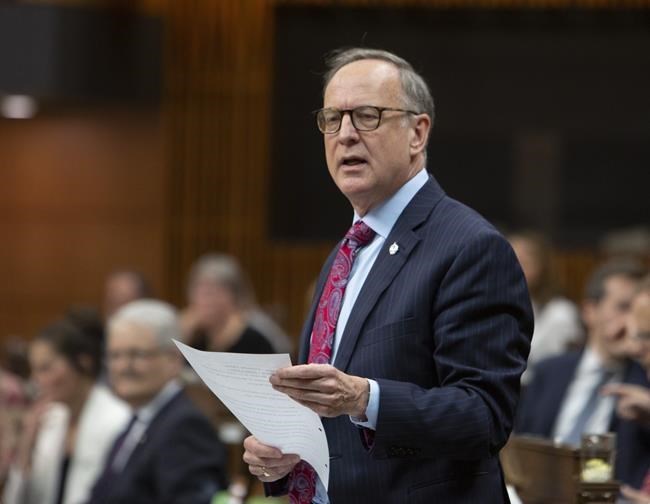 OTTAWA — A Liberal MP is advising the Public Health Agency of Canada not to rely on legal advice from the federal Justice Department because it is not always right.

Toronto MP Rob Oliphant, parliamentary secretary to the Foreign Affairs minister, gave the advice late Monday at a House of Commons committee that is trying to find out why two scientists at Canada's highest security laboratory were fired.

He says that advice was given by the Justice Department.

Committee members, backed up by parliamentary law clerk Philippe Dufresne, insist they have the constitutional authority to order the production of any documents they please and that their authority takes precedence over any other laws.

But Christian Roy, director and senior general counsel of  health legal services at the Justice Department, says the department has never recognized the power of committees to compel documents in violation of the Privacy Act or other laws.

He noted that Justice lawyers were wrong in claiming a law banning genetic discrimination was unconstitutional, after fighting it all the way to the Supreme Court of Canada.

Moreover, Oliphant said he was "horrified" to discover that Justice lawyers had advised the Canadian Security Intelligence Service to illegally keep potentially revealing electronic data about people over a 10-year period.

"I have learned to now question of Department of Justice lawyers," Oliphant said, suggesting that Stewart get "a second opinion because the Justice Department is not giving you the best advice."

The committee voted unanimously later Monday to give PHAC 10 days to turn over unredacted documents about the fired scientists, which the parliamentary law clerk is to review and advise committee members as to what needs to be blacked out to protect privacy, national security and the police investigation.

If the agency continues to refuse to disclose the unredacted documents, the committee will seek an order to do so from the House of Commons.

The pair was escorted out of the National Microbiology Laboratory (NML) in July 2019 over what Stewart has described as "relating to possible breaches in security protocols."

The Winnipeg lab is Canada’s only Level Four laboratory, designed to deal safely with deadly contagious germs such as Ebola.

PHAC has previously said the pair's escorted exit had nothing to do with the fact that four months earlier, Qiu had been responsible for a shipment of Ebola and Henipah viruses to China's Wuhan Institute of Virology.

Stewart has released some redacted documents to the committee about that virus transfer, which he said show that all laws and protocols were followed.

He also assured the committee Monday that there is no link between those viruses and the coronavirus that causes COVID-19, which first surfaced in China's Wuhan province.

That didn't stop Conservative MP Michael Chong, who referred to Qiu and Cheng as "Chinese scientists."

The Public Health Agency of Canada has said it cannot confirm the citizenship status of individuals for privacy reasons, but noted the two scientists "had to be eligible to legally work in Canada" when they were at the federal microbiology lab. In 2018, Qiu received a Governor General's Innovation Award — a recognition that only Canadian citizens or permanent residents are eligible to receive.

He dismissed suggestions that he was peddling a conspiracy theory, citing various experts who've posited that the coronavirus may have been inadvertently released from the Wuhan lab.

Oliphant accused Chong of "drawing two threads that are completely unrelated together," calling it "absolutely irresponsible" and "cheap politics."

Note to readers: This is a corrected story. A previous version reported scientists Xiangguo Qiu and her husband, Keding Cheng, are Canadians. In fact, the Public Health Agency of Canada has said it cannot confirm the citizenship status of individuals.

Canada has admitted broken Indigenous relationship, unlike China on Uyghurs: Trudeau
Jun 22, 2021 10:22 AM

Coal companies hope to move forward with mines in Alberta despite roadblocks
Jun 22, 2021 10:12 AM
Comments