Reopening worries and wake of sorrow: In The News for June 11

In The News is a roundup of stories from The Canadian Press designed to kickstart your day. Here is what's on the radar of our editors for the morning of June 11 ... What we are watching in Canada ...
Jun 11, 2021 1:30 AM By: Canadian Press 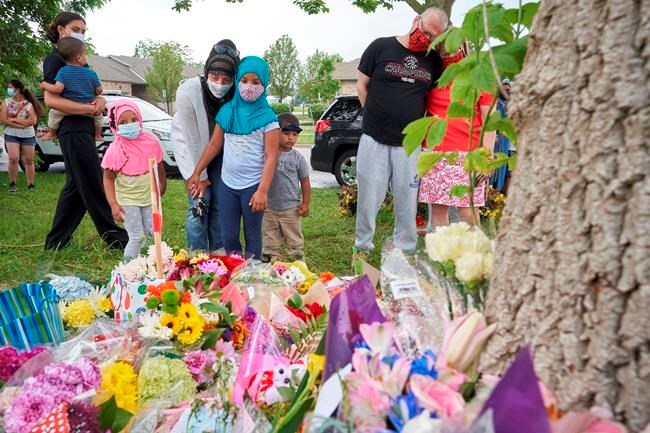 In The News is a roundup of stories from The Canadian Press designed to kickstart your day. Here is what's on the radar of our editors for the morning of June 11 ...

What we are watching in Canada ...

Some provinces hit hard by the third wave of the COVID-19 pandemic have moved toward shedding more public health restrictions, but a national group is calling for those governments to slow their plans.

Zero COVID Canada sent a letter Thursday to the premiers of British Columbia, Alberta, Saskatchewan, Manitoba, Ontario and Quebec "to express our deepest concerns regarding the reopening plans."

"As more and more evidence comes in, it appears that a single dose of the vaccine — including Pfizer — is only about 30 per cent effective against the Delta variant, which is ravaging India and the U.K. right now," the letter says.

"Each new variant has the potential to evade vaccination efforts, and we need to protect our efforts to date."

The group is made up of researchers, physicians, engineers, activists, lawyers, educators, and concerned citizens.

It noted that the variant first identified in India has already caused multiple outbreaks in Canada, including at the Foothills Medical Centre in Calgary, and is behind case spikes in Manitoba and in Peel Region outside Toronto.

Zero COVID Canada also recommends that provinces keep masking and physical distancing, and to only restore capacity limits indoors when 70 per cent of residents are fully vaccinated.

LONDON, Ont. — The deadly attack against a Muslim family in southwestern Ontario was "a senseless act," the father of the man accused in what police believe was a deliberate hate crime said Thursday.

The family was out for an evening stroll when a man driving a pickup truck mounted the sidewalk and ran them over, killing four people and sending a child to hospital with serious injuries.

Nathaniel Veltman, 20, has been charged with four counts of first-degree murder and one count of attempted murder.

"It was with utmost shock and horror that I came to hear of the unspeakable crime committed last weekend," Veltman's father, Mark Veltman, said in an email to The Canadian Press.

"There are no words adequate to properly express my deep sorrow for the victims of this senseless act."

Relatives have identified the dead as 46-year-old Salman Afzaal, his 44-year-old wife Madiha Salman, their 15-year-old daughter Yumna Salman and her 74-year-old grandmother, Talat Afzaal. The couple's nine-year-old son, Fayez, was seriously wounded but is expected to recover.

Police allege the attack was a planned and premeditated act that targeted Muslims.

Meanwhile, calls continue to grow for a national summit on anti-Muslim hate. The National Council for Canadian Muslims has a petition signed by more than 35,000 people calling for all levels of government to tackle Islamophobia.

WASHINGTON — A bipartisan group of senators is eyeing an infrastructure deal with $579 billion in new spending as negotiators try to strike a nearly $1 trillion deal on President Joe Biden's top priority, according to those briefed on the plan.

The 10 senators have been huddling behind closed doors, encouraged by Biden to keep working on the effort after he walked away from a Republican-only proposal this week unable to resolve differences. The senators are briefing their colleagues privately and cautioned changes could still be made.

The president and Congress have been straining to reach an agreement on his ideas for an infrastructure investment, stuck over the scope of the package of road, highway and other projects and how to pay for it. Lawmakers say the group’s tentative agreement represents important progress in fashioning a bill, but they are also aware that it could easily unravel.

With the Senate narrowly split, 50-50, and most legislation requiring 60 votes to advance past a filibuster, Biden is seeking a bipartisan agreement to ensure passage. At the same time, he is also instructing Democrats who control the House and Senate to prepare to pass portions of the package on their own, under special budget rules that enable approval with 51 votes in the Senate.

WASHINGTON — The U.S. Justice Department under former president Donald Trump seized data from the accounts of at least two members of the House Intelligence Committee in 2018 as part of a crackdown on leaks related to the Russia investigation and other national security matters.

That's according to a committee official and two people familiar with the investigation.

Prosecutors from Trump’s Justice Department subpoenaed Apple for the data, according to the people, who were granted anonymity to discuss the secret seizures.

Opening such an investigation into members of Congress is extraordinarily rare. The revelations were first reported by The New York Times.

What we are watching in the rest of the world ...

CORNWALL, Eng. — Prime Minister Justin Trudeau enters the first day of the G7 summit as the only leader who has yet to pledge how many vaccine doses his country will donate to less wealthy nations.

The United Kingdom says leaders are expected to agree to give other parts of the world access to one billion doses of COVID-19 vaccines through donations and funding.

Trudeau is set to meet with British Prime Minister Boris Johnson, who has stated he wants the three-day gathering to produce promises on ways to end the pandemic by the end of next year.

The G7 leaders will take part in a session today that focuses on how the health and economic recovery from COVID can be "for all."

Ensuring equitable access to inoculations against COVID-19 is a call facing leaders from the World Health Organization, as well as anti-poverty and humanitarian groups, since over 80 per cent of the vaccinations to date have been in wealthy countries.

Although Canada has yet to spell out it plans for donating vaccines, it has promised $440 million will go to COVAX, a vaccine-sharing initiative to buy doses directly from manufacturers and give them to lower- and middle-income nations.

JERUSALEM — Israeli Prime Minister Benjamin Netanyahu is not leaving the political stage quietly in what appear to be the final days of his historic 12-year rule.

The longtime Israeli leader is accusing his opponents of betraying the nation. He calls them liars and says he is the victim of a “deep state” conspiracy. He also speaks in apocalyptic terms when talking about the country without his leadership.

Such language has raised tensions as Netanyahu and his loyalists make a final desperate push to try to prevent a new government from taking office on Sunday.

It also has provided a harbinger of Netanyahu as aggressive opposition leader.

The Conscription Act was introduced in the House of Commons. The election that followed passage of the bill was one of the most divisive in Canadian history. Quebec looked on conscription as an attempt to anglicize French-Canadians and throw them into an English war. Sir Robert Borden's coalition government was returned and given the mandate to put conscription into effect. But the measure was a military failure, producing very few men for the front lines.

TORONTO — "The Amazing Race Canada" is heading back on the road for a Bell Media lineup that also includes a "Letterkenny" spinoff and an Indigenous drama from actor-producer Jennifer Podemski and playwright Hannah Moscovitch.

The Canadian media company announced its full 2021-22 season Thursday, including next year's return of the CTV hit travel competition series "The Amazing Race Canada" following a two-year hiatus due to the pandemic.

Justin Stockman, vice-president of content development and programming at Bell Media, said the show is important for the network's summer 2022 schedule.

The Crave streaming service will have the comedy "Shoresy," from "Letterkenny" duo Jared Keeso and Jacob Tierney. Keeso created, wrote and stars as his "Letterkenny" character Shoresy in the series while Tierney directs the story of a northern Ontario senior triple-A hockey team determined never to lose again.

Another new Crave original is "Little Bird," a six-part limited drama created by Podemski and Moscovitch and executive produced by them as well as Jeremy Podeswa. Bell Media is in partnership with APTN on the show.

The series follows an Indigenous woman who was adopted into a Jewish family when she was five. As she searches for her birth family, she learns she was part of the so-called '60s Scoop, when the Canadian government forcibly apprehended Indigenous children from their birth families and communities.

Another Indigenous-focused project bound for Crave is "Thunder Bay," a four-part investigative documentary series based on a Canadaland podcast. Acclaimed filmmaker Elle-Máijá Tailfeathers directs, and journalist and writer Ryan McMahon hosts and produces.

CALGARY — Jim Parker was impressed enough with the improvements his niece had shown after being treated with psychedelic drugs for post-traumatic stress disorder that he was willing to put up his own money for further research.

The Calgary trader anted up $3 million for a new position at the University of Calgary focusing on the use of psychedelic drugs including ketamine, ecstasy and psilocybin — commonly known as magic mushrooms — to treat mental illness.

Parker said he became interested a couple of years ago when his adult niece, Courtney, was suffering from PTSD and addiction issues.

"She tried everything else. She tried antidepressants. She tried rehab and she was stuck for a number of years," Parker said.

"We sent her to a ketamine clinic in Los Angeles. The results were incredible. After years of struggling it was like she just snapped back and was the Courtney we had known several years prior," said Parker.

The Centre for Addiction and Mental Health in Toronto describes ketamine as a fast-acting anesthetic and painkiller used primarily in veterinary medicine. It can produce vivid dreams and a feeling of mind-body separation in humans.

The field of psychedelics to treat mental health is attracting growing interest from the scientific and medical communities.

This report by The Canadian Press was first published June 11, 2021