The latest news on COVID-19 developments in Canada for Tuesday, April 6, 2021 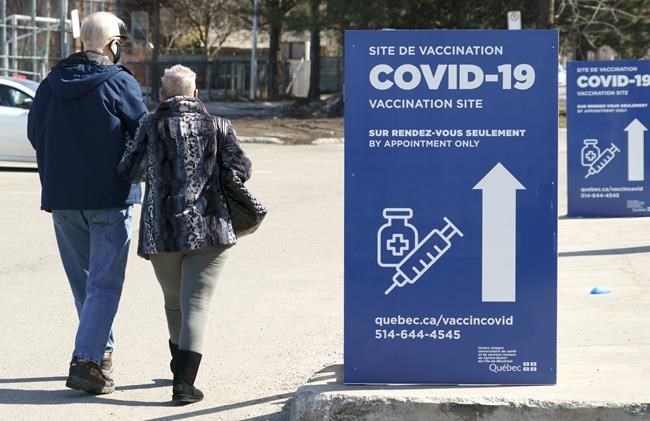 OTTAWA — The latest news on COVID-19 developments in Canada (all times eastern):

The province says 676 variant cases have been identified.

It says nearly 43 per cent of the 10,809 active infections are variants.

There are 328 people in hospital with the illness and 76 of them are in intensive care.

Alberta Premier Jason Kenney is reinstituting some public-health restrictions, saying that variant cases of COVID-19 continue to soar and are on track to swamp the health system by mid-May.

Kenney says that as of Friday, restaurants must close to in-person dining.

Retail stores will be allowed 15 per cent customer capacity rather than the current 25 per cent, and low-intensity group fitness activities are once again banned.

Kenney says Alberta is now seeing a third wave of COVID-19, driven mainly by the more contagious and dangerous variants.

The province averaged about 1,000 new COVID-19 cases a day during the Easter long weekend, and the death total has now surpassed 2,000 in the province.

Testing has confirmed 207 cases involving variants of concern and all but one are in the Vancouver Coastal Health region.

Less than two weeks after easing restrictions, Quebec is reversing its decision to reopen gyms and to bring back all high school students to in-person classes.

Premier Francois Legault says students in grades 9, 10 and 11 in red zones, including Montreal, will return to alternative schedules of in-person learning one day out of every two, starting next Monday.

Legault says gyms in red zones will be forced to close on Thursday.

Health Minister Christian Dube says vaccination appointments will be open to all Quebecers 60 and over by the end of the week.

He says anyone as young as 55 can book an appointment for an Oxford-AstraZeneca vaccine by this Thursday.

Masks remain mandatory in Arviat, the last Nunavut community to have an outbreak of COVID-19, while gatherings in homes will be limited to five people.

Schools in Arviat will operate using a blend of in-person and remote learning.

The last case of COVID-19 in Nunavut was declared in Arviat on March 20 and there are currently no active cases in the territory.

The province says nearly half of the new infections are in the Regina zone.

There are 202 people in hospital with COVID-19 and 44 of them are in intensive care.

Ford says the situation with variants of concern of the virus is changing day to day and people are not following a request to stay at home.

He did not provide any specific details about the additional measures or when they might be imposed.

His comments come a day after top doctors of three COVID-19 hot spots in Ontario urged the province to impose tougher restrictions, including a stay-at-home order.

Manitoba health officials are announcing 62 new cases of COVID-19 and two more deaths from the virus.

Screening has also found five additional cases that are variants of concern.

Public health orders require anyone returning to the province to isolate for two weeks.

The age eligibility for vaccines remains at 64 and older and 44 and older for First Nations people.

Health officials say the Saint John, Fredericton and Edmundston regions each have one case.

Officials are also confirming that the seven cases reported Monday in the Moncton region are connected and are travel-related.

The Vitalite Health Network says the intensive care unit at the Edmundston Regional Hospital is at capacity and new patients will be diverted to other hospitals.

There are 162 active reported cases of COVID-19 in New Brunswick and 18 patients are hospitalized with the disease, including 12 in intensive care.

Canada’s chief public health officer is advising Canadians to avoid interprovincial travel amid concerns COVID-19 vaccines might not be fully effective against new variants of the disease.

Dr. Theresa Tam says she is concerned about people travelling as tourists and gathering for leisure activities.

With new variants of concern now being identified in provinces such as British Columbia, Ontario and Alberta, there is concern Canadians could further spread these strains of the virus across the country.

This means people who have been vaccinated or who have contracted COVID-19 could still get sick or reinfected by the virus.

Prime Minister Justin Trudeau says most provinces have made it clear they don’t need Ottawa’s help when it comes to getting COVID-19 vaccines into the arms of Canadians, but he adds the federal government will be there if needed.

He says political leaders are just as exhausted as Canadian families, business owners and frontline workers, which he believes is why some premiers, including Ontario's Doug Ford, have been critical of the vaccine rollout in Canada.

Trudeau says that when he speaks with Ford later today, he hopes to determine how the federal government can assist Ontario with the third wave of COVID-19 now sweeping the province.

Prime Minister Justin Trudeau says the federal government is delivering the final instalment from billions of dollars announced last summer to help provinces and territories through the COVID-19 pandemic.

He says the federal funding has been used to bolster the capacity of Canada’s health-care systems, secure personal protective equipment for essential workers and protect the most vulnerable.

It has also helped support child-care needs during the pandemic and keep municipalities and public transit operating.

Trudeau now says $700 million, the final instalment from the Safe Restart Agreement, will help provinces and territories with efforts including testing and contact tracing.

Prime Minister Justin Trudeau says he will speak today with Ontario Premier Doug Ford about the COVID-19 situation in Ontario.

He says he expects to discuss what the spike in cases in Ontario means for hospitals and the importance of vaccinating as many people as possible, as quickly as possible.

Trudeau says he will also speaks to all provincial and territorial premiers Wednesday about their efforts to protect and support Canadians from the new variants and rising cases in areas across the country.

NDP Leader Jagmeet Singh is calling on the federal government to do more to help provinces get vaccinations into the arms of essential workers.

Singh says a priority should be workers who cannot stay home and toil in industries where the virus is known to be spreading.

He says Prime Minister Justin Trudeau can help by offering assistance from the military and pushing for paid sick leave.

Singh says he won't accept the excuse that administering vaccinations is a provincial responsibility.

Conservative Leader Erin O'Toole is pressing the government to ask the auditor general to appoint a "special monitor" to track the federal pandemic response as it happens to glean lessons promptly.

O'Toole also says a Conservative government would call a public inquiry to study the federal response to the COVID-19 pandemic.

He says the federal Liberals "dropped the ball" on vaccines and Canadians need to know what worked and what didn't.

Quebec is reporting 1,168 new cases of COVID-19 today and four additional deaths, including one within the previous 24 hours.

The provincial Health Department says hospitalizations rose by 11 to reach 514, with 121 patients in intensive care, a drop of two.

Public health authorities say 39,816 doses of vaccine were administered in the province yesterday, bringing the total to 1,592,197.

Nova Scotia is reporting six new cases of COVID-19 today and a total of 36 active cases.

Five cases have been identified in the Halifax area with one related to travel outside of Atlantic Canada, three close contacts of a previously reported case, and one case under investigation.

There is also one case in the province's eastern health zone identified as a close contact of a previously reported case.

Health officials say that unrelated to the new cases are four new cases of the variant that first emerged in the United Kingdom that have been identified in the Halifax area and have since been resolved.

Morrison says two cases reported on March 26 have been confirmed as the B.1.1.7 variant first identified in the United Kingdom.

She says both variant cases are related to travel outside Atlantic Canada.

Health Minister Christine Elliott says that 955 of those new cases are in Toronto, 561 are in Peel Region, and 320 are in York Region.

She also says there are 165 new cases in Ottawa and 132 in Niagara Region.

More than 76,000 doses of a COVID-19 vaccine were administered in Ontario since Monday's report.

This report by The Canadian Press was first published April 6, 2021.

Note to readers: This is a corrected story. A previous version said Quebec students in grades 3-5 in red zones will return to alternative schedules of in-person learning one day out of every two. In fact, it is students in grades 9-11.