First-place Maple Leafs look to regroup after loss to Flames: 'We're not comfortable'

TORONTO — Sheldon Keefe and his Maple Leafs have a decent cushion atop the North Division. That doesn't mean Toronto is feeling comfortable 20 games into the NHL's pandemic-shortened season.
Feb 23, 2021 2:41 PM By: Canadian Press 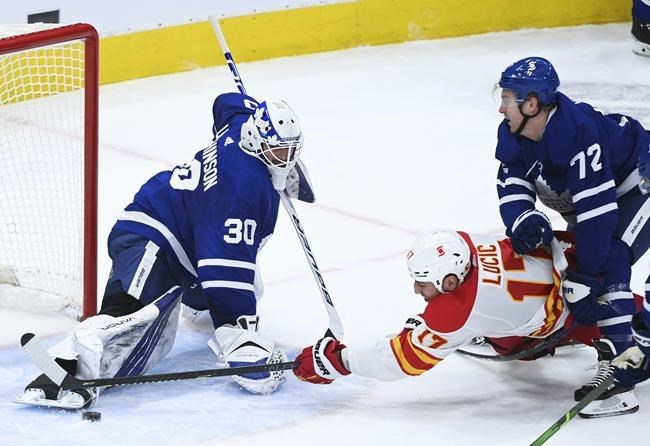 TORONTO — Sheldon Keefe and his Maple Leafs have a decent cushion atop the North Division.

That doesn't mean Toronto is feeling comfortable 20 games into the NHL's pandemic-shortened season.

"You're a bad week away from people catching you," Keefe, the team's second-year head coach, said following Tuesday's practice. "By no means are we comfortable. We've reinforced that message on the daily, paying a lot of attention to the standings, despite it being so early.

"With every point remaining in the division, it's important we're at our best all the time."

Suddenly banged-up Toronto certainly wasn't at that level in its last outing.

Playing the Calgary Flames — a club that had three straight defeats and lost four of five in regulation, including an embarrassing 7-1 loss to the Edmonton Oilers — the Leafs were unable to match their opponent's desperation and intensity in Monday's 3-0 loss.

"It's a great challenge," veteran forward Jason Spezza said of trying to manufacture urgency. "One of the fun parts about being on a team that's having success is you get other teams' best every night. It's going to push us, it's going to force us to play the right way.

"On nights you don't play the right way, you're going to lose."

Keefe said Thornton, Hyman, Muzzin and Andersen remain day-to-day and all could be available for Wednesday's rematch with the Flames at Scotiabank Arena. Campbell, meanwhile, took part in his first full practice since getting hurt last month in Calgary.

"You expect in a year like this that there's going to be injuries," Spezza said of the compressed 56-game schedule featuring solely divisional play against Canadian rivals due to COVID-19. "We have to find a way to get points and get wins and keep moving in the standings. We miss those guys. We miss the personalities. You miss the confidence they bring.

"You've got to stay focused and figure out what your role is that night and give yourself the best chance to win."

Toronto has done a decent job replacing its injured forwards with depth, but losing Muzzin for any length of time could be a different story. Justin Holl, who's been partnered with the hulking blue-liner most of this season, said Muzzin's presence is missed on and off the ice.

"He's a huge loss," Holl said a day after lining up with the promoted Travis Dermott on Toronto's second pair. "But as we've talked about before, this is a business where it's the next man in, and the next man's expected to perform."

The Leafs' power play remained tied for first overall heading into Tuesday's action despite going 0 for 7 versus the Flames, including a potentially game-changing two-man advantage for 1:36 in the second period where a unit featuring NHL goal leader Auston Matthews and Mitch Marner — tied for second in points through Monday — didn't really threaten.

Marner said Toronto needs to do a better job getting to the dirty areas for second and third opportunities.

"You're going to score a couple from the top every once in a while," said the 30-point winger. "But we've got to make sure we're ready to put a couple home in the paint."

Spezza said the power play was too deliberate and slow with the puck Monday, something that was a focus at practice — Toronto's first full session since Feb. 14.

"We need a little more of that attack mentality," he said. "We're the top power play in the league right now, so teams are going to kill (penalties) a little bit differently. It's up to us to adapt to that. But first and foremost it's getting back to that workman-like mentality, getting second chances.

"A lot of times our best looks come after shots and rebounds and (puck) recoveries."

The Leafs sit with a 14-4-2 record through 20 games — their best start points-wise since 1993-94 — thanks to a high-powered offence that has finally been complemented by a commitment to structure and play without the puck.

"Defending with numbers gives us a chance to win every night," Keefe said. "A lot of the details inside of that, we're still working at, but that's been a foundation that we've worked at since the start of camp.

"It hasn't been perfect through 20 games, but it's been really the foundation to give us the chance to compete and be consistent."

Spezza said the next step is to cut down further on chances against, especially when they have the lead.

"We've been a bit up and down," he said. "We've won games where we haven't been at our best ... we've lost games when we've been pretty close to our best.

"We've got to try and keep the same work ethic every night."

And that means this talent-loaded roster matching their opponent's desperation from puck drop.

"You've got to do it through your own pride and accountability and leadership," Keefe said. "We're not comfortable around here at all. We've got to continue to push and get better.

"There's still a lot of hockey to play."

This report by The Canadian Press was first published Feb. 23, 2021.