SALT LAKE CITY — A Utah girl whose football skills won her fame online has lost her court bid to have school districts create football teams for girls.
Mar 2, 2021 11:50 AM By: Canadian Press 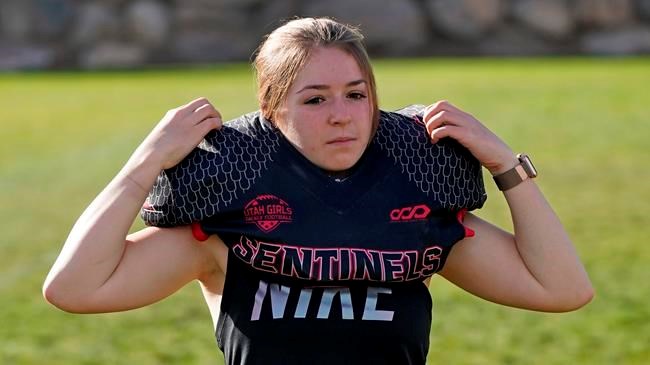 A federal judge ruled against Sam Gordon on Monday, finding that Utah school districts aren't legally required to create a separate team because girls who want to play football can play with the teams traditionally filled with boys.

U.S. District Court Judge Howard Nielson acknowledged that schools and coaches could do more to encourage girls to play. But he also acknowledged concerns that without Gordon's star power there might not be enough girls to keep a league running that would have to be built from the ground up since no other high school in the U.S. has a similar program.

Gordon's playing videos have racked up millions of views on YouTube since she was 9, but she and other female players argued they were worried about playing with physically larger boys as teenagers.

The case also included testimony about the harassment girls have endured while playing with all-boy teams. Gordon argued plenty of girls were interested in playing, pointing to an all-female league she started with her father six years ago that’s drawn hundreds of girls from the Salt Lake City area. Those numbers show girls want to play and could fill a roster, her lawyers argued.

But U.S. District Court Judge Howard Nielson disagreed. He found that no district policy had discouraged girls from playing, and that any harassment would violate athletic association rules. While schools and coaches could do more to accommodate girls, “the court is not convinced that it is required by the Constitution," he wrote.

He also found the districts raised significant questions about whether there would truly be enough girls within the district boundaries to build up a large enough team without Gordon, who is now 17 and has appeared at the ESPN awards and in Super Bowl commercials. A smaller team could increase the risk of injury, he found.

The districts were represented by Assistant Utah Attorney General Rachel Terry, who said she was pleased by the ruling and the finding that they did not violate the Equal Protection clause or Title IX.

Brent Gordon, Sam Gordon’s father who is also an attorney, said he and his daughter will continue their own work to expand football opportunities for girls in Utah.

“We appreciate the Judge’s efforts to have this trial during the pandemic so that the girls’ stories could be told and voices heard,” Gordon wrote in a statement. “Those voices will continue until equality in athletics is reached in Utah and across the country.”

Eppolito is a corps member for the Associated Press/Report for America Statehouse News Initiative. Report for America is a national service program that places journalists in local newsrooms to report on undercovered issues.