Quarterback Vernon Adams Jr. confident Montreal can pick up where it left off in '19

Vernon Adams Jr. is getting a head start on the 2021 CFL season. The Montreal Alouettes' starting quarterback is already at his apartment in the city completing his 14-day quarantine after arriving from his off-season home in Seattle.
Jun 18, 2021 1:48 PM By: Canadian Press 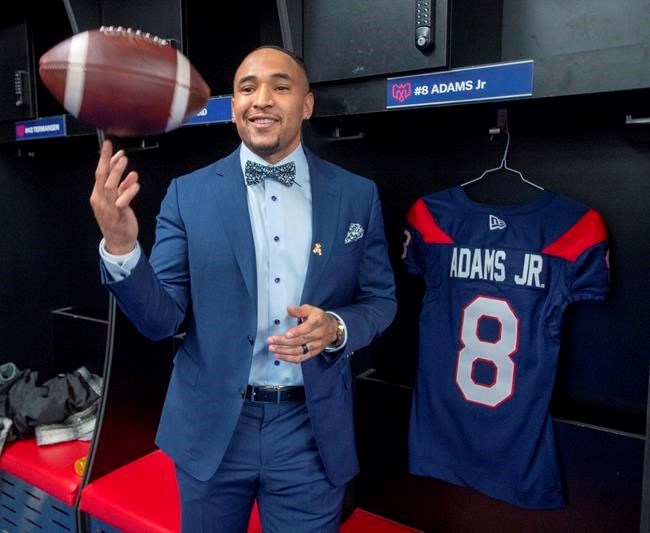 Vernon Adams Jr. is getting a head start on the 2021 CFL season.

The Montreal Alouettes' starting quarterback is already at his apartment in the city completing his 14-day quarantine after arriving from his off-season home in Seattle. CFL training camps don't open until July 10.

"I wanted to get here, get settled, get my quarantine out of the way, get around the coaches and organization and make sure we're all on the same page and ready to go," Adams Jr. told reporters Friday during a video conference. "Do some community work around the city, safely, just do what I can to get ready and locked in.

The CFL's board of governors voted Monday to begin a 14-game season Aug. 5 and open camps in July. The league didn't play in 2020 due to the COViD-19 pandemic.

"I just had this feeling we couldn't go two years in a row without playing," Adams Jr. said. "I'm just glad we got that good news."

The 2019 season was one to remember for Montreal under head coach Khari Jones. Adams Jr. took over as the starter once the campaign began, posting a 10-5 record and leading the Alouettes (10-8) to second in the East Division. It was their best effort since 2012 and first playoff berth since 2014.

Montreal's campaign ended with a 37-29 home loss to Edmonton in the East semifinal. Adams Jr. finished with 3,942 passing yards, 24 TDs and 13 interceptions while rushing for 12 touchdowns, tying him for the league lead.

But Adams Jr. isn't resting upon his laurels.

"I just feel like I've got the organization behind me, they believe in me and it just makes me more comfortable," he said. "But back in 2018, we had six different quarterbacks playing and I was always looking over my shoulder.

"Yeah they trust me and they're saying I'm the starter. Now I need to show them and prove to them and everybody that I deserve to be the starter."

Montreal will have plenty of veterans back on offence, including running back William Stanback, who ran for 1,049 yards in 2019 before signing with the NFL's Las Vegas Raiders.

On Friday, Adams Jr. donned the No. 31 jersey of Montreal Canadiens goaltender Carey Price. The North Division-winning Canadiens are facing the Vegas Golden Knights in the Stanley Cup semifinal.

"In 2019 we went to a few games and that was my first time going to go see hockey in person and just watching it, period," Adams Jr. said. "I've been following them pretty much all of the playoffs and it's exciting to see.

"Everybody was doubting us and people were doubting them. They're doing good, I'm excited to see them doing good."

Adams Jr., who says he has been fully vaccinated, is confident Montreal can pick up in 2021 where it left off in 2019.

"We've got pretty much a majority of the offence coming back and I think our chemistry should be there," he said. "There might be a little rust, there might not, but, hey, let's go.

The Alouettes will open the season with a bye week before heading west for their first two regular-season games (at Edmonton on Aug. 14, at Calgary on Aug. 20). Their home opener will be Aug. 27 against the Hamilton Tiger-Cats.

"I think it (opening-week bye) could be an advantage for two reasons," Adams Jr. said. "First, we're going to get out of training camp without having played football for so long . . . so we get an extra week to come together, get into the training room to make sure we're good.

"Secondly, we get to watch our opponent for the next week. Nobody gets to watch us and we get to watch what they did. Initially, I'm not going to lie, when I saw it, I was like, 'Oh no.' Then I thought about it and was like, 'OK, that's smart. We can do that' We're going to work with it and do our best to get that first-round bye (by finishing first in East standings)."

This report by The Canadian Press was first published June 18, 2021.