SEVILLE, Spain (AP) — The chances came and went but neither Spain nor Sweden managed to put any of them in the net Monday in a 0-0 draw at the European Championship.
Jun 14, 2021 2:13 PM By: Canadian Press 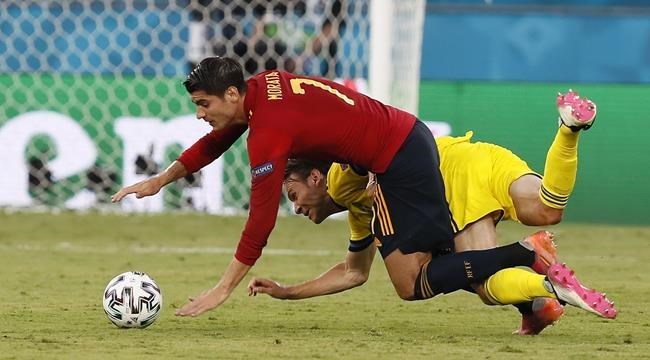 SEVILLE, Spain (AP) — The chances came and went but neither Spain nor Sweden managed to put any of them in the net Monday in a 0-0 draw at the European Championship.

Spain dominated possession and stayed close to the Swedish net for most of the match but couldn’t capitalize on its many scoring opportunities at La Cartuja Stadium.

Sweden looked dangerous only on rare occasions. The team came close to breaking the deadlock near the end of the first half when Real Sociedad forward Isak Alexander had his shot from inside the area hit the post after deflecting off Spain defender Marcos Llorente in front of the goal line.

Álvaro Morata had Spain’s best chance just a few minutes earlier but his shot missed wide with goalkeeper Robin Olsen the only opponent to beat inside the box. Olsen also saved a close-range header by substitute Gerard Moreno in the 90th minute.

Early in the second half, Marcus Berg misfired inside the area for the other good chance wasted by Sweden.

In the other group match, Slovakia defeated Poland 2-1 in St. Petersburg.

Spain’s matches at Euro 2020 are being played in Seville instead of Bilbao — the original host city for Spain — because the high contagion rate of the virus in the northern city wouldn’t allow for many fans to attend games.

A limited crowd of 12,517 attended the match at La Cartuja, where Spain will also play Poland on Saturday and Slovakia on June 23. A quarterfinal match will also be played at La Cartuja.

Sweden, which hasn't advanced past the group stage at the European Championship since 2004, next faces Slovakia on Friday in St. Petersburg.