Recent downpours of rain in the Powell River area sandwiched between hot and dry spells have given the popular, albeit invasive, blackberry a perfect environment to flourish.
Aug 9, 2019 6:00 AM By: Powell River Peak Staff 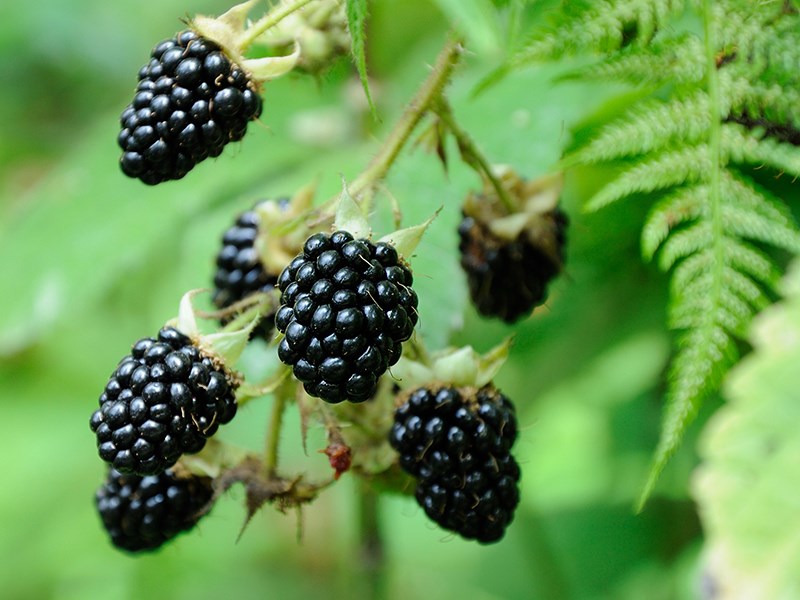 Recent downpours of rain in the Powell River area sandwiched between hot and dry spells have given the popular, albeit invasive, blackberry a perfect environment to flourish.

Timing could not be better, with the “plumping up” of the versatile fruit coinciding with Blackberry Festival, which kicks off next week. Vendors, groups and organizations with booths at the annual Blackberry Street Party next Friday, August 16, need not panic.

Weather may not have cooperated in past years, or the berries simply were not ripe in time, but the abundance this year is more than enough to satisfy all awaiting recipes. Fresh is best, but using frozen from the year before, or even (gasp) store-bought berries, was sometimes necessary to ensure everyone’s favourite dessert or blackberry-themed entrée made it on the menu. This year, all it takes is a little initiative, the right location, and perhaps gloves and a long-sleeved shirt, just to be on the safe side.

Several events will feature blackberries throughout the festival, including a High Tea in Townsite on Wednesday, August 14, and a Blackberry “Jam” musical event in the same neighbourhood the following day. After the street party, once everyone has filled their bellies with goodies and walked a couple of miles up and down Marine Avenue, a fireworks display will conclude the festivities. None of these events would exist without the efforts of a volunteer group of organizers, and the devoted pickers of the festival’s namesake.

Even though new housing developments have eliminated favourite picking spots in some areas, new hot spots are popping up everywhere. Some pickers are referring to the current abundance of blackberries as the “crop of the century.” Since that only encompasses the last 19 years, a few have been even more bold and used “crop of the millennium” to describe the abundance.

One enthusiastic picker recently exclaimed, “What a great crop, and there aren’t even any worms, yet.” How is that for a selling point to get out there before the current window of opportunity closes?

Another blackberry aficionado pointed out that “blackberries can be turned into wine, so pick ‘em before they turn.” But the worm works in tequila, right? So what’s the rush?

Whether blackberries are picked for a dessert, to accompany a beverage, or to eat on their own, most avid pickers have their own secret spot, even if they’ve had to source out a new one. Most also follow the basic rule of picking above waist height, just to stay out of the dog (or people) pee zone.

Worms don’t sound so bad now, do they?

Editorial: B.C. health leaders need to focus more on disease control and less on message control
May 12, 2021 8:05 AM