Prest: The Olympic Games are somehow weirder than ever 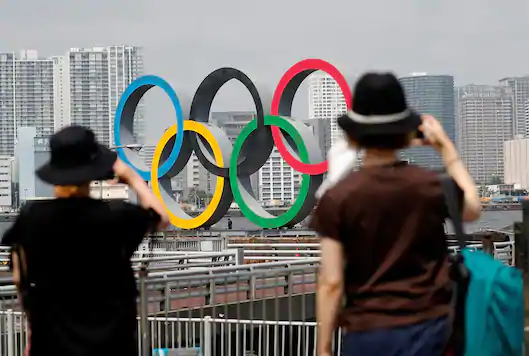 Bystanders watch as giant Olympic rings are reinstalled at the waterfront area at Odaiba Marine Park, after they were temporarily taken down in August for maintenance amid the COVID-19 outbreak, in Tokyo, Japan Dec. 1, 2020. REUTERS/Kim Kyung-Hoon

Mistake No. 1 for the International Olympic Committee regarding the Games set to begin Friday in Tokyo was the insistence on still calling these the 2020 Olympics even though they are being held in 2021.

Like, really? You had the chance to distance yourself from 2020 – one of the weirdest, most depressing years we’ve ever experienced – and you decided you want to keep that brand on your event? You still want that 2020 stink?

What new events are there? Synchronized sanitizing?

Who is your beer sponsor? Corona?

No matter what they are called, these Games will go on, because there might still be money to be made. They’re going to be super weird though – Japan just happens to be in a state of emergency due to the pandemic.

But … you know we’re all still going to be obsessed with the Games as soon as they start, watching approximately 27 hours of Olympics every day. So what should we be watching for? Here are some things to look out for as we get set to dive into the COVID-19 2020 Olympics in 2021.

The COVID situation is so bad in Japan that they’ve completely banned all spectators from all venues, indoor and outdoor, in and around Tokyo. A few venues outside of Tokyo will allow a limited number of spectators from Japan – foreign spectators were banned months ago – but for the most part these games will be held without fans. It’s basically just a TV show now. The Tokyo venues are going to be so quiet you might think you’re at a pre-COVID Vancouver Canucks home game.

Maybe if this actually works out OK, it’ll send a strong message to the IOC that they don’t have to absolutely plunder some poor host city every two years when they can just bring in some nice cameras and rent out a rec centre for $175 an hour.

At any other Olympic Games, if you heard that an athlete tested positive, you knew that they were a drug cheat and they were about to lose their medal. This year testing positive is still negative, but it means that you’ve got the ’rona and you’re about to be sent into quarantine and then sent home. No Games for you.

It could be a real quagmire. Remember all the fun excuses athletes would give when caught using drugs? My Gatorade was spiked. I drank too many beers and had too much sex. I’m American.

What are the COVID-19 excuses going to be like? Actually … all those listed above would suit this situation too. On your mark, get set, test!

Speaking of too much sex, the weirdest story emerging out of Tokyo one week before the Games were set to begin was the rumour that cardboard beds were put in the athletes’ rooms, reportedly designed to break under vigorous activity. You know….

I suppose it could be smart to try to keep the athletes from consorting and coupling too much during such dangerous times. The story never quite made sense though – did they think that there’s no way the fittest people on earth could find a way to conclude a tryst whilst standing up, or sitting on a chair, or hanging from a ceiling fan, or on the pommel horse, or...? Coming up next: the floor exercises!

The story about the "anti-sex" beds has since been debunked. They are made of cardboard, but they are also quite sturdy and able to withstand a fair bit of bouncing, as demonstrated by a gymnast who posted a video of himself jumping up and down on his bed. They're made of cardboard so they can be recycled at the end of the Games, which actually sounds kind of neat. But I do pity the poor guy who has to take out the recycling the day after the Games end.

Among the sports making their debut are surfing, skateboarding and sport climbing. Surfing hasn’t caught my fancy as a TV sport. All I want to see is that “tube” thing. Did that guy tube? A bit of tube? No tube? Meh.

Skateboarding is cool, in a “it makes the squares nervous” kind of way. The one that could be a sneaky success, though, is sport climbing, particularly for viewers here on the North Shore. The two athletes competing for Canada happen to be Sean McColl and Alannah Yip, lifelong friends from right here in North Vancouver.

It’s an exciting sport, and McColl in particular comes in as a medal contender and could be a breakout star for Canada, finally getting his shot at the Olympics after an illustrious climbing career. They’re both fascinating athletes (read more about them on page 20 of this paper), and it’ll be fun watching them make a little Canadian Olympic history.

These will, no doubt, be history-making Olympics. What that means is yet to be seen. But it’s time to light the flame and start the Games. Faster, stronger, higher – and that’s just the nasal swab.

Andy Prest is the sports and features editor of the North Shore News. His lifestyle/humour column runs biweekly. aprest@nsnews.com