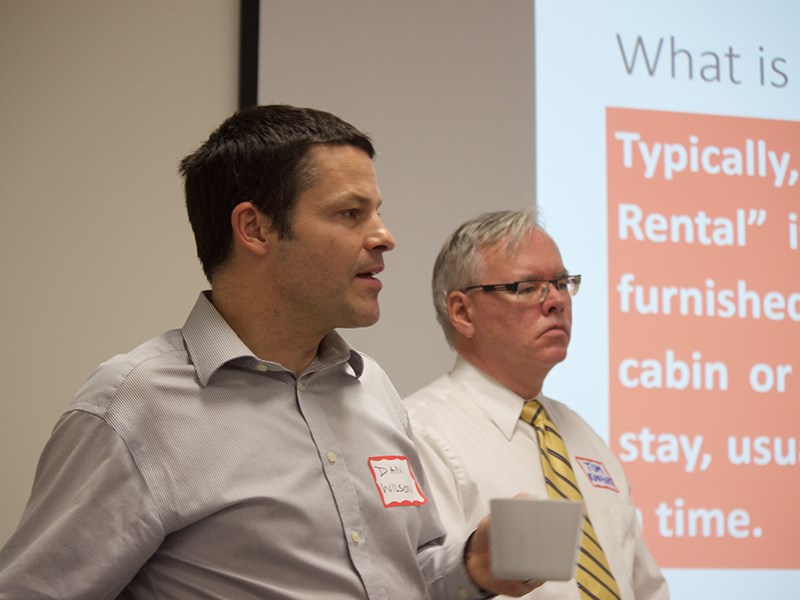 Regulation is coming for short-term rental accommodation in Powell River. The city has begun a community-engagement process for input into the way rentals will be allowed through online booking platforms such as Airbnb.

Many small municipalities, especially those seeing an increase in tourism, are grappling with the issue.

Currently, no rules apply to short-term rentals and any registration, regulation or restriction is a direction Airbnb user Michael Gelber, who lists a vacation rental on the online marketplace’s website, does not want to go.

Gelber said the only option for short-term rental to be viable is through a permissive business environment with no restrictions on location and requiring no registration or taxation.

“Let it go and see what happens,” said Gelber. “Maybe that makes an impact on the long-term rental market, but I don't believe so. It's been clearly explained that the rental market is completely separate from the Airbnb market.”

The two are linked, according to City of Powell River councillor Rob Southcott, who was in attendance at the meeting.

“In Powell River, the main concern is rental housing,” said Southcott. “We have a rental-housing crisis and we can say unequivocally it is widely recognized that short-term rentals have an influence in that situation.”

City council has directed staff to draft a strategic plan and report back on opportunities for regulation of short-term vacation rentals, according to city senior planner Jason Gow. The direction to raise short-term rentals to a higher priority item is on council’s action list, he added.

At the first public-information session, attended by approximately 30 people on January 17, and through an online survey that is active until January 31, city council is collecting information on how to manage the unregulated rise in the number of short-term vacation rental properties.

“Getting ahead of this issue with the advantage of learning from other jurisdictions will help Powell River best facilitate a balanced policy that realizes the positive values and potential of short-term rentals in our region while mitigating many of the negative effects,” said Sunshine Coast Tourism executive director Paul Kamon.

The growth of tourism in the region and availability of Airbnb accommodation is an area of interest as the market and visitor profiles change.

A short-term or vacation rental is typically defined as a full suite, home, apartment, cabin or condominium, and sometimes rooms, for periods fewer than 28 days. They do not include bed and breakfasts.

“In the sake of fairness, we're going to find a way that may require us to modify our existing business-licence bylaw to change the language in terms of what is a business and what isn’t,” said Gow. “If nothing else, we're going to look at levelling the playing field between the existing B&B operators who are legitimately getting a business licence and operating, and those who aren’t.”

Only one bed and breakfast business is currently licensed in Powell River.

Centre for Sustainability community planning and monitoring specialist Dan Wilson, who has been contracted by the city to help develop a plan for short-term rentals, said people entering the vacation rental market do so for a number of reasons, including paying down mortgages and lines of credit, increasing disposable income and to make ends meet.

“People still have mortgages to pay and things to do, but they're kind of getting fed up with the issues they've had with long-term rentals, so they're trying to find other ways to monetize their asset,” said Wilson.

People are not going to become rich off Airbnb, with an average revenue between $5,000 and $7,000 annually, he added.

Wilson outlined various scenarios adopted by other jurisdictions in the province, including outright bans on short-term rentals, regulated conditions and an open, unregulated market.

The process from public input to bylaw can take from four to six months, but Gelber and others who attended the meeting want the city to move slowly.

“We've been studying this for a year and a half, so we are going slowly,” said Southcott. “There is going to be regulation here. This is our first hit at public consultation.”

As of last fall, Wilson estimates there were approximately 121 short-term rental listings in the Powell River area, most of which composed of entire houses within the city limits and in residentially zoned areas. Of the places listed online, most are renting for fewer than seven days, according to Wilson.

“When you start getting into residential areas, it can become a little more complex,” said Wilson. “There are tax implications.”

Wilson said people who are living in a residential dwelling and running a commercial business are paying residential taxes and commercial taxes, which is paid year-round, whether the accommodation is rented or not.

Southcott said this is the start of an engagement and planning process to develop an idea of where the city may go in terms of regulation.

“Now it's a matter of how and that's why public input is absolutely vital and people need to get on that survey to influence what the regulation is going to look like,” said Southcott.

For more information, go to surveymonkey.com/r/powellriverstr.