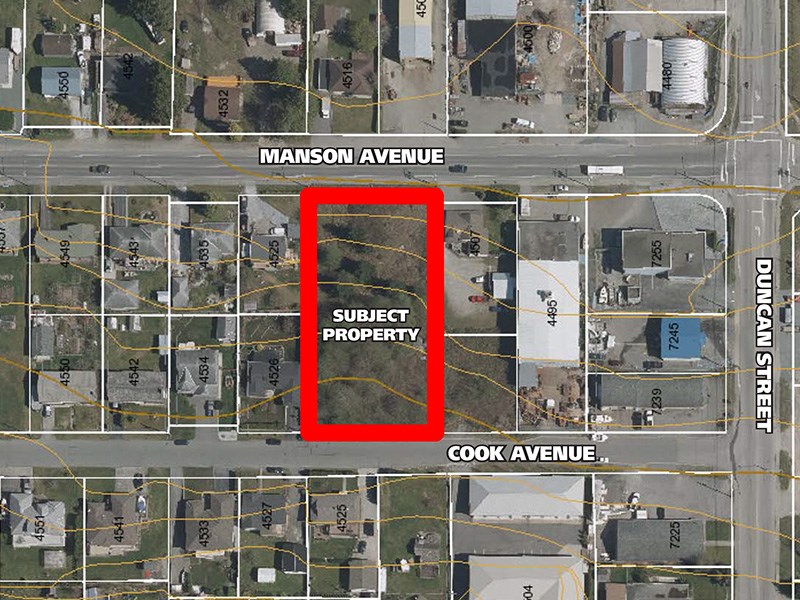 A six-lot Manson Avenue housing development will provide Powell River’s new construction home market with something it has not seen recently: smaller homes.

Powell River home builder Henderson-Edwards Developments has requested City of Powell River council provide a rezoning for a vacant lot currently zoned for townhouses near Duncan Street to a zone that would allow the developers to subdivide the lot into six parcels for the construction of houses, each around 1,000 square feet.

In his report on the development, city senior planner Jason Gow told the city’s committee of the whole on September 5 that staff acknowledges the proposed houses exceed the footprint normally associated with the tiny-house movement.

“This development should instead be viewed as a small step forward in our community where houses are being built to measure between 1,800 to 2,000 square feet on average,” said Gow.

Improving housing diversity and affordability is a stated goal in the city’s integrated community sustainability plan.

Henderson-Edwards Developments co-owner Darren Edwards said he recognizes the city is looking for something more in line with the tiny-house concept and is interested in moving in that direction.

“We're kind of just getting our feet wet,” said Edwards. “If our footprints are getting smaller, then we can hopefully appeal to some younger generations and get them into first-time home-buying situations.”

Once subdivided, the six lots will each measure 14.22 metres by 39.97 metres with an area of 568 square metres or 0.14 acres with frontages on Manson and Cook avenues.

Edwards owned the vacant lot 20 years ago and had it rezoned for townhouses. At that time, he had planned to construct low-income, two-storey townhouses there, but a restrictive covenant put on the lot by the previous owner restricting height stopped the development. He and his partner sold the lot and it has sat vacant ever since.

At a carriage house public forum on September 14, Gow said the city planning department will start looking at regulations that will allow for actual tiny houses. The city currently has a bylaw prohibiting homes with a square-footage of less that 600 square feet.

Edwards said the market for homes today is different than in the 1990s. If the Manson development proves to be successful, he said his company will look for parcels where even smaller lots can be developed into tiny houses.

Edwards, who also attended the carriage house forum, said the city has been very thoughtful with its drafting of regulations that allow for the secondary homes.

He said limiting the maximum size to include all the out-buildings will ensure that lots retain their yards, but expressed concern that not enough parking was being required.