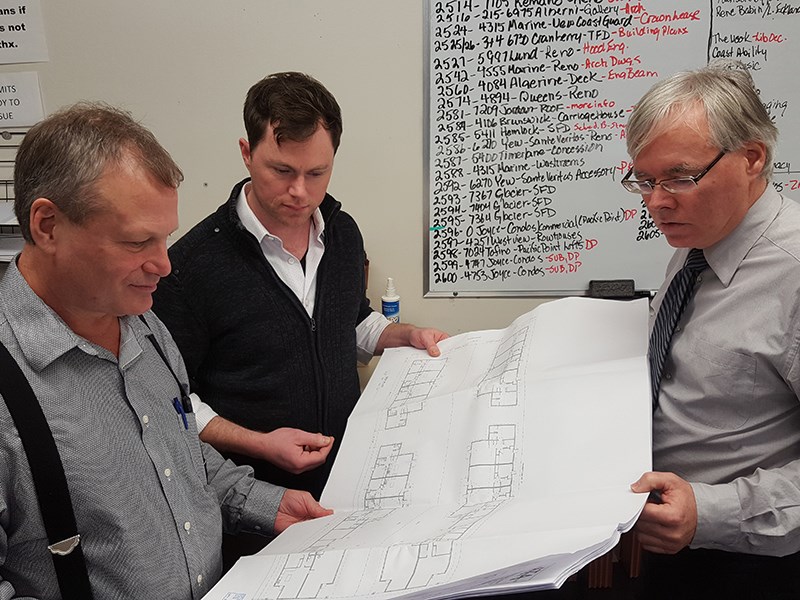 On the surface, building permits issued by City of Powell River for 2017 compared to 2016 are down by approximately $850,000, which goes against everything indicated from builders and city hall throughout last year.

Residents should not be fooled by the numbers though, according to City of Powell River director of planning Thomas Knight. The building business was booming and will continue in 2018, he said.

Year-to-year comparisons were released on January 2.

The biggest reason for the discrepancy, according to Knight, is city staff cannot keep up with the demand.

“We have $5 million worth of building projects that came in November and December that we haven't even processed yet,” said Knight. “If we had the staff contingent here to be able to process, we would have had $20 million.”

According to Knight, even more revenue is waiting because builders, anticipating changes to the BC Building Code in 2018, hurried to get plans into the approval process before the end of the year.

“We ended up getting another $15 million worth of projects just before December 31,” said Knight, “so we have $20 million dollars worth of construction we haven't even issued permits for yet.”

There is lots of talk about the code changes, but no one really knows exactly what all of the changes will be, according to local contractor Al Austin.

Austin said that is the reason he pushed to provide plans to start the application process for approximately $3 million in building value he has planned, including his project behind Crossroads Village Shopping Centre.

“We haven't finalized,” said Austin. “We were going to put the applications in January, but all we did was rush it along a month.”

One specific part of the code pushed builders to file their plans before the end of 2017. Developers do not know what direction the city will take with the BC Energy Step Code.

The code has been discussed by the city’s sustainability committee and will be brought before committee of the whole at the end of January.

“Builders may be anticipating the city adopting the Energy Step Code, which came into effect on December 15,” said City of Powell River councillor and sustainability committee chair CaroleAnn Leishman.

Leishman said the city will have to decide if it wants to adopt the code, and at what level of energy efficiency.

The code outlines steps for the building sector and municipalities to meet net-zero energy targets for all new buildings by 2032.

Meanwhile, most of the city’s new residential building value from 2017 came from single-family home construction, but that will likely shift in the coming year, according to Knight.

Not only do the numbers point to a big year ahead for permits issued and building value in Powell River, Knight said almost all of the money going into residential creation in 2018 is in multi-family residential, including strata and condominium projects.

“Multi-family is really starting to address some of the gaps we've always had in housing in this city," said Knight, "so it's really great that we're getting more of the local builders stepping up and saying, 'We see a real market here for people who want to downsize from their existing housing into something that might be 800 to 1,200 square feet.’”