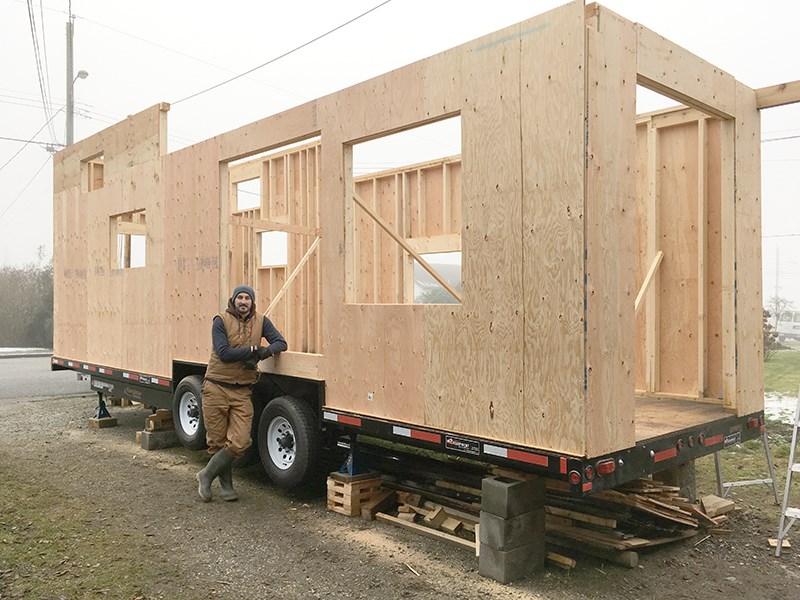 Reasons to consider living in a smaller dwelling range from simplifying life and lowering costs to leaving a smaller environmental footprint. For tiny-house builder Matt Emig, it is also about taking ownership. Similar to many young people, Emig found himself unable to enter into the real estate market.

“For a couple of years I’ve been dreaming about building a proper house,” said Emig. “I couldn’t afford to buy the land for that.”

Emig decided to take matters into his own hands. He is currently custom designing and building his first tiny house at his parent’s property in Westview. In some ways, it is a new spin on the concept of a starter home as it will give Emig living space, a tangible asset and a potential revenue stream in the future, he said.

“The plan is to live in it for a while, and at some point I’d like to move it to a holiday destination and rent it,” said Emig.

According to BC Tiny House Collective co-founder Anastasia Koutalianos, the Upper Sunshine Coast is an ideal place to explore the concept of alternative living spaces because of current zoning regulations.

Koutalianos said she believes that gives the region a good opportunity to try a pilot project.

“It’s really about education and testing the appetite within your community,” she said.

Regions such as Powell River can more easily try out alternative forms of housing and green technologies in comparison to larger cities, which face more barriers and are more risk averse.

Within the municipality, however, there are bylaws.

“We’re different from the regional district,” said City of Powell River director of planning services Thomas Knight. “The city has its own building bylaw and it also has its own zoning bylaw. We have a whole range of things we ask for that a regional district doesn’t do.”

This includes a 600-square-foot minimum for a dwelling within the city, along with a host of other requirements. However, Knight said local council is very interested in looking at housing alternatives.

“We have an interesting council in that a number of them think outside the box and are looking at alternative housing styles. You don’t always see that with councils,” said Knight.

Another part of the equation is changing perceptions about what tiny houses can be.

“They don’t have to be these shabby little caravans; it’s not a travel trailer or an RV, it’s a house,” said Koutalianos. “It has all the same amenities as a micro condo, small apartment or any other small dwelling we find acceptable.”

Emig said he is designing his home to be off grid, self-sustainable and run on propane and solar power. While he is a proponent for the minimalist, ecological philosophy surrounding tiny homes, that is not what ultimately drives him.

“There’s something quite primal about building your own home and living in it after; that’s the part that excites me the most,” said Emig. “Being able to custom-design your life around that seemed like a fun challenge.”