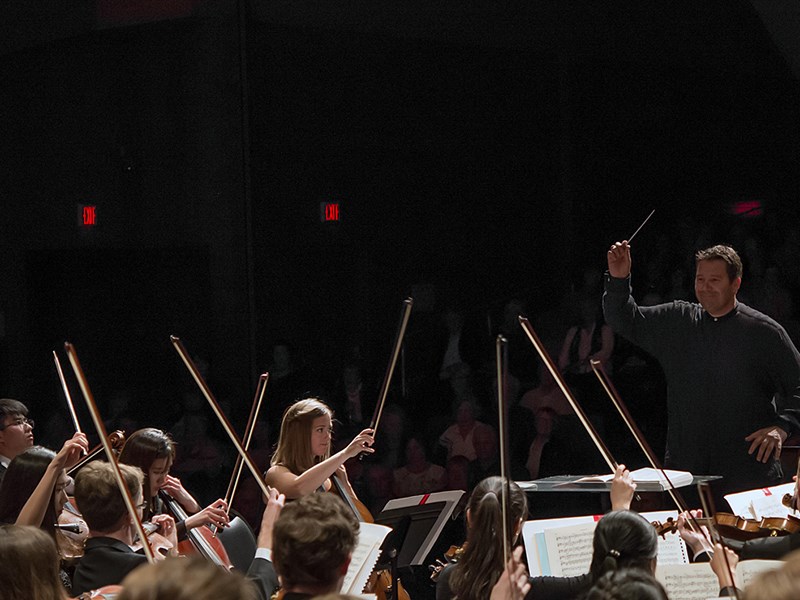 Attendees of the 2018 Pacific Region Summer Music Academy (PRISMA) Festival may notice a few extra bodies on the Evergreen Theatre stage during this year’s symphony concerts. The organization is just days away from welcoming its biggest student orchestra to date, featuring 90 musicians from 18 different countries.

“Part of the reason is we have the repertoire that needs it,” he says, citing works such as Ottorino Respighi’s poetic Fountains of Rome and Igor Stravinsky’s infamous Rite of Spring, which call for large orchestras. “The other part is that our Musical Merit Scholarship Fund has grown and there are more resources available to help students come to PRISMA.”

“The audience is going to hear that the level of the orchestra is yet again higher because we’ve now attracted even higher-quality students,” says Arnold.

While most on this year’s enrolment list have never set foot in Powell River, several students will be returning to the community to reconnect with friends and mentors on the faculty and in the orchestra.

23 world-class professionals from top ensembles around the globe will spend June 11 to 23 sharing their knowledge with aspiring symphony players and celebrating a common love for music. Among them will be virtuoso Máté Szűcs, principal violist from the Berlin Philharmonic, and principal players Michael Gieler and Laurens Woudenberg from the Royal Concertgebouw Orchestra, masters of the viola and French horn respectively.

“I’m looking for enthusiastic musicians who find it important to share their knowledge with the next generation of musicians and keep this treasure alive,” says Arnold.

According to pianist Edwin Sungpil Kim, a featured soloist and guest artist at PRISMA since 2014, a big part of the festival’s charm lies in its ability to dissolve so much of the hierarchy between student and teacher.

“Beyond knowledge, there is a lot to pass on that is important in life and as a human being, and PRISMA is particularly nurturing in this aspect,” says Kim. “I love working with fellow guest artists who have so much life experience and wisdom.”

In addition to multiple ticketed symphony concerts at Evergreen Theatre and the free PRISMA on the Beach event, the festival will feature an evening of chamber music played by faculty members and select students, a performance of exclusively BC compositions and a multi-round concerto competition that will be sure to have audience members on the edge of their seats.

But what about the heavy metal headbanger who has not given much thought to chamber music, or the iPad-obsessed teen who has only ever experienced a symphony on YouTube?

“I would say they should come to the Gala Opening Concert on June 14 because you’ll get a little bit of everything,” says Arnold. “It so rarely happens in a single evening that you’re able to see a solo performance, and then a full orchestra, and all different configurations in between.”

Arnold also recommends seeing Szűcs perform at any concert during the first week of the festival. The violist has been tapped to play the solos on several pieces, including the formidable obligato part in Hector Berlioz’s Harold in Italy.

“He’s one of the top players in the world,” says Arnold. “You just don’t get much better.”

And, of course, the PRISMA Festival Orchestra is always a sight to behold, especially while playing the kinds of pieces that caused it grow so large in the first place.

“There is so much great music this year, but I’m seriously excited about the Rite of Spring on June 22 and 23,” says Arnold, “and Fountains of Rome on June 15. Respighi did things with the combination of instruments in the orchestra that nobody did. You really do hear the fountains and the water and the sunlight; it’s all described in the music.”

Tickets are on sale at the PRISMA office in Town Centre Mall, open 10 am to 5 pm Monday through Friday; or online 24/7 at prismafestival.com. Individual concerts are $25, festival passes are $90, masterclasses are $5 and  student recitals are free to the public.

Enhanced member and employee experience at heart of First Credit Union renovation in Powell River
May 26, 2021 6:55 AM