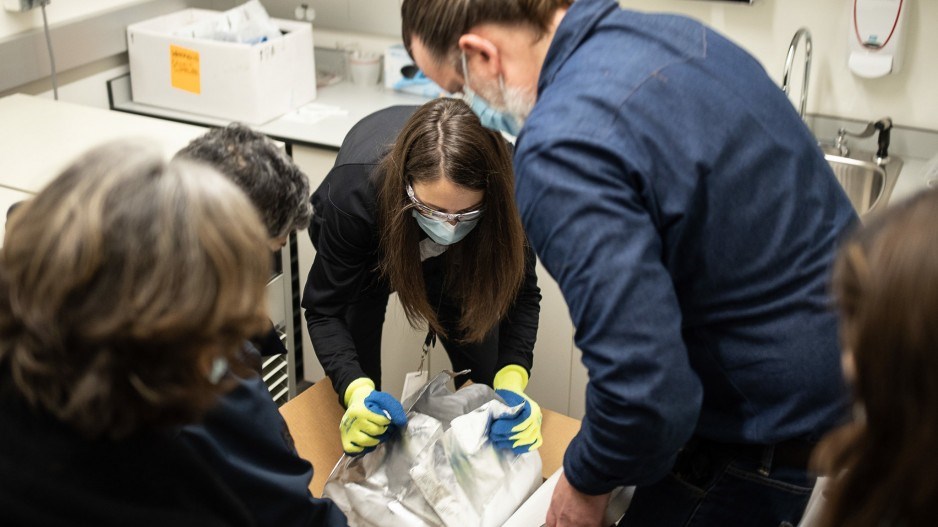 The first Pfizer vaccine doses arrive in B.C. in December.Flickr / Government of B.C.

“Starting next week, deliveries of the Pfizer-BionTech vaccine will start to resume at much higher levels and we expect to have a significant bump in supply in the coming weeks,” provincial health officer Dr. Bonnie Henry said during a Friday (Feb. 12) briefing.

“This will allow us to fully resume our province-wide immunization program, focusing as we have been in Phase 1 on the most at-risk of having severe illness or dying, and people who are in the frontlines of our health-care system.”

Health Minister Adrian Dix said 54,990 doses of the Pfizer Inc. are due to arrive next week after only a total of 21,000 doses were delivered the preceding three weeks.

Deliveries of the competing Moderna Inc. have also been throttled the past few weeks, leading to a major slowdown of both Canada’s and B.C.’s immunization efforts.

A day ago, Pfizer had not confirmed the number of doses set to be delivered in the final three weeks of next month.

Instead, federal officials were only able to confirm on Thursday Pfizer is due to deliver 404,000 doses next week, followed by 475,000 doses the last week of February and 444,000 doses weekly for the first two weeks of March.

No Pfizer shipments arrived in the country the last week of January, and Canada is only receiving 82% of the previously expected deliveries for the weeks of Feb.1 and Feb. 8.

Health Canada signed off earlier this week on relabelling the Pfizer vaccine, allowing immunizers to begin extracting six doses from each vial using specialized syringes rather than the previously agreed-upon five doses.

Moderna has not provided the federal government with delivery estimates for the last few weeks of March and Henry said some British Columbians may face larger gaps between their first and second doses (both the Pfizer-BioNTech and Moderna vaccines require two doses for maximum efficacy).

“We’ll be monitoring that as we go,” she said, adding she’s also interested in a U.K. study examining how effective vaccines are when the doses are mixed and matched between different manufacturers.

For instance, the study would look at the impacts if an individual was administered a Pfizer dose first followed by a Moderna dose a few weeks later.

With Manitoba embarking on plans to buy its own vaccine supply rather than rely on the federal government’s allocated supply, Dix would only say he’s interested in monitoring any developments that would create a more abundant domestic supply.

“Right now we’re focusing on the immunization of 4.3 million British Columbians,” he said.

Vaccinations for the broader population are set to roll out beginning in April once the province’s most at-risk individuals and frontline healthcare workers are immunized in the coming weeks.

After elderly British Columbians 80 and above, Indigenous seniors over the age of 65 and other hospital staff receive vaccines by the end of March, the province will move onto those who are 75-79 years old.

Vaccinations will then carry on in descending five-year age brackets.

Mobile clinics, in-house visits and digital records are set to play a critical role in the province’s efforts to administer doses to 4.3 million eligible British Columbians by the end of September. Those under 18 are not yet eligible but that may change as more vaccines are approved.

The current timelines are based only on the availability of Pfizer and Moderna vaccines, however, Canada has secured orders with additional manufacturers that be may be granted regulatory approval in the weeks and months ahead.

Clinics will be set up beginning in March across 172 B.C. communities in partnership with municipalities, businesses and volunteers.

At peak immunization capacity, the province will be relying on 715 full-time immunizers across all five health regions as it seeks to administer about 100,000 doses per day.

Mobile sites will also be deployed where necessary and home visits will be made possible for those unable to attend clinics.