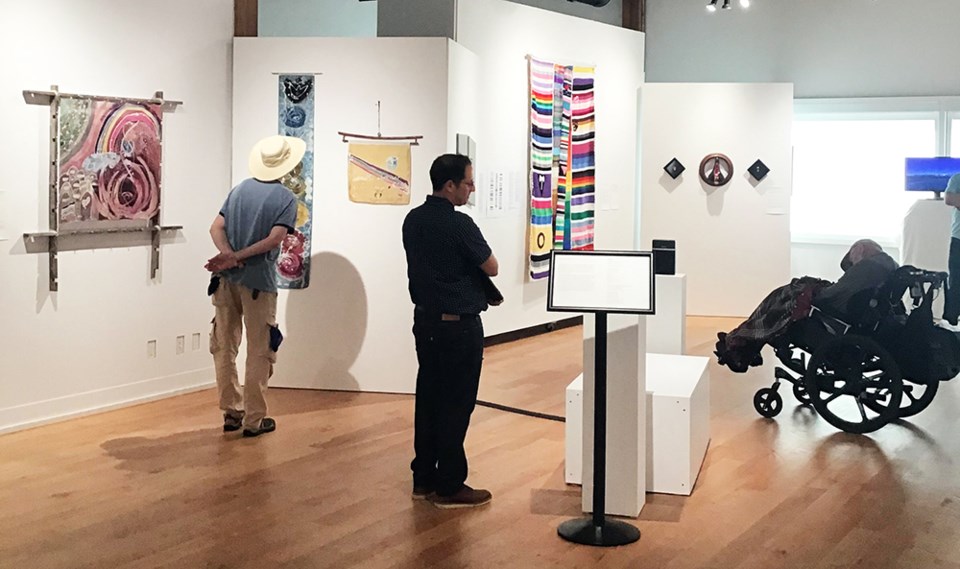 AWARDED FUNDS: An LGBTQ2S-plus art show that was held last year in the arts centre was part of a $15,000 grant given by the Resilience BC Anti-Racism Network for projects in Powell River. Powell River has been awarded another $15,000 this year and there will be a call put out to the community, looking for more projects that target racism or promote diversity, equity and inclusion.Contributed photo

qathet Community Justice, an organization under the Lift Community Services umbrella, is being provided $15,000 through the Resilience BC Anti-Racism Network to help combat racism.

Kathryn Colby, Lift manager of community development, said Resilience Powell River, which used to be called Organizing Against Racism and Hate, will be helping distribute the money, through the qathet community diversity, equity and inclusion working group.

Colby said efforts were made to make the anti-racism grants a community-owned and community-based process. She said that last year, Resilience Powell River asked people around qathet Regional District to come up with ideas to enhance or promote diversity, equity and inclusion for marginalized and specifically racialized people across the region.

“People made proposals to us for different projects or programs and we put that money into those programs,” said Colby. “For example, at the Powell River Public Library, outside of COVID-19, you could have multilingual story time, which means children could go and hear stories read aloud that have more than just English.

“Now, there is quite a robust collection at the library of various languages that we know from the census data are reflected in Powell River. That is something we will continue to maintain with this money, in partnership with PRPL.”

Colby said a beautiful mural was created and painted in the immigrant services welcome centre, which is now moving to a new storefront. She said it will be redone in the new location.

Contributions were made to an art show called What the Plus that involved LGBTQ2S-plus people from the qathet region who created a curated art show together.

“There was a large art show at the art gallery above the library and we helped to pay for that,” said Colby.

This year, with the $15,000, Resilience Powell River wants to put out similar grants to tender across the qathet region.

“The idea is that anyone across the city and regional district area from any unique community can come up with ideas to really just look at diversity and organizing against hate and racism,” said Colby.

She said there will be public announcements forthcoming to encourage people to apply for the funding.

Colby said Resilience Powell River takes on reports of discrimination or hate, so people can leave messages in any language they feel comfortable, to talk about what they may have experienced. She said last year there was a sharp rise, with the COVID-19 lockdown in Tla’amin Nation, of some stores that were refusing to let indigenous-looking people in.

“We hear about these things and we investigate and we refer the cases onto the most appropriate agencies,” said Colby.

She said another example involves people who have lived in Powell River a long time and may appear to be Asian, who are digging for clams, who are often met with discriminatory comments from people on beaches.

“I would encourage all people in qathet to look at what the census data says around who speaks what language and how people identify racially,” said Colby. “People would be really amazed how much diversity we actually have.”

She said anti-Asian hate has become more pronounced since COVID-19, so people who look even remotely Asian have come up against discrimination in town.

Colby said something to also keep in mind is commitment to reconciliation and what that looks like. She said it’s important that the stories of exploitation are told so Canadian culture can be examined and determinations can be made about what is and is not acceptable.

She said it’s important for people to remember that Canadians are living on indigenous soil.

“Our country exists the way it exists because of colonization and because of immigration,” said Colby. “It’s just a quiet reminder to people in this country that racism is something we have to face together. It’s our job as privileged people who don’t fit into a marginalized category to move the rights of other people forward.”

Colby said for people who witness or have concerns about discrimination or acts of hate, there is a special email address to report it: resiliencepr@liftcommunityservices.org. There is also a phone number and people can leave a message in any language: 604.485.2004, extension seven, and a Facebook page: Resilience BC Powell River, which people can access.