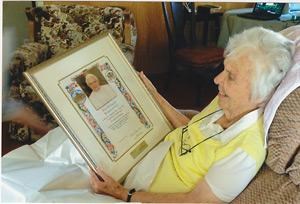 CWL was formed on November 17, 1935, and a month later, on December 18, its charter was granted. Rev. Leo Hobson’s mother was instrumental in forming the group and soon there were enough members to set up committees. Last surviving original Charter member Monica Behan, 94, still resides in Powell River and was honoured for her service with a papal blessing.

For the 75th anniversary, organizers spent an entire year pulling together details for the celebration, inviting guests and recreating and updating the menu enjoyed at the first meeting 75 years ago.

CWL is an organization which contributes to the life and vitality of the church, family and community, both at home and abroad. The CWL is active in Powell River providing food hampers, convening the candy booth at the Powell River Health Care Auxiliary bazaar, and assisting whenever a need arises. A family in India is sponsored as an on-going project, and pneumonia vests are knitted and sent to Third World countries for infants and small children who need warm clothing.

Members also support northern Missions, the white ribbon campaign against pornography, a scholarship for students of further education, and are instrumental in working with the national league in having a Christmas nativity stamp produced for the past couple of years. The CWL has been described as a “living body in the church, active in corporal and spiritual works.”