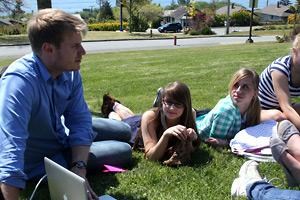 Since the Compassion Project started at Brooks Secondary School last year students report a positive change both in the general atmosphere of the school and in their own lives.

It’s this sense of positivity and the attitude that it’s cool to be kind that students involved in the project are working to spread to the general community with their Compassion Challenge on Thursday, May 26. On this day everyone in the Powell River region and even beyond is asked to follow the students’ lead and commit a random act of kindness that will make someone’s day just a little better.

It can be as simple as smiling at a stranger or as committed as mowing a neighbour’s lawn. All that the students ask is that the kind act be documented by a photo, video or a written story and submitted online. Students will then post the entries online and eventually on Compassion Walls out in the community. Their goal is to collect 10,000 documented acts of kindness.

Through campaigning the message that it’s cool to be kind, and that compassion can make a positive difference in a person’s life and the lives of those around them, students involved in the project report that a positive change has happened at Brooks. They say people are friendlier, that the number of little negative comments against people have been reduced and that the school is generally a happier, more positive place to be.

“I think this has helped people realize...how easy it is to hurt somebody else,” said Chloe Langmaid, grade 11. “It feels a lot better to be positive and support people rather than put them down.”

Chelsea Rickson, grade 11, noticed recently that a teacher seemed to be having a bad day. She decided to try and cheer her up by making her a greeting card and slipping it under her door, putting up sticky notes telling her she’s “awesome” and giving her a big hug. She said the gesture made her teacher’s day.

Aliya Sepkowski, grade 10, went for a walk in the rain with another friend not long ago and ended up at another friend’s house, who wasn’t home at the time. They used their dryer and warmed up in the house and decided to bake the family a cake before they left to thank them for the use of their house. She said her friend and her family were delighted to return home to find a cake waiting for them.

Miranda McDonald, grade 11, had a friend who was having a rough time on her birthday. To cheer her up McDonald and her friend made a batch of cupcakes at the school. They realized they had far more cupcakes than they could eat so they walked around the school and gave them out to teachers. She said the act of giving away the cupcakes, more so than even eating them, cheered her friend up and turned her birthday around.

The students believe the same change they’ve seen take place at Brooks can happen in the community at large.

“I think a lot of people get so busy and so caught up in their own lives,” said Sepkowski. “I think this will be refreshing for them to see what we’re doing as the youth in Powell River and we can be an example to them just to take a step back and think about other people.”